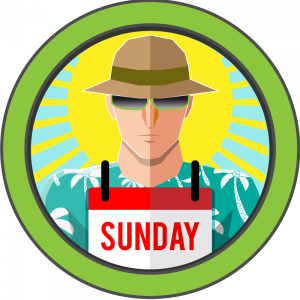 This was my first attempt on a Solaris machine and, even if the machine was not so difficult, I learnt a few interesting things about the OS. Ip will be 10.10.10.76, although I later edited my /etc/hosts file so that I could use just sunday (I was all the time using SSH so this was easier for me).

We start by enumerating open ports to discover the services running in the machine. I ran the following:

So basically we see that there is a finger service running on the machine, which is basically used to get information about users on a remote system: we got two usernames (sunny and sammy). The rpcbind listening on port 111 is not important at all, as it’s functionality is close to that of a DNS server. Seeing there was no entry point, I decided to run more thorough scans:

We finally got something! SSH listening on port 22022.

This part had to do with guessing, for we had two usernames and no passwords. I tried many combinations and eventually found one that worked: sunny:sunday

One odd thing I noticed was that my home directory wasn’t in the /home directory but in /export/home. However, after a quick google search I discovered it’s a convention in Solaris to use that location for the directory stored in the local hard drive. All other home directories will be in /home.

We don’t have reading permissions for user.txt so it looks like we’ll have to pivot and get to be sammy.

I did a manual search and discovered a strange directory in the system root:

The contents of backup.shadow were:

I didn’t have permissions to read agent22.backup so I decided to work on this file.

Besides, when running sudo -l I got an something I could run, but it looked like a troll so I didn’t pay much attention:

We can use John The Ripper to crack the hash and then be sammy. For that I needed two files: /etc/passwd and /backup/shadow.backup (which is an incomplete backup of /etc/shadow as it doesn’t have the sudo hash). With that in mind, I first need to join both files together so that john can parse them. I ran the following in my local machine:

Where the contents of john_pwd.txt are:

Now that john can parse them it’s time to get cracking!

So we can log in trhough SSH with sammy:cooldude! and read user:

Being Sammy, I decided to run sudo -l and found something interesting: we can run wget as root!

The plan is the following: I’ll run wget as root to post some data (a file) to my own machine and then listen with netcat. The command is:

Output of command (in box)

Output of command (in my local machine)

We can see the differences with the backup, being the main one that we have the root hash. Now, we could repeat the same process and try to crack the hash to get to root (with shell access) or we could simply send us the contents of /root/root.txt:

And that’s how we got the hash!

I also checked the contents of /root/troll and /backup/agent22.backup (out of curiosity) and it turned out they were the same: