Although this machine was rated as easy with 20 points, I found it really challenging and learnt a great deal in some aspects, like DNS. It starts with us checking smb, getting some credentials and then having to do a zone transfer in order to find an admin panel, after which we come across an LFI which leads to RCE. Then, it’s just a matter of realising that there is a cronjob running a python script as root which imports the “"”os””” library, so we can poison it and hence get to root.

So many things, so let’s go one by one.

I connected anonymously to the samba shares and discovered some interesting credentials. For that, I used SMBMap, a useful tool which lets the user scan all shares, list them recursively and even download files:

I tried to use the credentials in FTP and SSH, but no luck. Therefore, I decided to move on to the webserver on port 80. 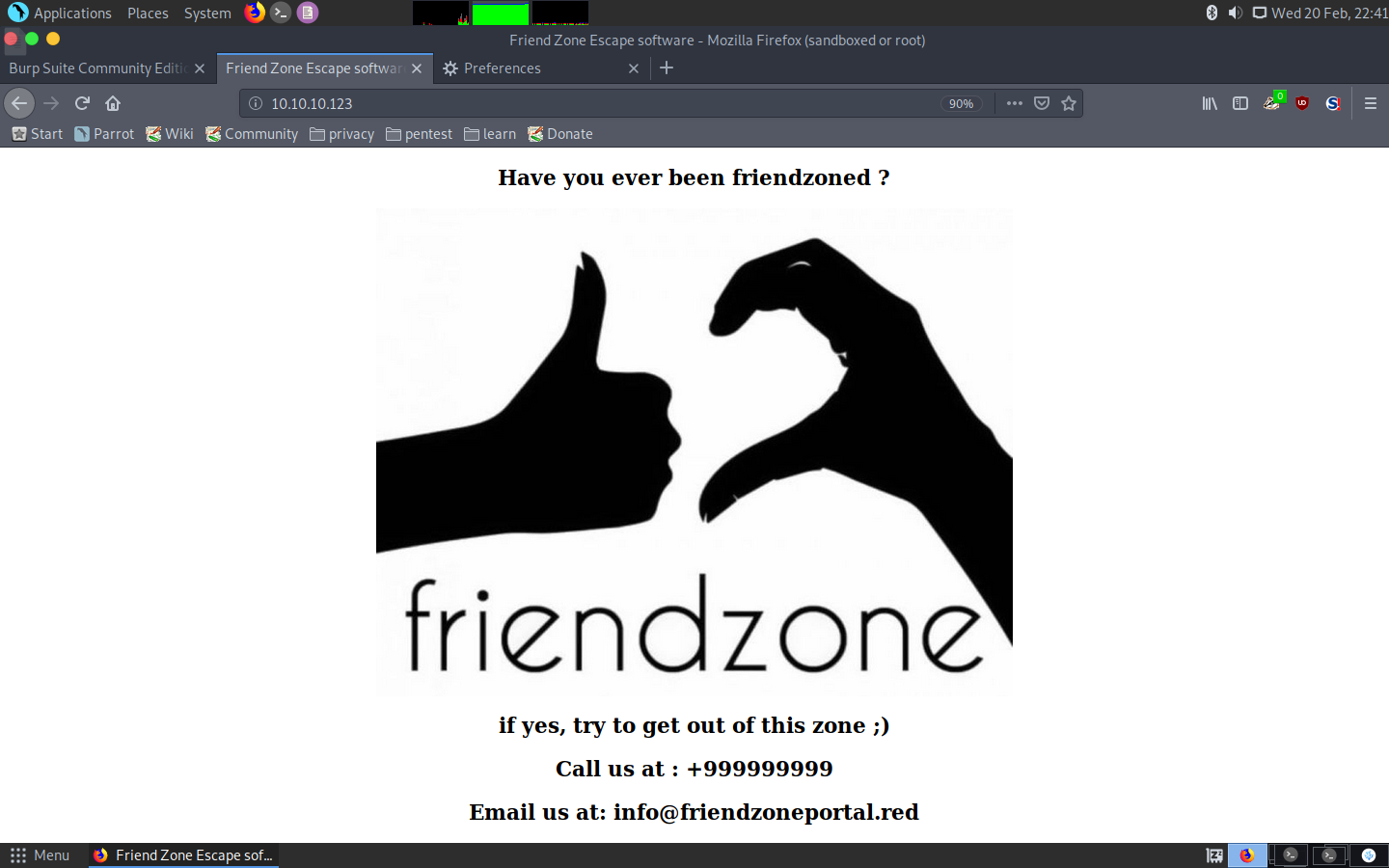 I tried to run dirbuster and came across what was a rabbit hole: a directory called wordpress that was empty. I tried to have a look at port 445, but nothing came up. It was time to enumerate port 53!

I was completely new to this so I was advised to watch Ippsec’s video of Bank (kudos to him). It indeed turned out to be useful, as the technique was the same: Zone Transfer. What this attack does is the following: the attacker acts as if it were a slave DNS server and asks the server for DNS entries, to which the compromised server complies. Hence, the attacker gets a bunch of useful information data.

The command I used was:

I used that domain because in the main page there was an email with domain friendzoneportal.red and, after trying with that and getting nothing I removed the portal substring.

We can see some interesting domains, amongst which there is one that contains administrator! I added all of them to my /etc/hosts file.

After adding all the entries, I visited https://administrator1.friendzone.red/. 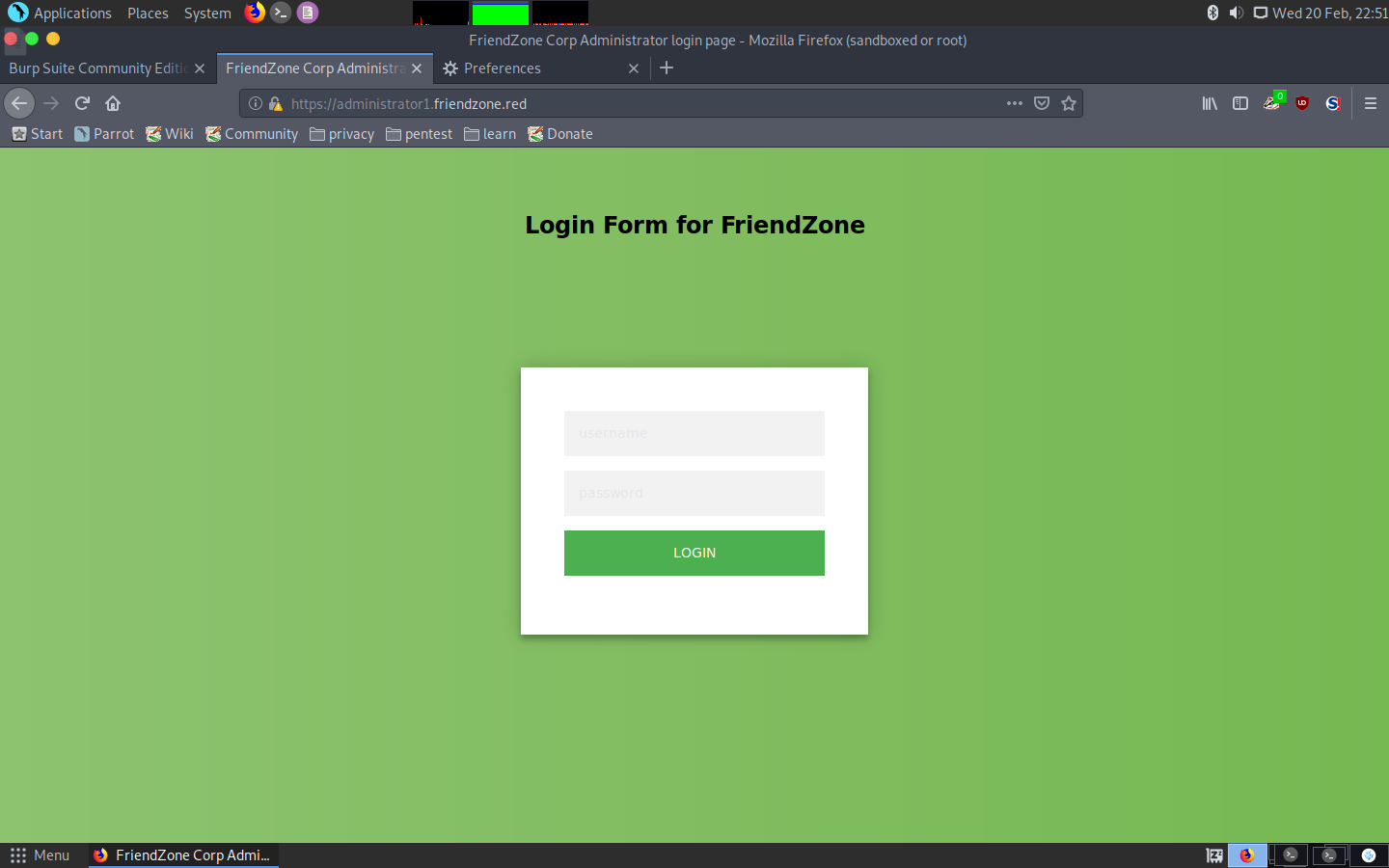 I entered the creds obtained through SMB: admin:WORKWORKHhallelujah@#. 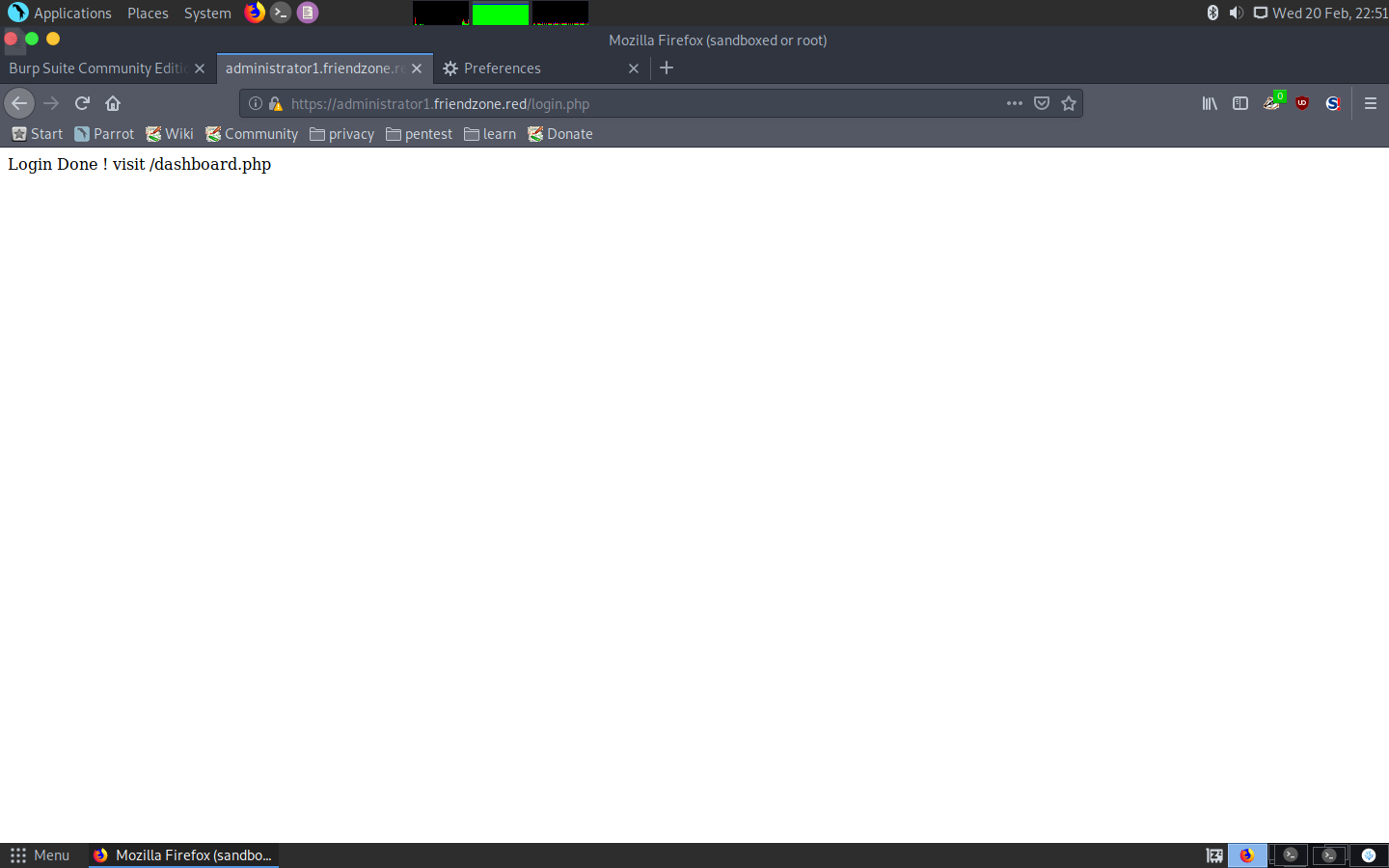 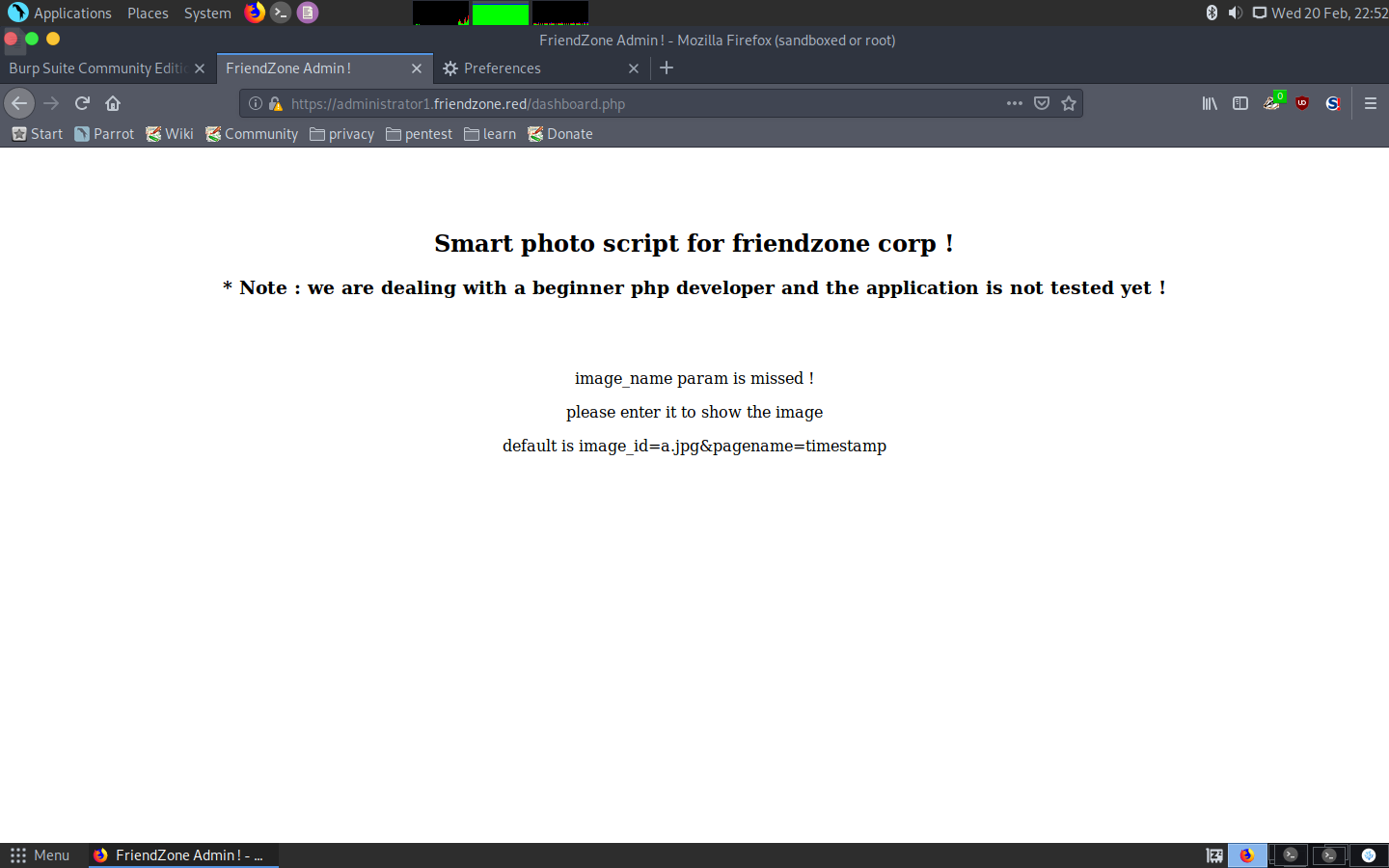 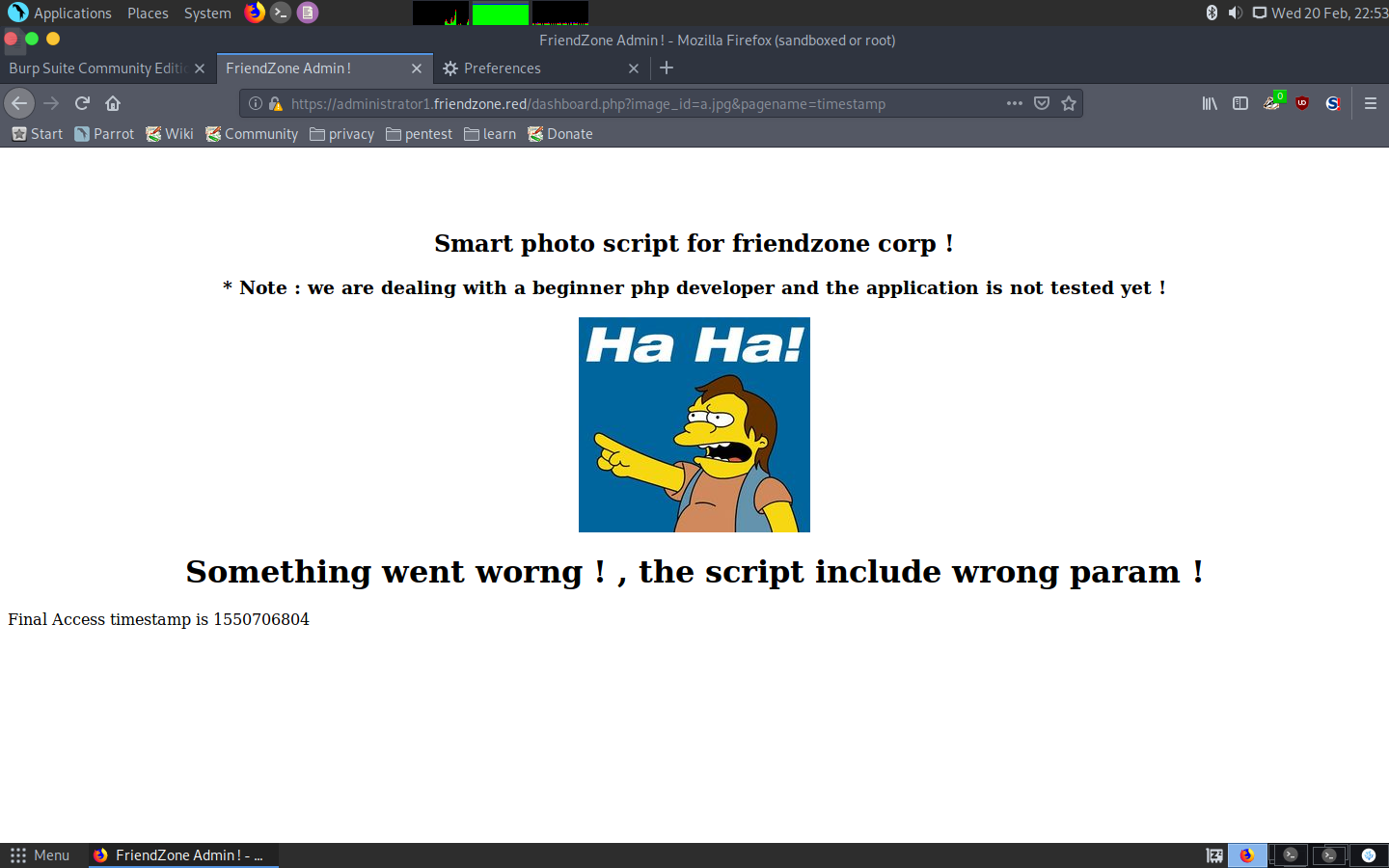 After some enumeration with dirbuster I dsicovered a PHP script called timestamp in that directory, so that gave me a clue of what was really happening: the pagename parameter includes a PHP script, in this case timestamp.php.

With that in mind, it’s easy to guess what to do: I just need to upload a PHP script to SMB (Development share) and then try to include it in the pagename parameter. Simple, isn’t it?

Well, it didn’t turn out to be that easy, as I couldn’t find the path of Development… After quite a lot of time, someone gave me a hint and told me to look at /etc/. And there is was! I made a simple PHP file called test.php and uploaded to Development. The contents of the file were:

Then I accessed it with /etc/Development/test as the pagename parameter. 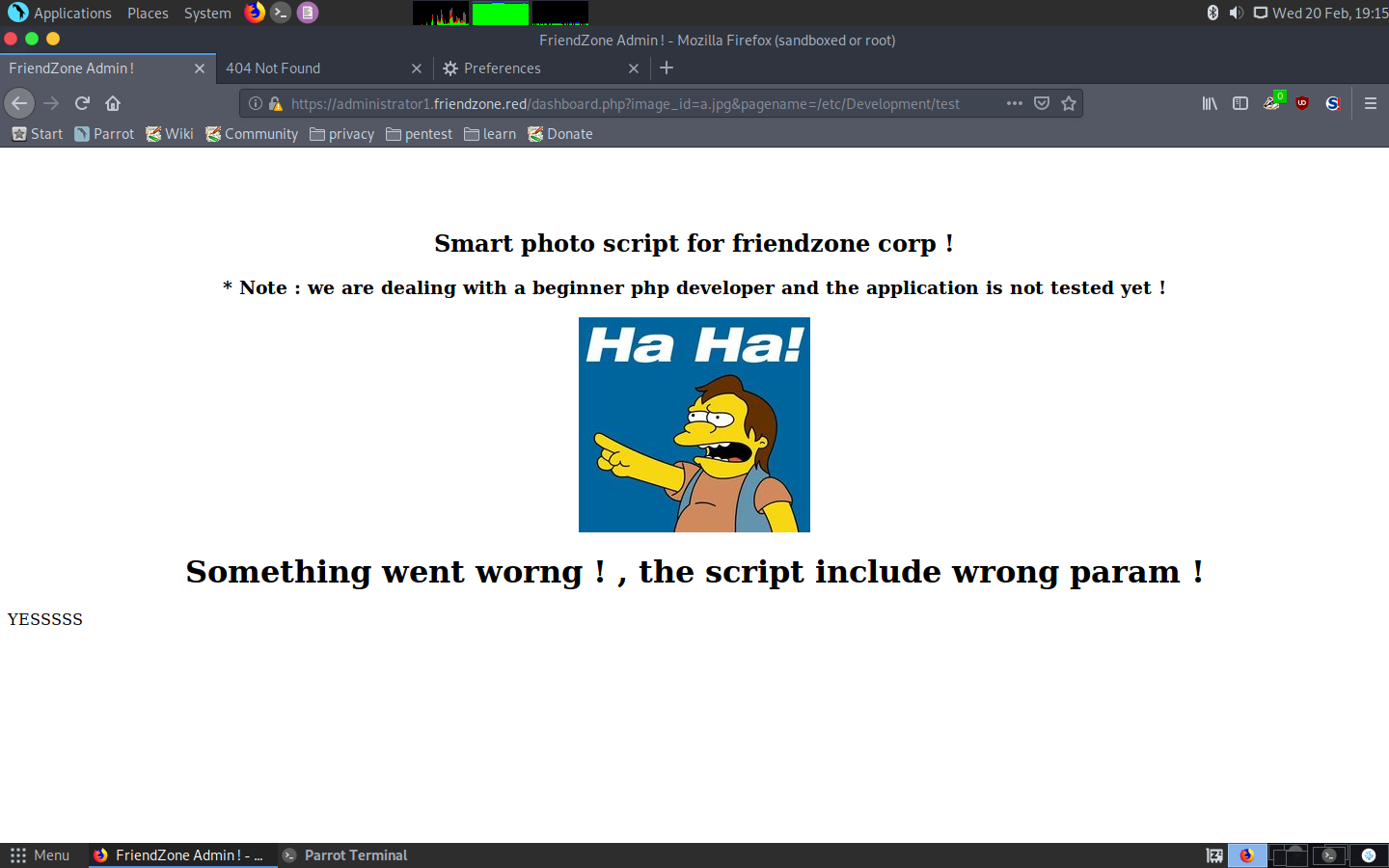 Okay, so now I just needed to upload a shell and listen with netcat!

I started to enumerate the system and came across two interesting facts:

I then used pspy, a tool to monitor processes without the need of root privileges and got the following cronjob:

Okay, so we have a python script that runs as root in a cronjob, and this script import os, which we can write. Seems obvious right? It’s only necessary to poison the library by modifying the source code of /usr/lib/python2.7/os.py.

I run the following command:

I waited and voilà! I could now access the root directory and read the flag: 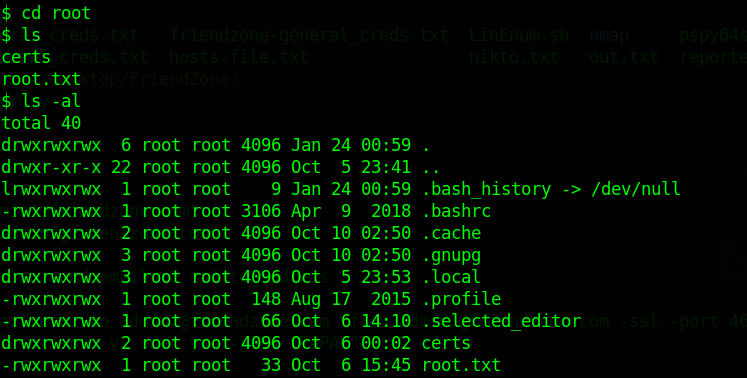 And finally we can do cat root.txt:

Definitely one of the most interesting and learning-wise machines I’ve ever rooted! I hope you learnt as well reading the write-up!