The challenge description is not really interesting, just a server to connect to and a python script: 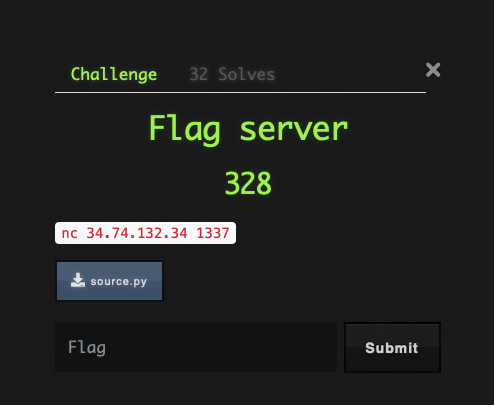 We can quickly see that the challenge will be about breaking AES, which, as mentioned in the documentation, uses ECB mode as the default mode if none were specified (our case).

[*] If you know how AES in ECB mode works, please feel free to move on to the next part, as here I’ll explain the basics of this method of encryption.

AES is an algorithm for block encryption that is comprised of different modes: ECB (Electronic Code Book), CBC (Cipher Block Chaining), CFB (Cipher FeedBack), OFB (Output FeedBack) and CTR (Counter). On this challenge we’ll be exploiting the simplest of all of them: ECB.

The way it works is by splitting the plaintext into chunks of 16 bytes, padding the last one if necessary so that they all have the same length. Once that is done, each chunk is separately encrypted with the same key, so that a ciphertext block is obtained. The image below illustrates the idea:

Knowing how AES in ECB mode works and the fact that we can leverage the padding in order to recover the flag, it is easy to construct such an attack. Here’s an example that explains the concept:

PoC in the server

This can be proved with the actual server, as we know the flag starts with CSACTF{. I will use Python’s pwntools in order to connect to the server and automate the whole process, as it’s rather tedious to do it by hand given that the input needs to be base64 encoded.

And the output we get is the expected, the ciphers are the same:

Once we know this works we just need to automate the process of checking through all possible characters. It is also necessary to check a different block of the ciphertext, as the previous method would only work with the first 7 characters of the flag. I decided to check the fourth block (bytes 96 to 128) in case the flag was lengthy.

The full Python solution is below:

It takes a while to get the whole flag but in the end we get it! (I don’t know why but the final closing bracket wasn’t found)

I hope you learned on this write-up! Ask me any questions if necessary!

Forensics 1. Modern Picasso Challenge description: Here’s a rendition of some modern digital abstract art. Is it more than art though? We get the following GIF to work with: Picasso.gif And w...