Most people say this machine was close to real world pentesting. IMO it was really cool as for the first part it shows a “common” misconfiguration with Group Policy Preferences keys which lead to user, while the second one was based on taking advantage of a kerberos vulnerability that lets anyone get the hash of the domain admin and, after cracking it, impersonate him.

Firstly, I enumerate open ports to discover the services running in the machine. I ran the following:

Looks like we have SMB running on port 445, so let’s check it! We can run smbclient to see the shares available to us.

Replication was one of the two directories that could be accessed anonymously, so I started looking at things and eventually came across an interesting path: replication/active.htb/Policies/{31B2F340-016D-11D2-945F-00C04FB984F9}/MACHINE/Preferences/Groups/Groups.xml.

The encrypted password we’ve just found are there due to Group Policy Preferences (GPP), which are a tool designed to set local accounts with embedded passwords so that there is no need to store the passwords plaintext in scripts. The flaw is that it is vulnerable, as it stores the password publicly to any anonymous user logged in SMB and Microsoft releases the key used to encrypt the password.

We can just install a tool called gpp-decrypt with the following command:

Mounting the directory and accessing SVC_TGS/user.txt 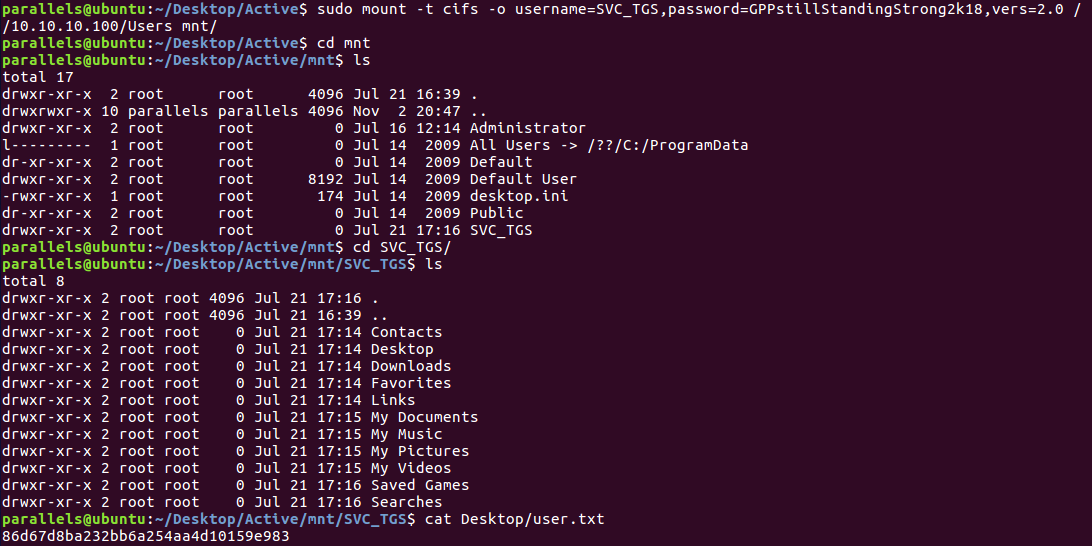 I started looking around in the new directories I had access to but couldn’t find anything useful. I was really frustrated and didn’t know what else to do so I asked for advise and someone told me to have a look at other services that nmap had found, especially kerberos. So down I got to research about kerberos vulnerabilities and finally came across something interesting.

Apparently, kerberos is a piece of software that is used to authenticate users that want to run a service. It does so by generating a key, called ticket, and then exchanging it with the client. However, there is a vulnerability called kerberoasting which is based on requesting the ticket and then decrypting it offline to log in legitimately later to the service. Besides, I found a tool called Impacket written in python that can do this for us and get us the encrypted ticket.

I downloaded it and run the following:

Once we have the hash we just need to decrypt it! I used John The Ripper although hashcat is also ok.

Cracking the key with JtR

We have our Administrator password! Now let’s mount the shares again with admin credentials: Administrator:Ticketmaster1968.

Getting a root shell

However, I always like to get a nice shell, so even with the hash the box wasn’t completed!

To get the shell I used another example from Impacket repo, this one called psexec.py (you can find the format of the parameters by doing psexec.py –help).

And with NT authority we’re like root, so our job here is done!

Hack The Box: Heist machine write-up This is a windows box thoroughly based on enumeration, it starts with a guest access that leaks some credentials followed by smb users enumeration that provide...