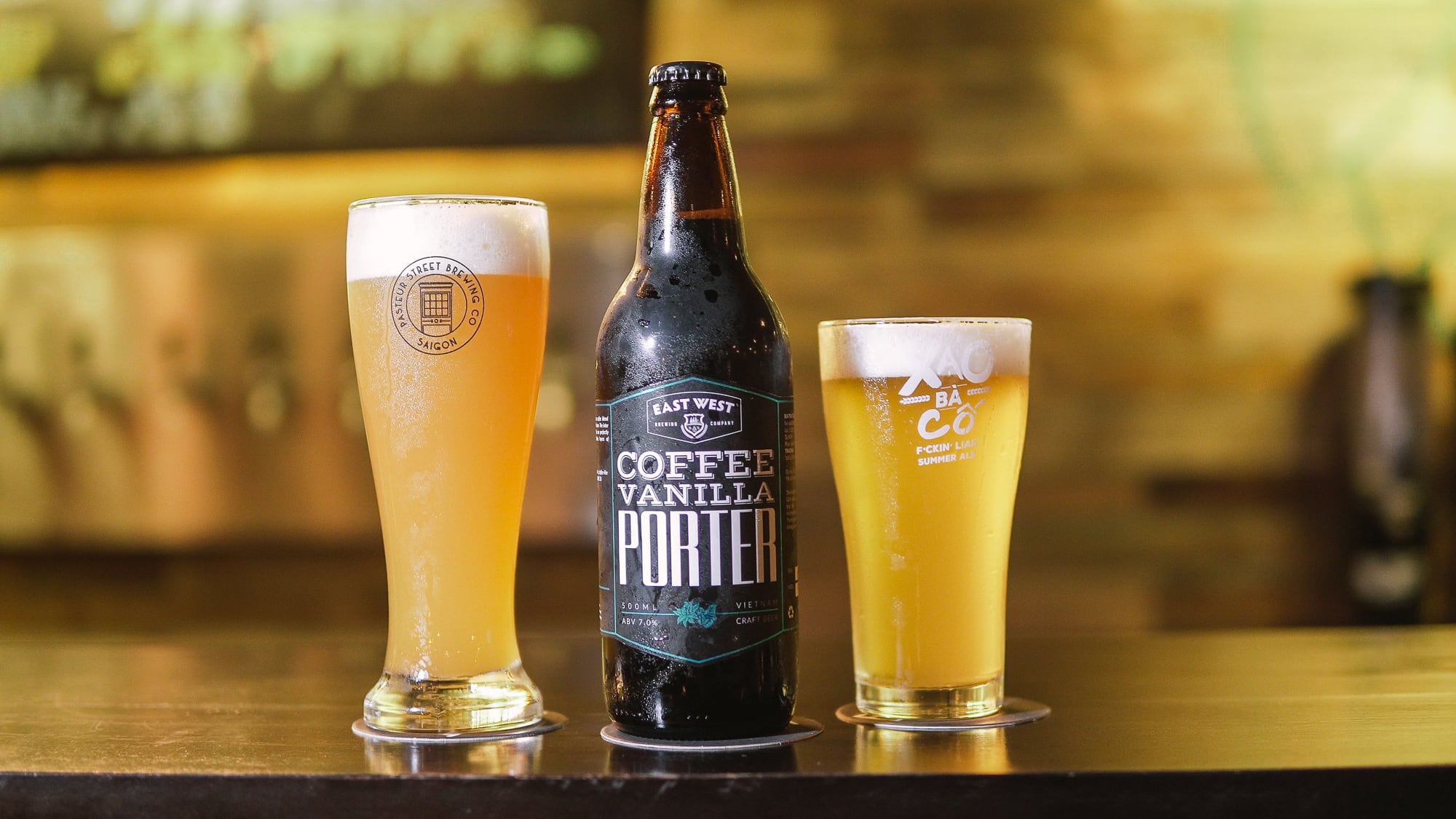 Craft is a medium-rated machine which I found really realistic in the sense that we enumerate an initial webpage to find two domains, one has a gogs instance (gogs is, according to their website, a “painless self-hosted git service”) while the other is a API in development. From there we can exploit some flaws to get to a docker instance which contains a database with some credentials that can be used to get into the machine through SSH. Then, we find an uncommon file and come up against a “vault” service, which stores passwords, credentials, certificates (all the juicy stuff). From there we can SSH using that service as root using a one time password (OTP).

Besides, it’s also based on Sillicon Valley, which makes it way more cooler!

Okay so not too much, just SSH and a web server over HTTPS. We’ll look at the second one for now.

Upon visiting the webpage I find that there is an API in development and by checking the two links on the top right corner I get two domains: gogs.craft.htb and api.craft.htb. 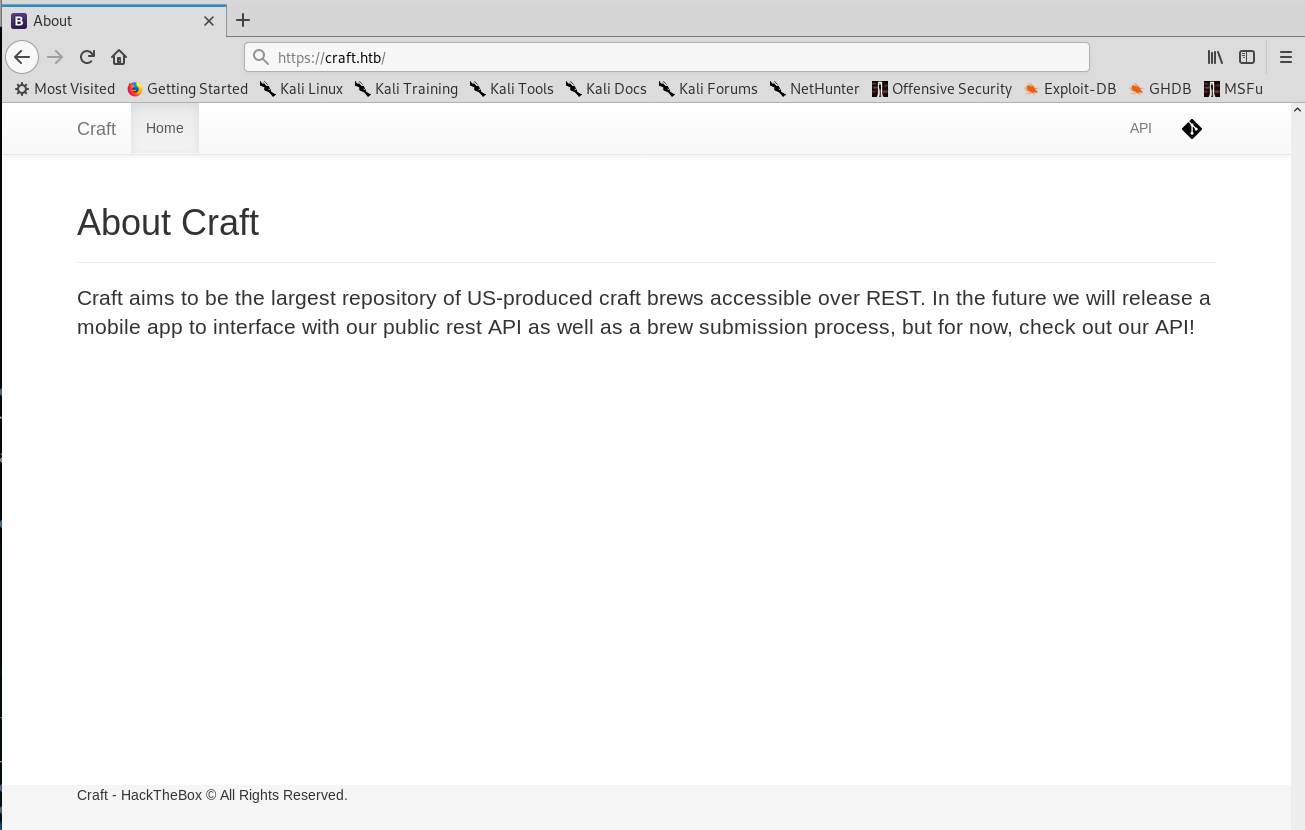 My /etc/hosts file has therefore these lines among others:

We can see that the box is using Swagger UI, which is a tool to visualize and interact with the API’s barebones. 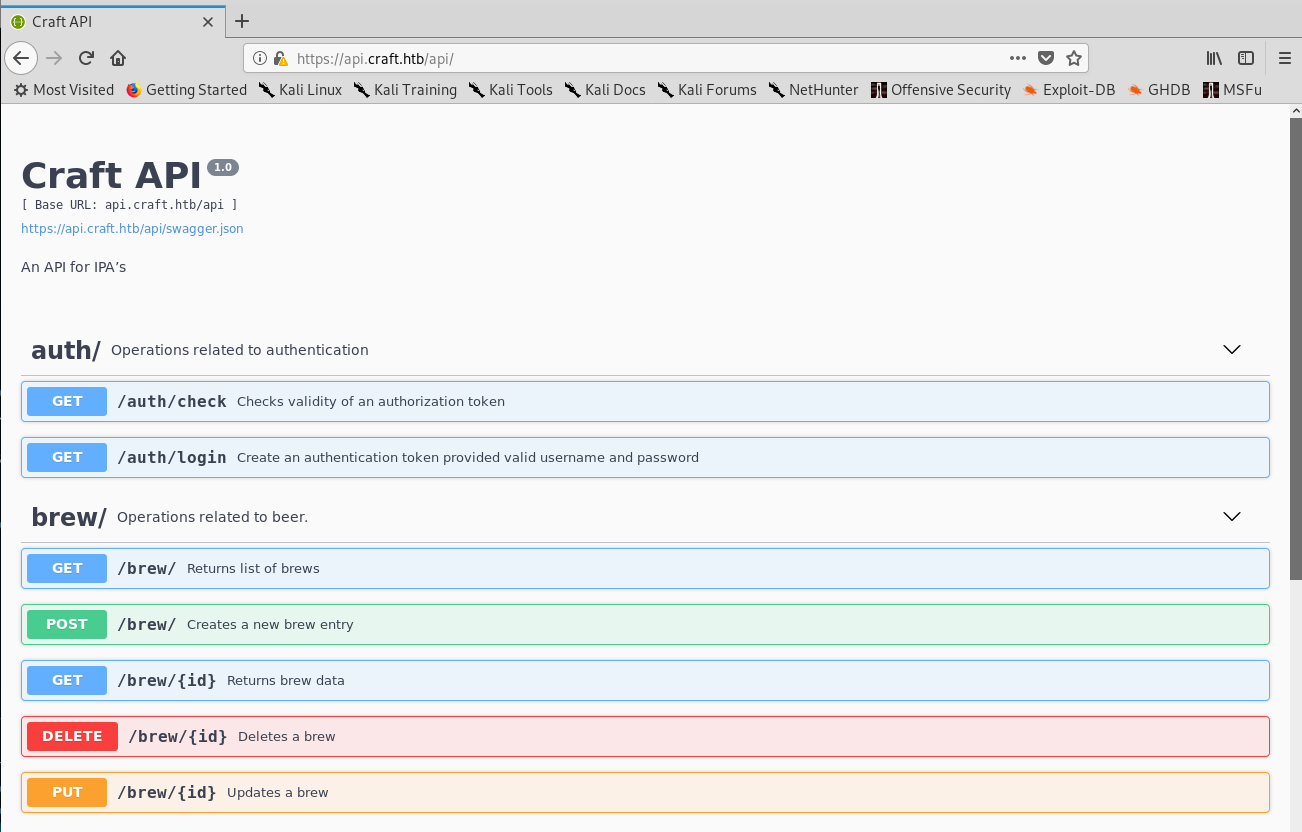 I played a bit with it to come up with the following:

I decided to move on to gogs.craft.htb, as there wasn’t anything too interesting, I just learned the main functionality of the API. 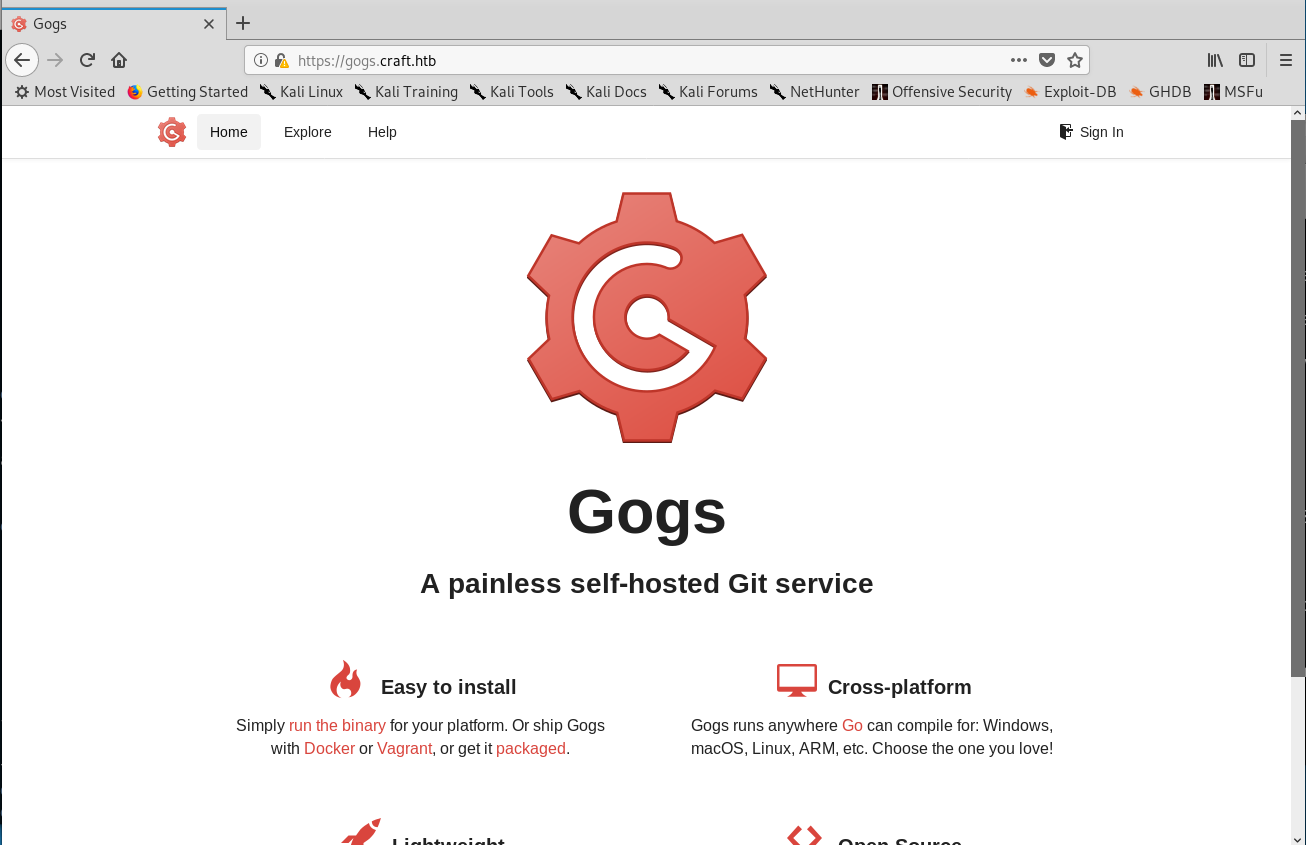 I went to the explore tab to find that there was one repository that contained the source code of the API: 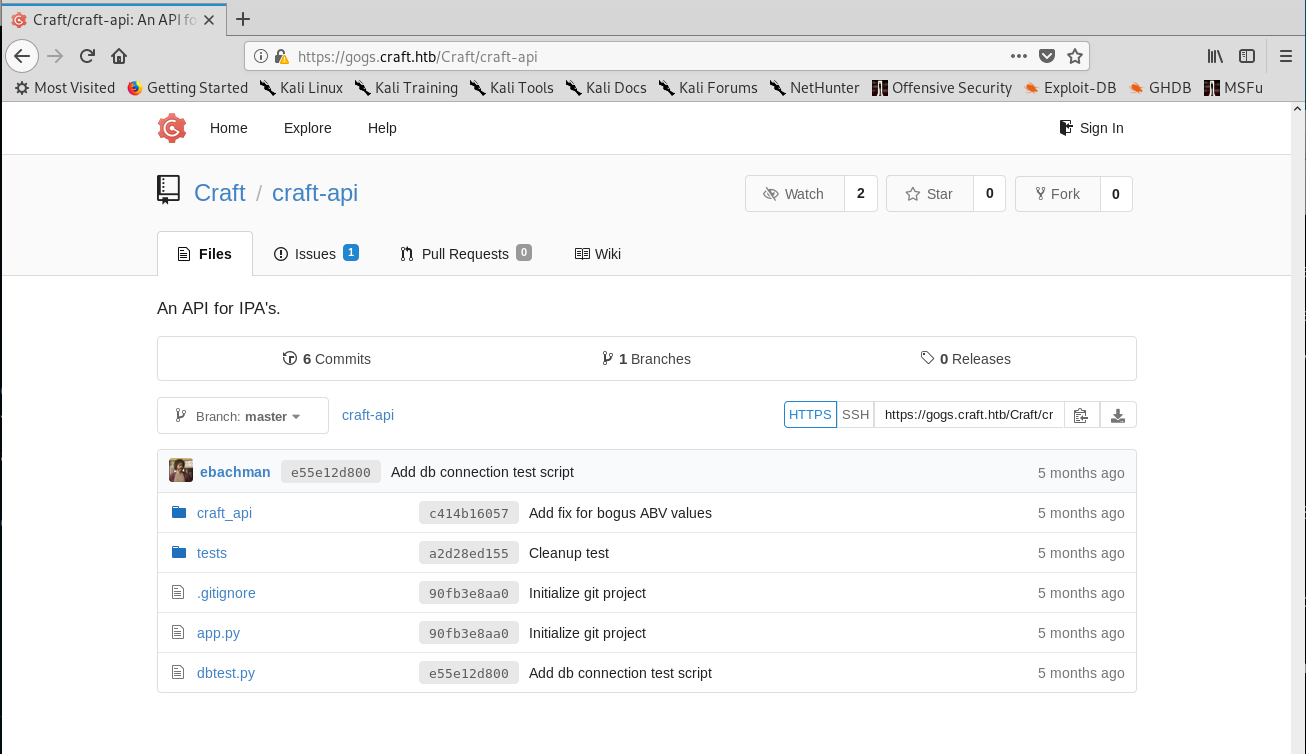 I noticed that there were 6 commits and 2 issues (one already solved) on the repo, so I started going through them before actually checking the code. Another important detail was that there are three users: denish, erlich and gilfoyle.

I found some credentials for dinesh on one of the commits:

Found credentials on a commit 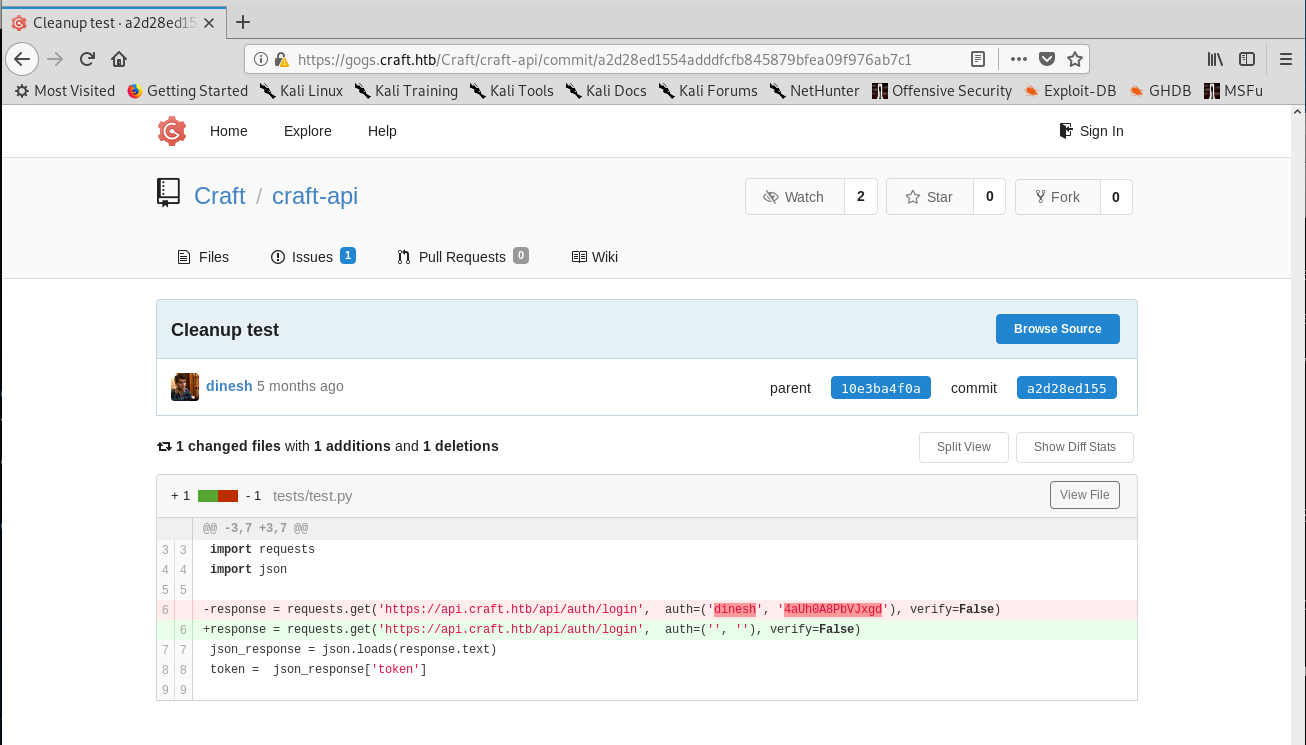 There was as well a fix for an issue with the ABV validation. Well, a fix. It used Python’s eval() function, which is dangerous. 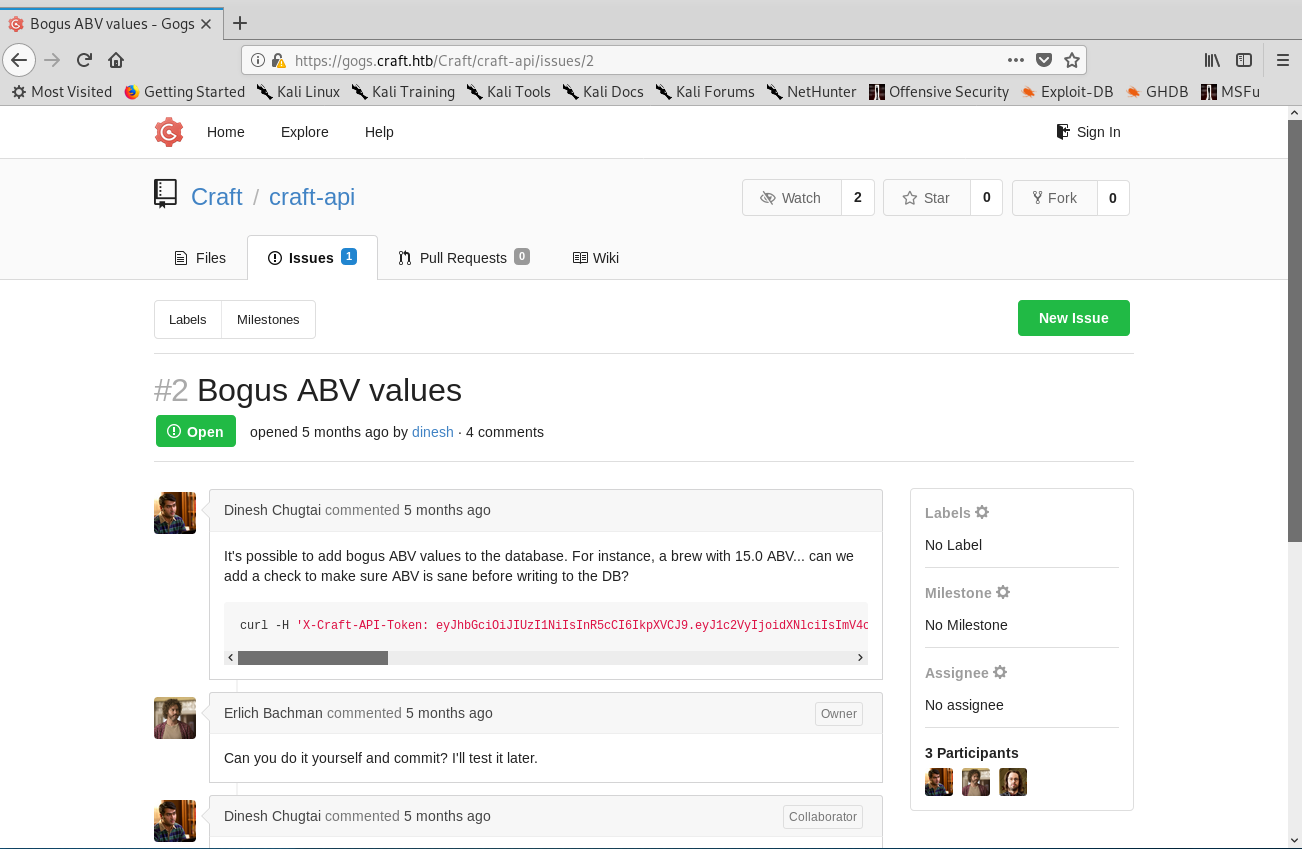 Then, inspecting the code I noticed that there were some credentials and secrets for the database connection inside settings.py. However, that file wasn’t on the repository as confirmed by the content of .gitignore.

Importing data from settings.py for the db connection 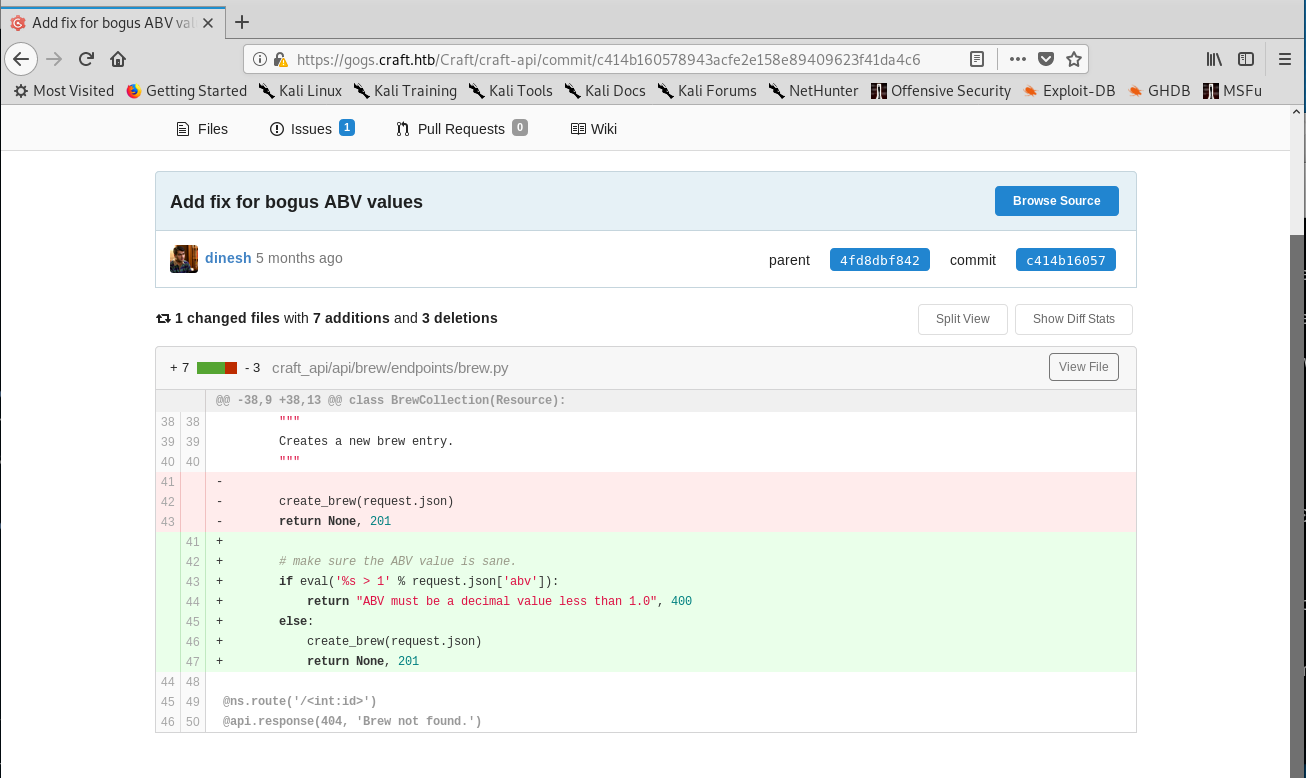 As the vulnerable code which executed eval needed authentication I came up with the following strategy:

I had trouble getting a shell that worked but I finally found this one:

To automate all the boring process I wrote a quick bash script to do everything for me, I just needed to run the script and set up a netcat listener to get the connection:

Here is the bash script I wrote (I’m sure the token extraction part can be improved):

Getting out of docker

I thought I was inside the system but there was something weird going on: there was no user under /home, I was root and there was a .dockerenv file on /. I was inside a docker container!

First things first, I remembered that the API had that settings.py file which wasn’t on the gogs repo but should be on the container. So I navigated to /opt/app/craft_api/ and was able to read it: 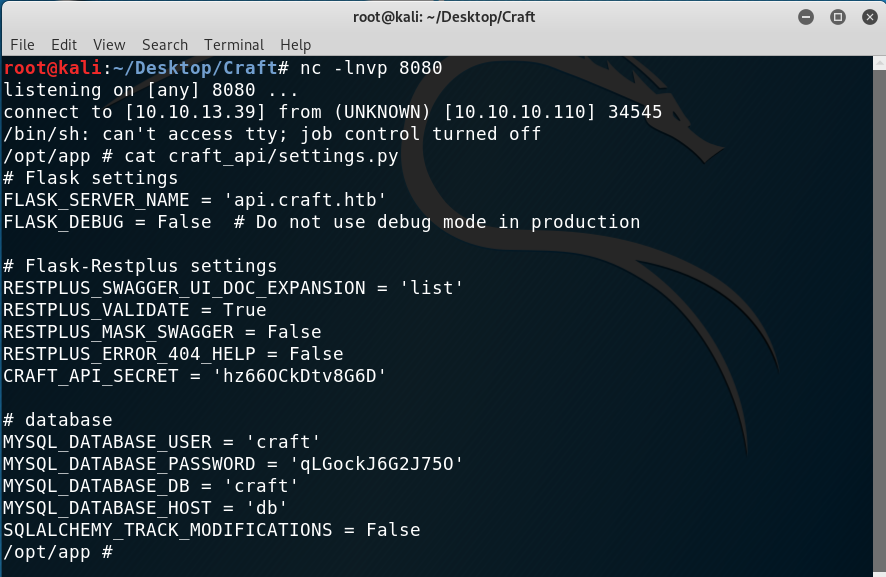 I tried to use the credentials to log in as the users through SSH and also in gogs but no luck. Then, the database came to my mind.

There was a dbtest.py file under /opt/app so after modifying it the database could be queried!

The changes made were:

This was because the first method only gets the first row returned from the query whereas the last one returns all of them, which is what we need.

Then, the script turned out to be like this:

With the script I found a table called users which returned the passwords of all the users on the system!

Extracting information from the database

With those credentials I thought I would be able to log in as one user using SSH and that would be the user but it turned out I was wrong. After trying all combinations I remembered the gogs service, maybe there was something else on one of the other accounts.

I managed to log in as gilfoyle and success! There was a private repo which contained SSH private keys!

Finding the private repo and getting the SSH keys 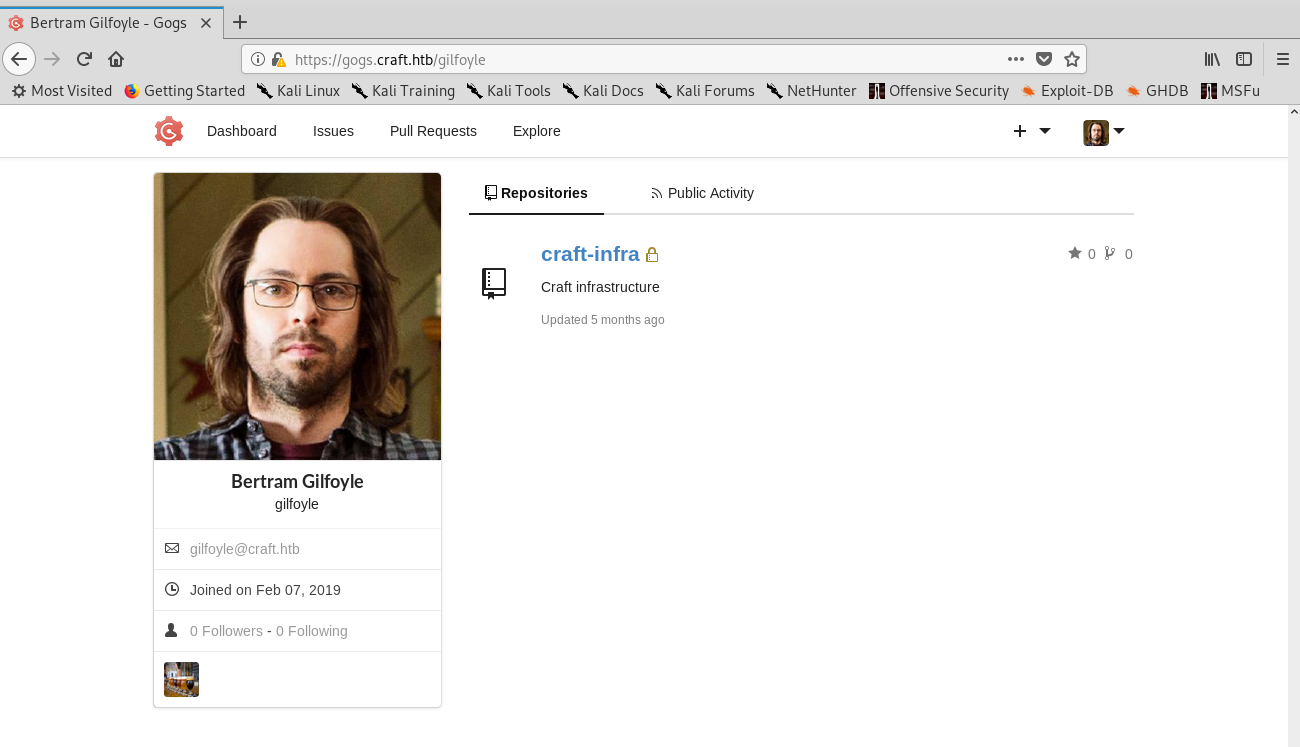 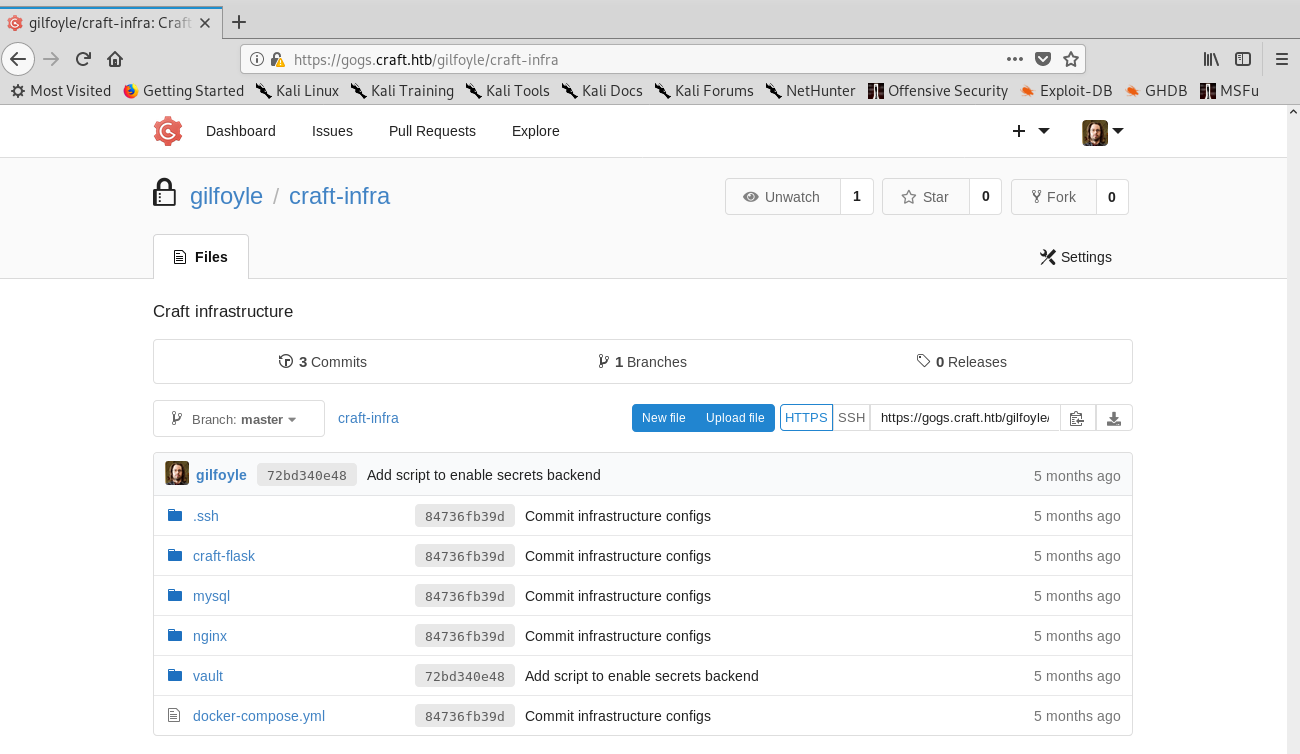 Now I could log in as gilfoyle to the box using the key. But wait, I still got asked for a password! I googled it and found that it was common practice to use SSH keys alongside passphrases. Well, I already had the pass from the database, so I tried it and was in! 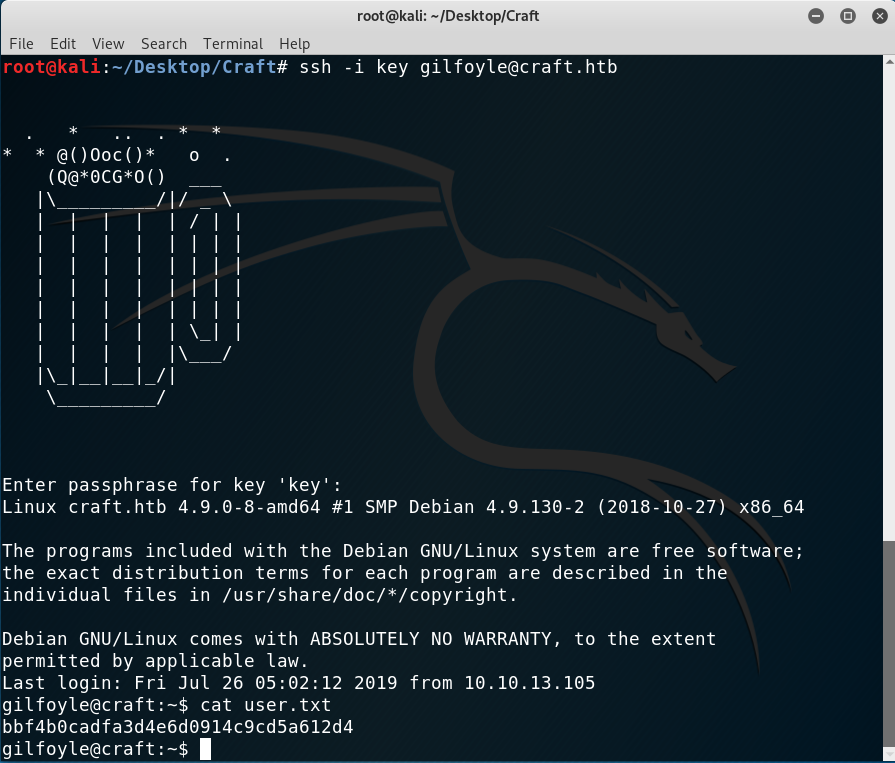 After reading the flag I noticed a weird file on gilfoyle’s directory: .vault-token. A google search revealed that it was part of vault, which is a service that stores data safely as secrets on a machine. The privilege escalation had to be based on it!

I started poking at the documentation and things and eventually found that tokens can be dynamically generated for user authentication into a system. I found that there was an option to log in as a user via one time password (OTP): https://learn.hashicorp.com/vault/secrets-management/sm-ssh-otp

I listed the roles with vault list ssh/roles and obtained one result: root_otp. Good, OTP with root!

I tried with vault ssh root@localhost and, as it was my first attempt I didn’t even need to specify the role and mode, I just copied the OTP and was in! 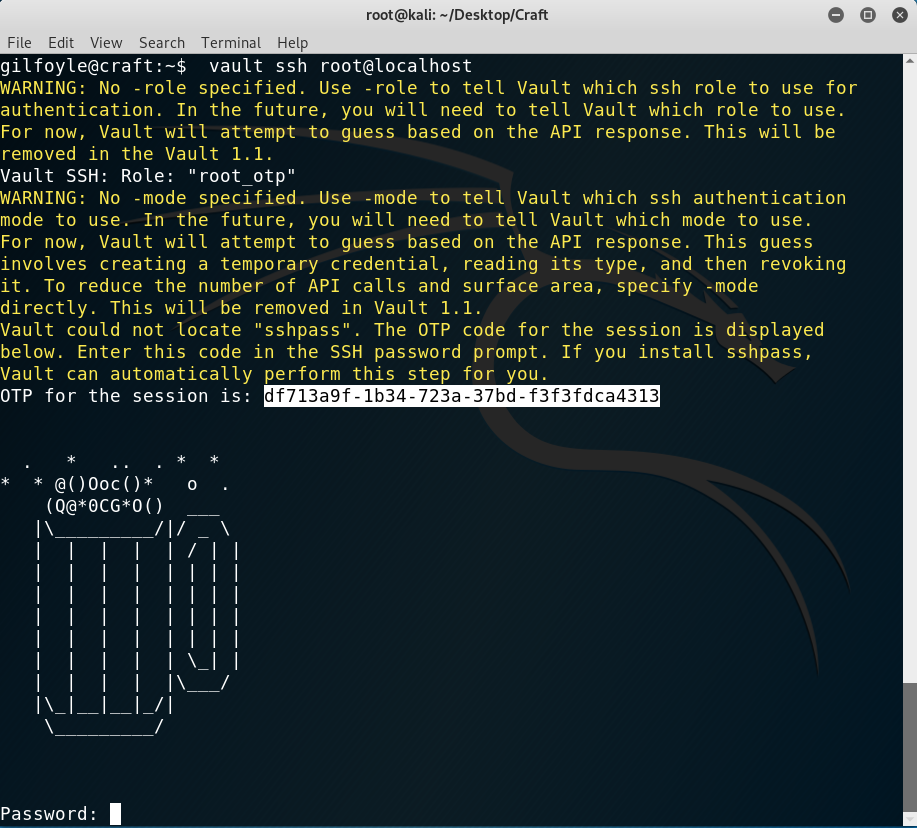 I hope you enjoyed the machine! It was really fun, kudos to the author. If you liked the writeup you can give me respect on Hack The Box through the following link: https://www.hackthebox.eu/home/users/profile/31531.