This post focuses on AWS subdomain takeovers and is the second part of my first post, https://godiego.tech/posts/STO-Azure/. While doing continuous recon I’ve come across some interesting domains that were vulnerable which have forced me to learn quite a bit about AWS and their different services. One interesting fact is that I felt that making a PoC for these services was harder than for those from Azure. Still, I think it is a nice learning exercise so I invite you to explore the AWS dashboard and try to make it work by yourself before reading how I did it.

The services I’ll go over were the ones I’ve come across so far. I must say that not all services are vulnerable, I just added the extra section to keep note of the behaviour and help people not waste their time. Additionally, in this post I not only detail how to make a simple PoC but also how to make a good PoC.

AWS Elastic Beanstalk is an easy-to-use service for deploying and scaling web applications and services developed with different languages on familiar servers such as Apache, Nginx, Passenger, and IIS. You can simply upload your code and Elastic Beanstalk automatically handles the deployment, from capacity provisioning, load balancing, auto-scaling to application health monitoring. At the same time, you retain full control over the AWS resources powering your application and can access the underlying resources at any time.

Quite cool, we just write the code and don’t need to worry about deploying or anything, it handles automatically spinning up the EC2 instances as processes and setting up listeners on ports that map to those processes, hence serving the content. One cool aspect that I learnt about it when making PoCs is that it’s also possible to have different app versions and these can be swapped in no time, so we can start with a simple PoC and if the newer one has some kind of error just revert it back to the working one.

Identifying vulnerable Elastic Beanstalk domains is quite easy, we only need to check that we get a NXDOMAIN response to our query and that the pointed domain has the form <name>.<aws-region>.elasticbeanstalk.com.

I once found two domains from a company that were pointing to the same (vulnerable) Elastic Beanstalk environment. Great, I thought, two for one!

Now, to do the takeover I went over to the Amazon AWS console at the right region and started the environment creation process. There are two type of environments, we want to select the web server one.

The key step to determine if the domain is vulnerable is if we are allowed to use the dangling DNS domain for our environment. If it is, bingo! The environment name is not relevant at all, so just add a dummy name.

After that we are asked to select the platform stack. I selected Python because I’m more confortable with it and then uploaded my source code zip (I explain how to create this later on). It is also possible to use a public s3 bucket.

If everything goes well and there are no kind of errors in the uploaded source code, the application’s health will be an Ok.

Then we can check the DNS records with dig and can see that they are now pointing to an EC2 instance ip.

I had no idea how to get anything running, since the dashboard required a ZIP file so I went over to the documentation page and got a sample from https://docs.aws.amazon.com/elasticbeanstalk/latest/dg/tutorials.html, then tweaked it a bit to return a blank page unless we hit a specific path.

After that, I compressed it back again and uploaded it. In my case, the domain is showing no content under any path apart from the one I want to: /U1RPIGJ5IEdvRGllZ28K (STO by GoDiego in base64).

However, there is one issue with this: the PoC only working for http connections. Keeping in mind that nowadays most websites enforce the use of HTTPS, we should ideally make our PoC work with it too. It is important to note that it may be enough for a program to accept the subdomain takeover if the PoC is just on port 80, as we could argue that we don’t want to disrupt the service and that it’s better to not return anything than a blank page. However, I would advise to make it work anyways, it makes everything go faster and smoothly, nobody likes to get a More info needed on their report.

PoC not working for HTTPS connections

As I explained earlier on in the section, Elastic Beanstalk uses listeners that map ports to processes. In our PoC so far we’ve only added one listener on port 80 that maps to the default process (the web server) via HTTP. Hence, to make HTTPS work we will need to create another listener and another process. To do so we’ll edit the environment configuration:

We’ll need to add a load balancer listener on port 443 with an SSL certificate for it to work. Creating a self-signed SSL certificate is the easiest and quickest option. Once that is done we’ll select it and create the listener.

Creating the HTTPS listener on port 443

Finally, we’ll add the process and see how the PoC now works for HTTPS:

Working PoC for both HTTP and HTTPS

One interesting thing I learned while figuring out how to get things working was that, as Elastic Beanstalk is based on top of EC2 instances, we can directly SSH into those instances.

To do this eb is required. We’ll run eb init to select the region and the application. 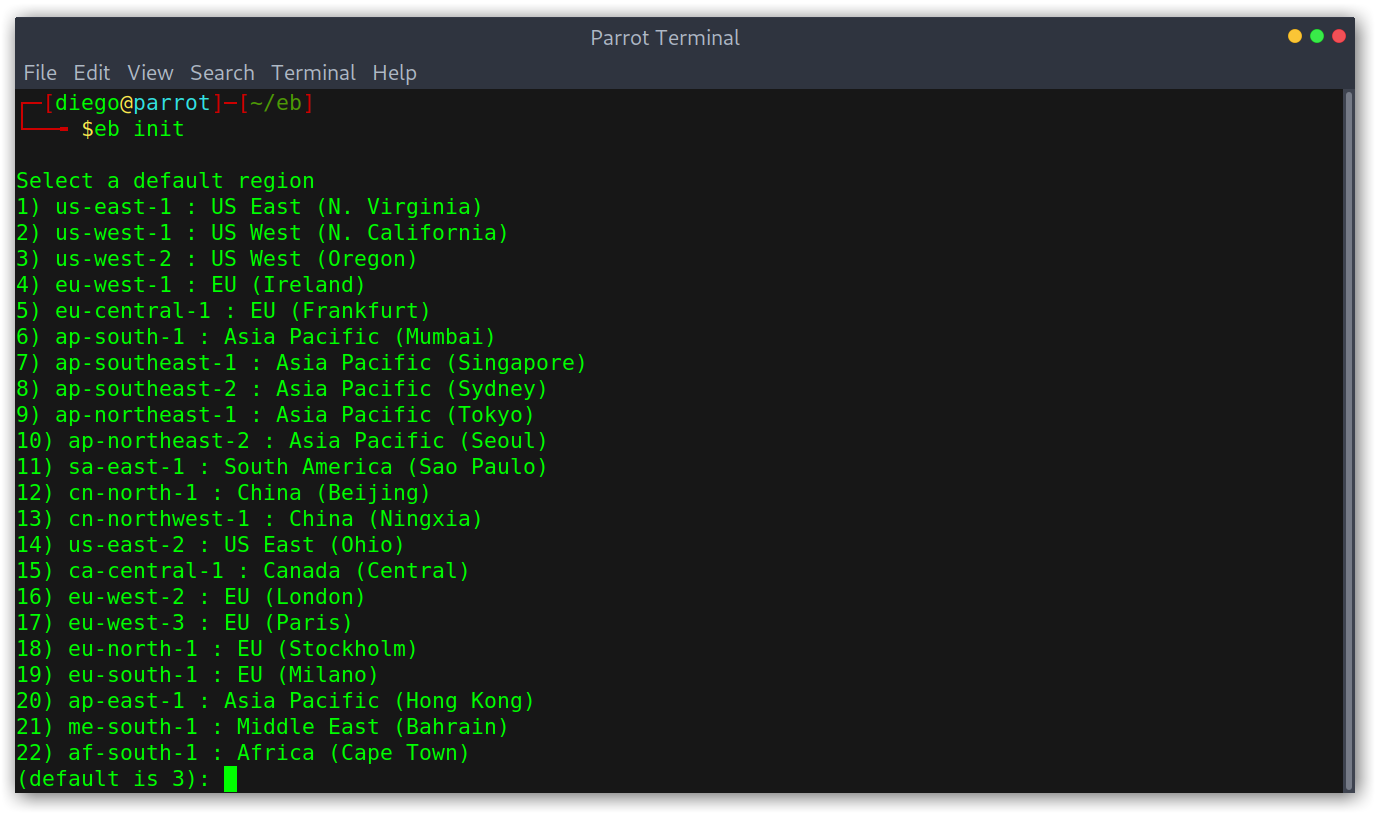 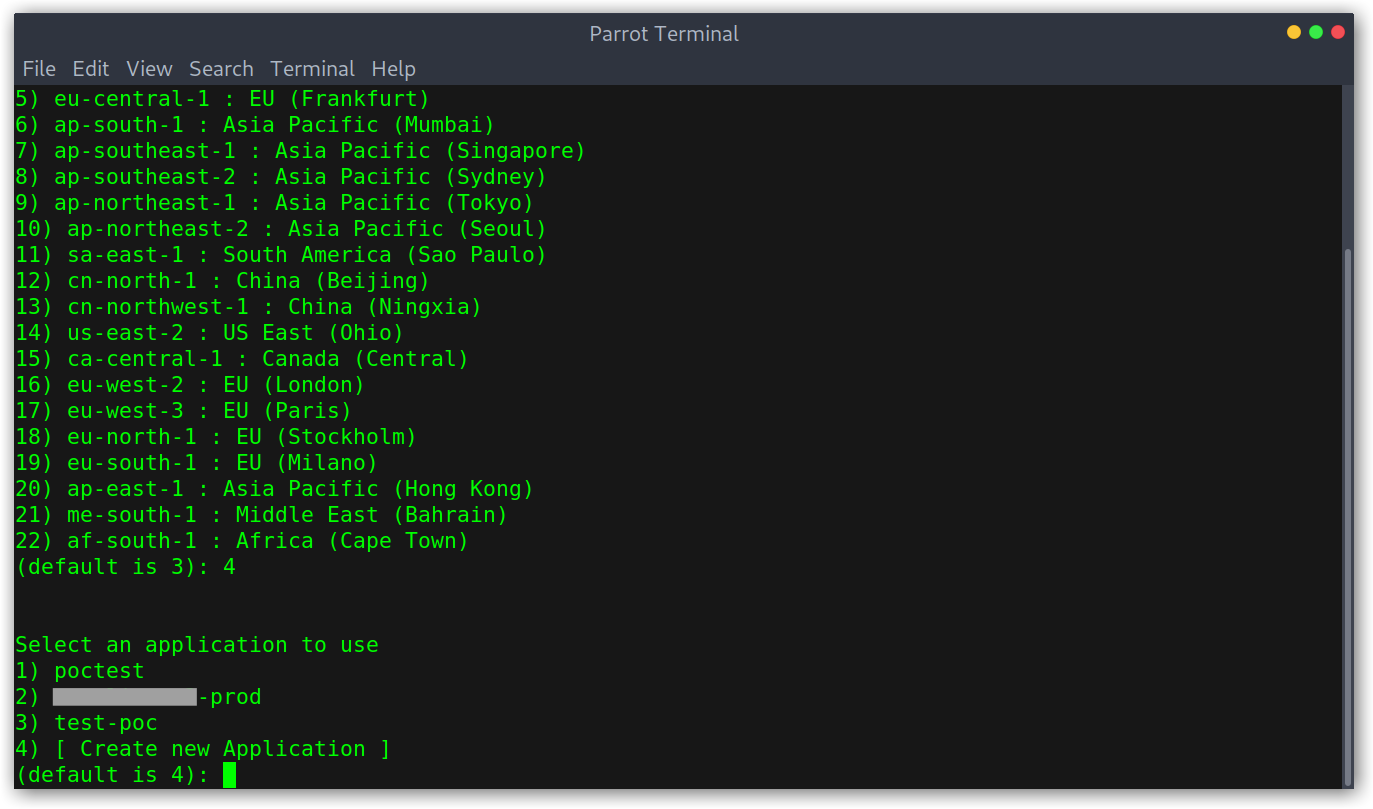 Then, eb ssh --setup will enable SSH for the selected environment. Note that this will destroy all existing instances and create new ones. This shouldn’t be a problem though, since it will deploy again the source code we supplied when we created the application.

We’ll be asked for an SSH key pair, I already had one but we have the option to create them via the cli. Another option is to add them via the EC2 dashboard.

Setting up SSH for the environment 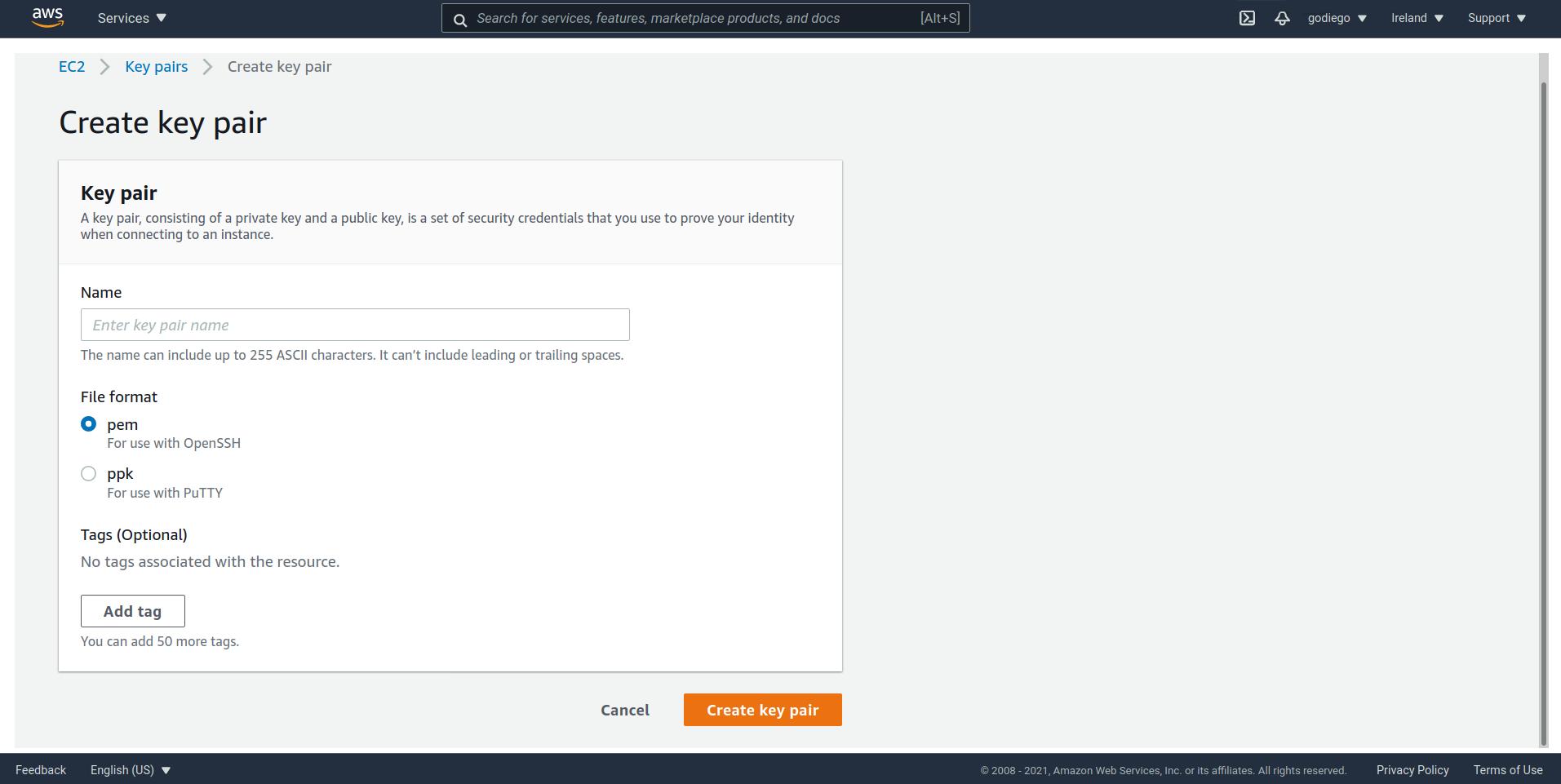 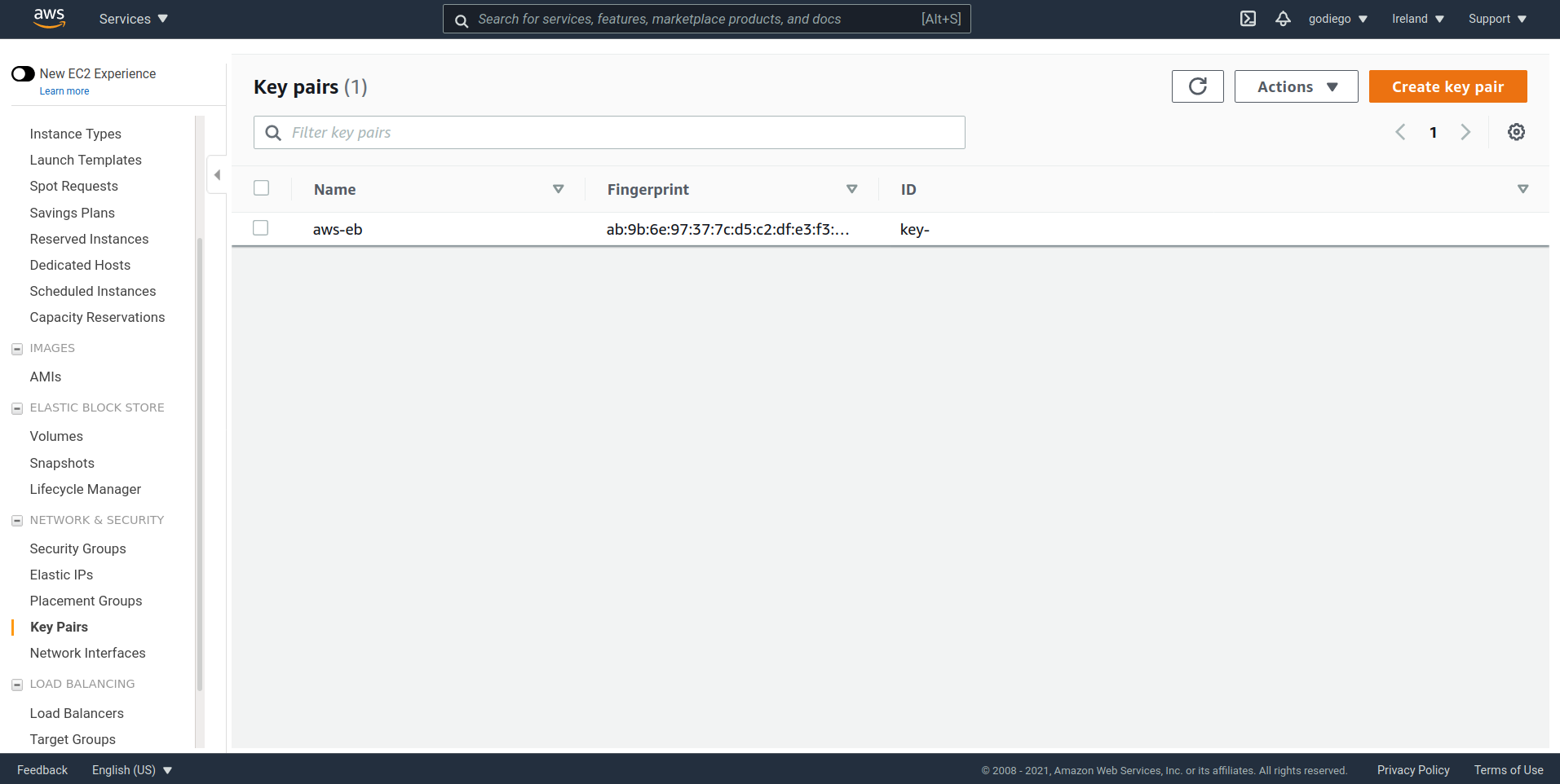 Then we can SSH into the instance and can explore the filesystem and locate the source code we deployed. When I learned about this I remember that at one point I added a listener on a random port and ran a python -m SimpleHTTPServer <port> to make a very very quick PoC.

Accessing the EC2 instance via SSH

AWS Elastic Load Balancer and Others

I added AWS Elastic Load Balancer as an example of takeovers that cannot be done in AWS due to some protections that Amazon has put in place but it’s not the only one, many of their services have this mechanism like Amazon API Gateway. Domains usually have this form:

As you’ll have noticed, a random string / number is appended to the name given to the service instance. This happens every time, so if I were to register poc-test-aws-api-gateway twice I would get different domains, which makes taking over dangling domains almost impossible.

This is everything! I hope you learned something useful, I tried to include all the little details that made me spend a lot of time trying to figure out how things worked. Hopefully, this article will grow with time and I’ll add new PoCs so stay tuned!

As a bug bounty hunter, one of the vulnerabilities that are learned at the beginning of the road is a subdomain takeover. While the concept of it is simple, just register some domain that hasn’t be...

Hack The Box: Bucket write-up Bucket was a medium box which, as you might deduce from the name, had some AWS S3 (and DynamoDB) stuff. It starts off with a publicly writable bucket which we can use...