Bucket was a medium box which, as you might deduce from the name, had some AWS S3 (and DynamoDB) stuff. It starts off with a publicly writable bucket which we can use to get a foothold into the box via uploading a simple PHP script with a reverse shell. Once in the box we see that the user has a project in development running locally as root, which we can use to read arbitrary files through the PDF generation feature.

I start by enumerating open ports to discover the services running in the machine. I’ll first add bucket.htb to my /etc/hosts file, then fire up nmap:

Not too much, just SSH and HTTP on the standard ports.

We can see that there is some sort of advertising platform. 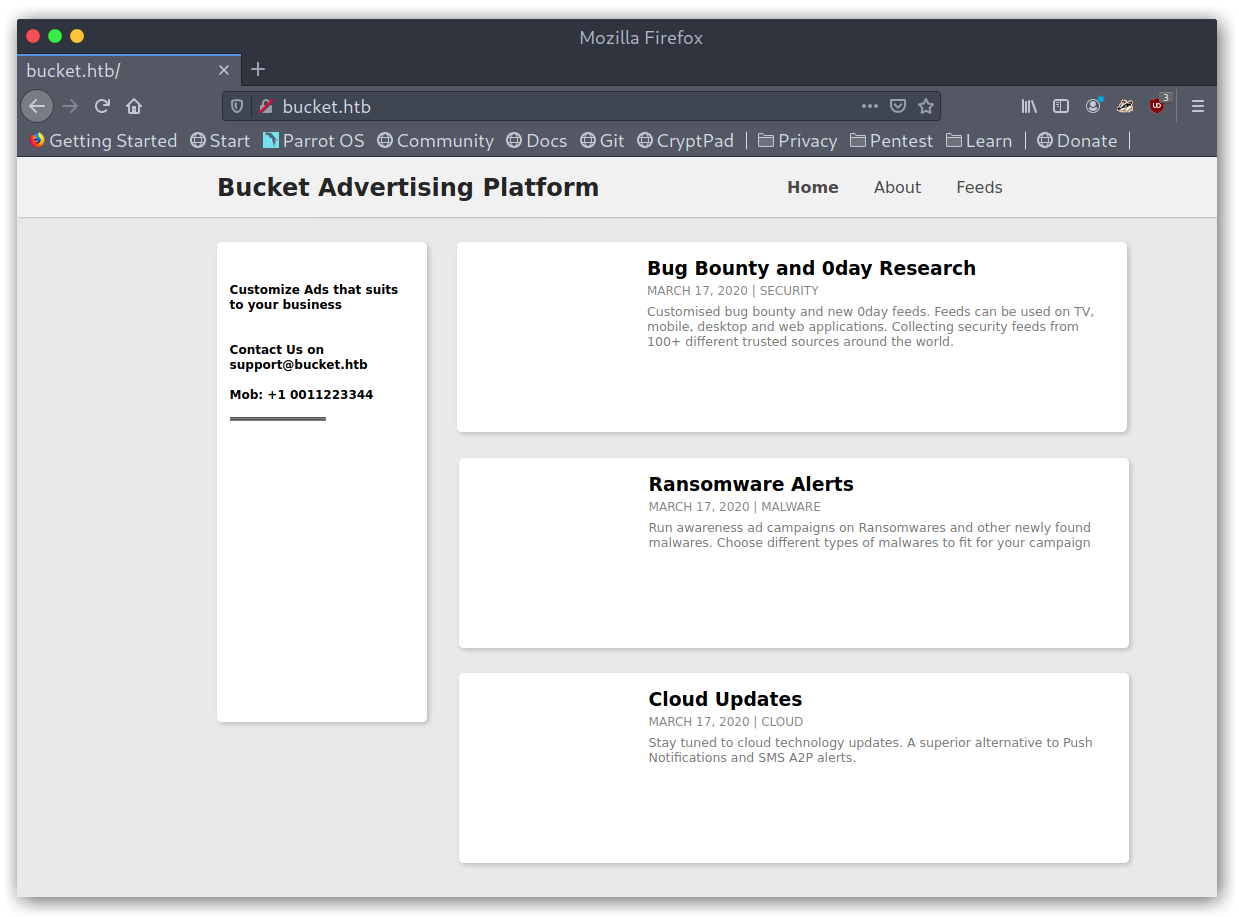 By looking at the source code we can see a new virtual host for the machine: s3.bucket.htb. 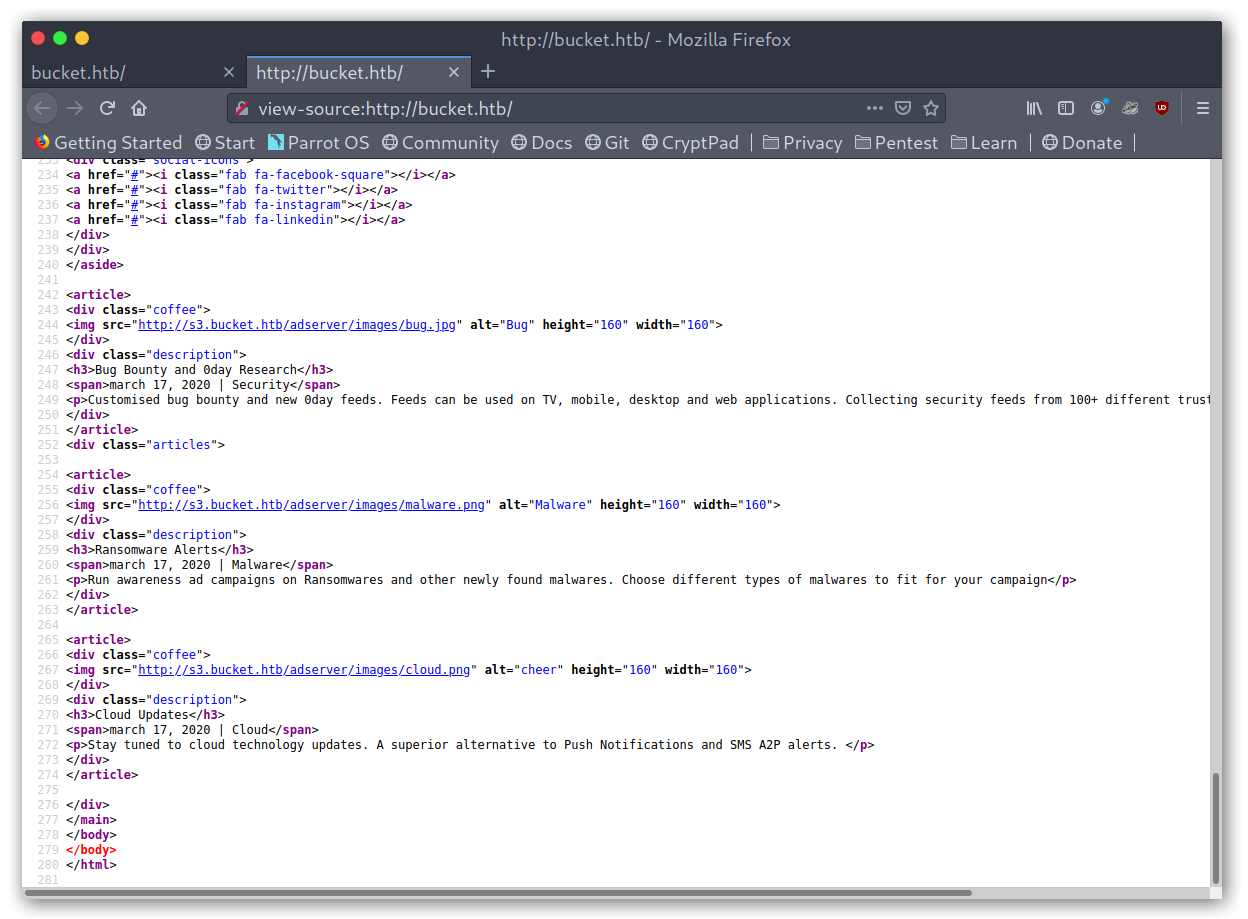 I added it to my hosts file and tried to use the AWS cli to test whether the bucket was properly configured, i.e if I was able to upload files.

Cool, so there was a bucket called adserver and managed to upload files with aws s3 cp poc.php s3://adserver/poc.php --endpoint-url http://s3.bucket.htb. At this point I didn’t realise that I could actually exploit this further and kept searching (silly, I know).

I started bruteforcing and found two endpoints: /health and /shell. 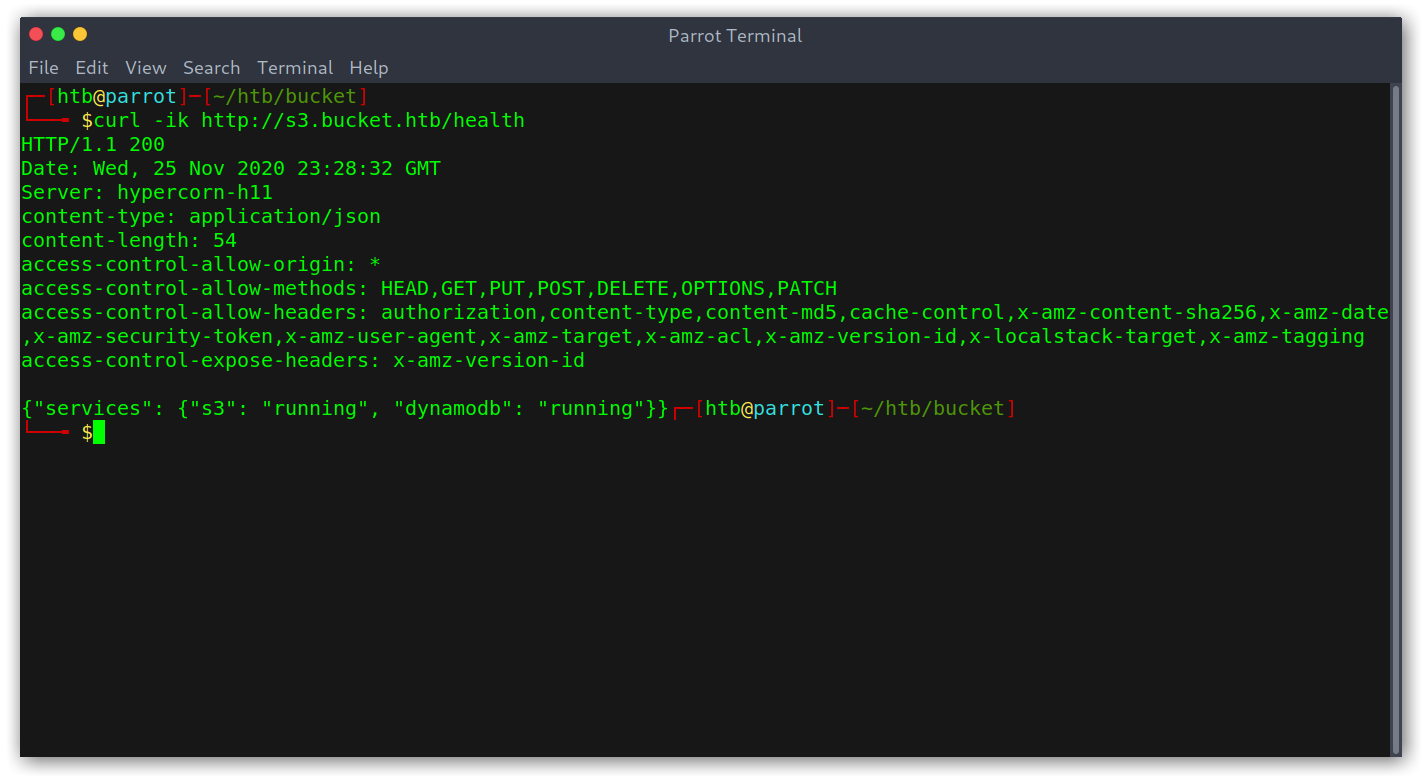 Weird, the /shell endpoint redirects to a weird domain… I was out of ideas while trying things when I accidentally typed /shell/ and was greeted with a console! 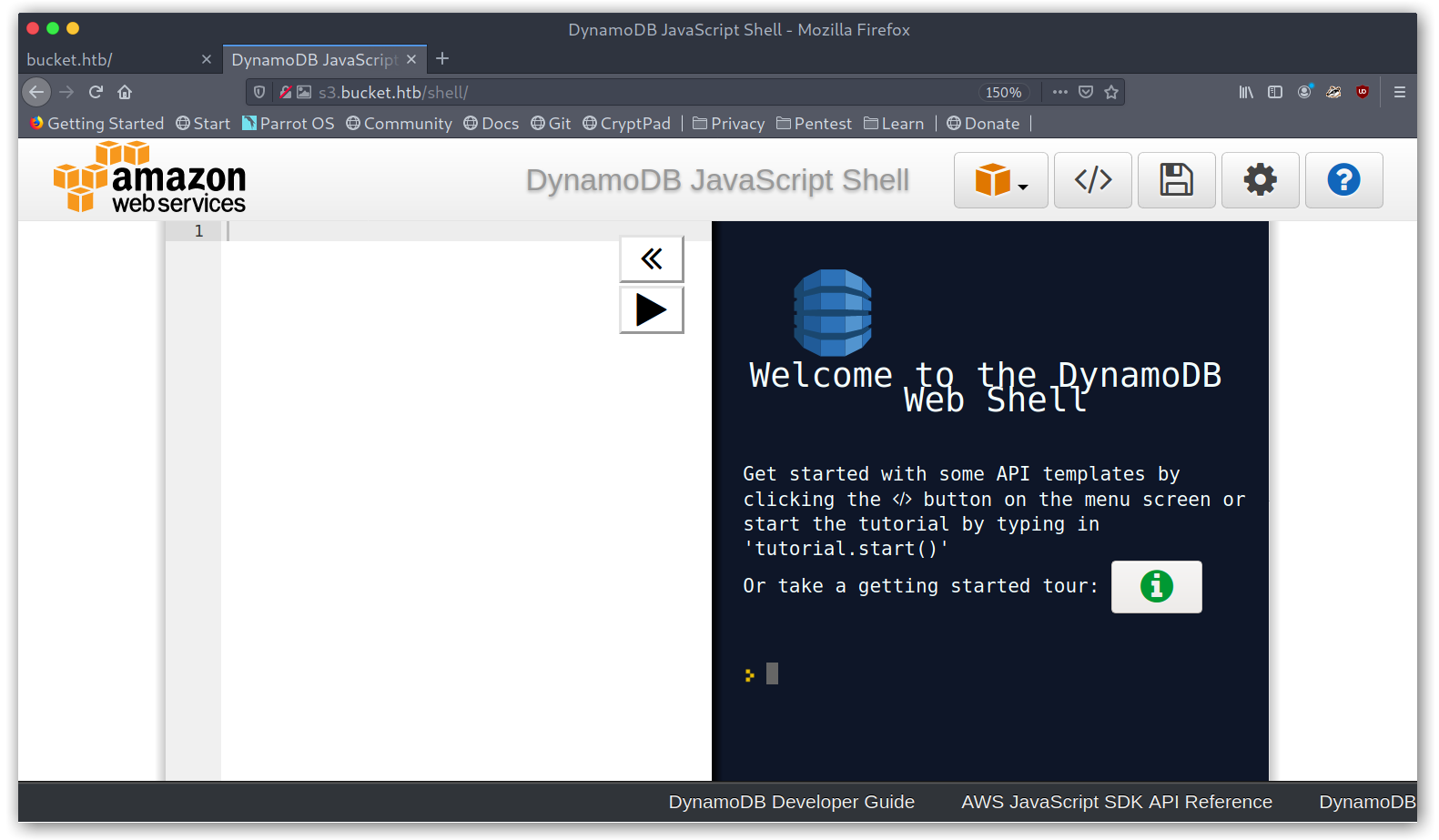 Having never used DynamoDB I started taking a look at the AWS Javascript SDK API reference and DynamoDB and came up with the following JS snippet:

Then I got the table schema:

And finally I dumped the whole table with

Juicy credentials! I tried to use them for SSH but none worked so it seemed like I was missing something…

One thing I wondered about was whether there was any cli command to do what I just did and indeed there was:

I stumbled upon https://s3.bucket.htb/latest/meta-data/ and was puzzled that this returned data, since this was supposed to be an S3 bucket and not an EC2 instance. I tried to get keys but it seemed like this was a rabbit hole so after not finding anything I just moved on.

I went back to the S3 bucket stuff and retraced my steps to realise that I was stupid. The things I tried at the beginning were uploading PHP scripts and then accessing them at https://s3.bucket.htb, which obviously wasn’t working since S3 is only used for static content. What I should’ve done was accessing them through https://bucket.htb, which I knew was linked to the bucket because the pictures on the blog were the ones from the bucket.

Cool so it works, now I just need to upload a PHP script and set up a listener with netcat.

I had to do this a few times for it to work, as it seemed that there was something deleting everything new every some time. Once in I saw that there was a user called roy that had some kind of project.

Basic recon in the box

Interestingly enough, this project thing seemed to be coded to listen on localhost, maybe it is running? 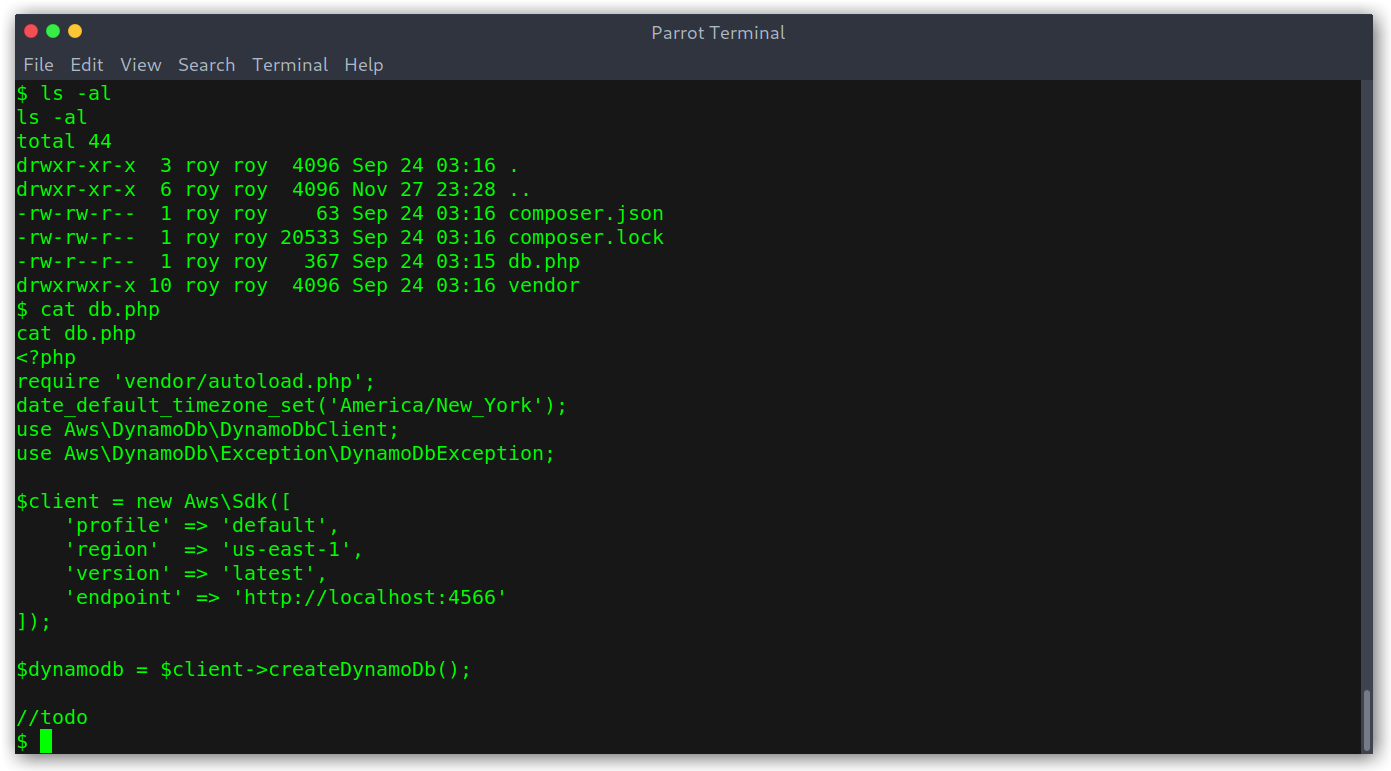 Before doing anything else I thought of improving my shell and figured that maybe one of the passwords I found earlier could work with roy.

The sysadmin password did the job and I was in with roy:n2vM-<_K_Q:.Aa2.

However, there wasn’t anything else interesting under ~/project so I decided to further enumerate the box.

I found a bucket-app directory on /var/www that was new to me so I took a look at it.

It seems that this was the continuation of the previous project I saw earlier, as it has the same configuration for the DynamoDB stuff. There were extra things: 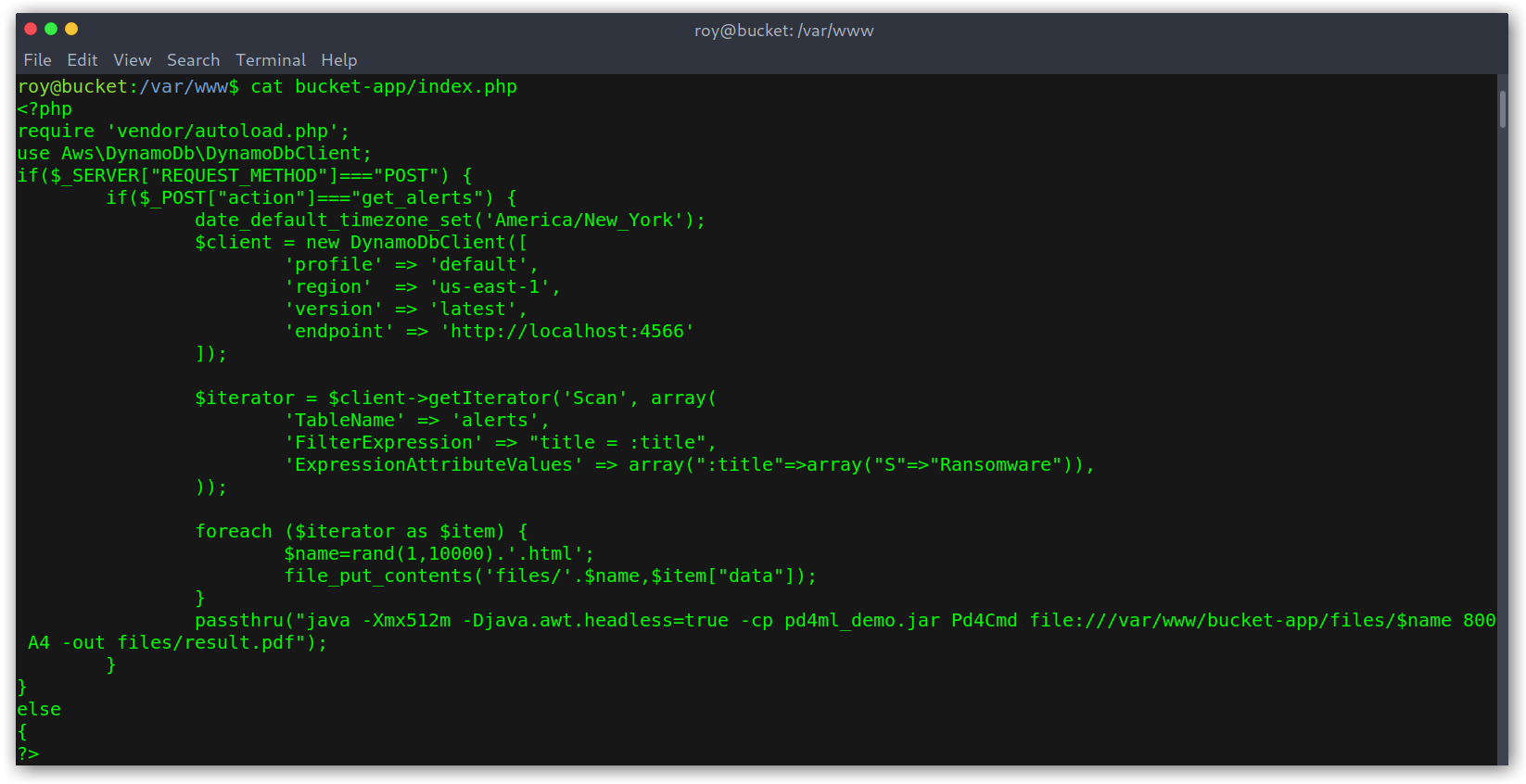 The call to pd4ml_demo.jar, which we saw in the directory list earlier, was interesting. I googled it and saw that it was an HTML to PDF converter for Java. 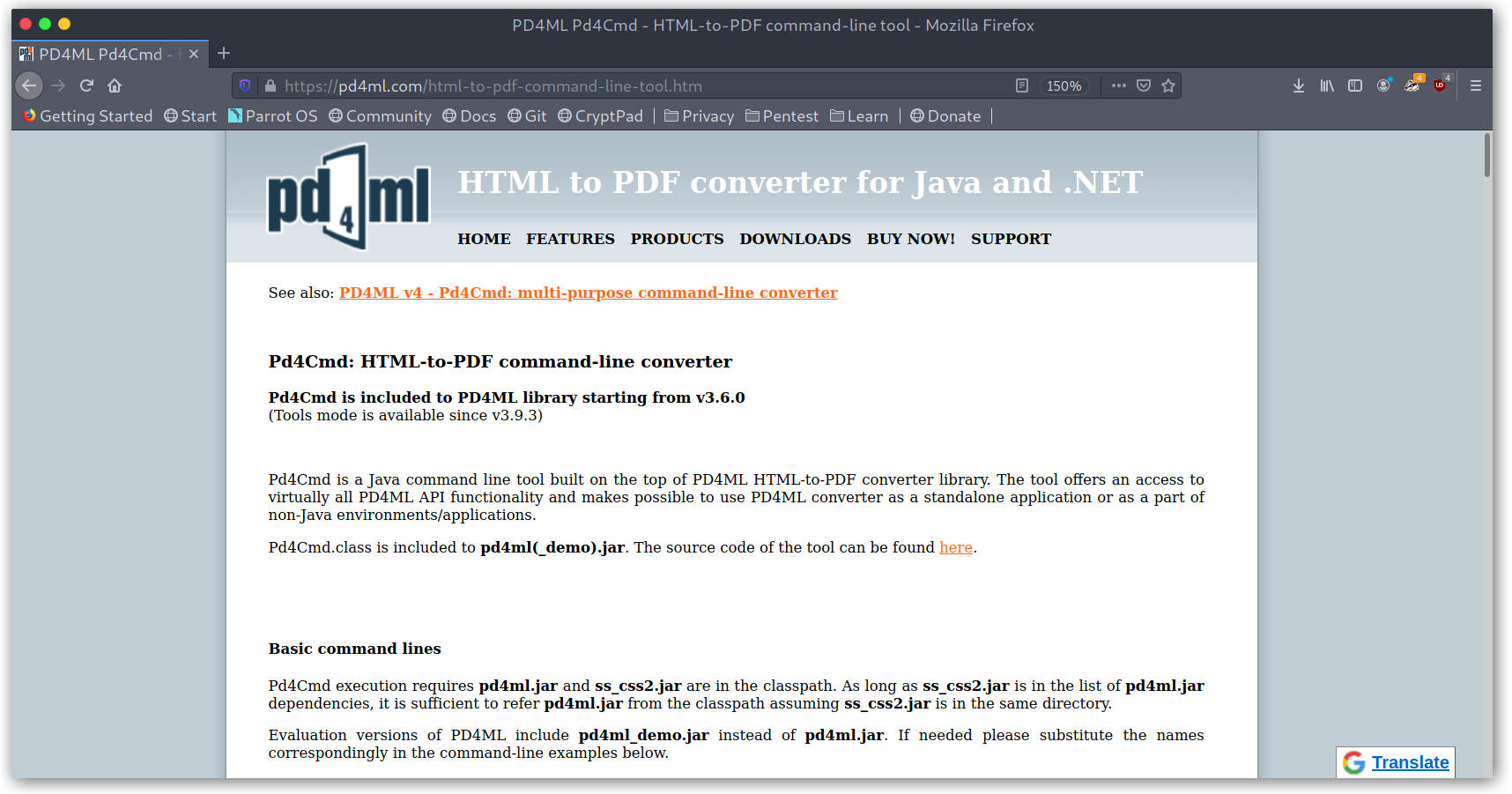 My obvious next step was checking whether this was running on the box so I used ss -lntu to get open ports. 4566 was up, which meant that probably it was!

Right, so now we know that the application is running on port 8000 and can try a POST request with action=get_alerts as data. 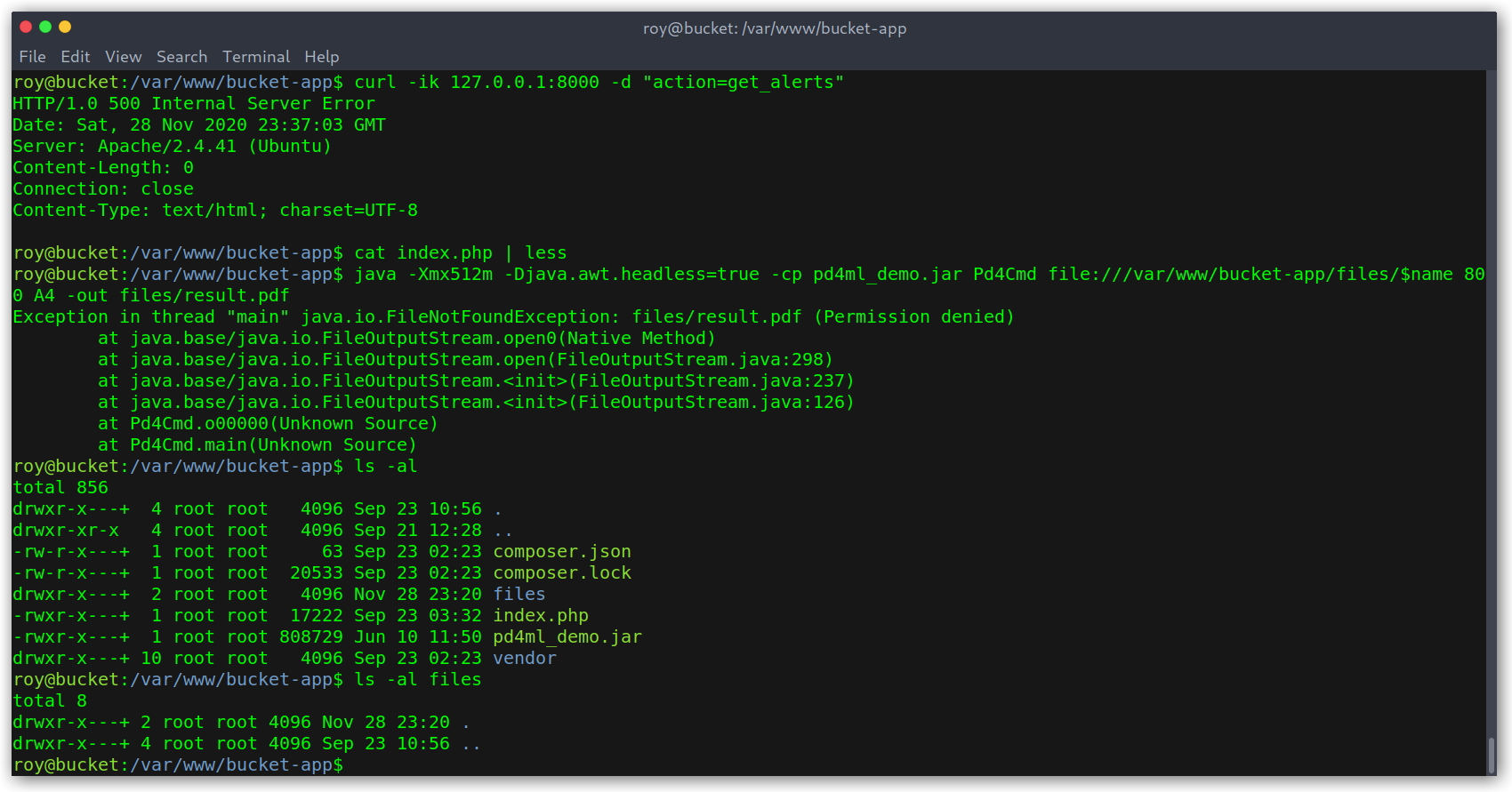 I got a 500, which was weird. Then I run the PDF generation command and it seemed like only root had access to that directory, which meant that the application was running as root. 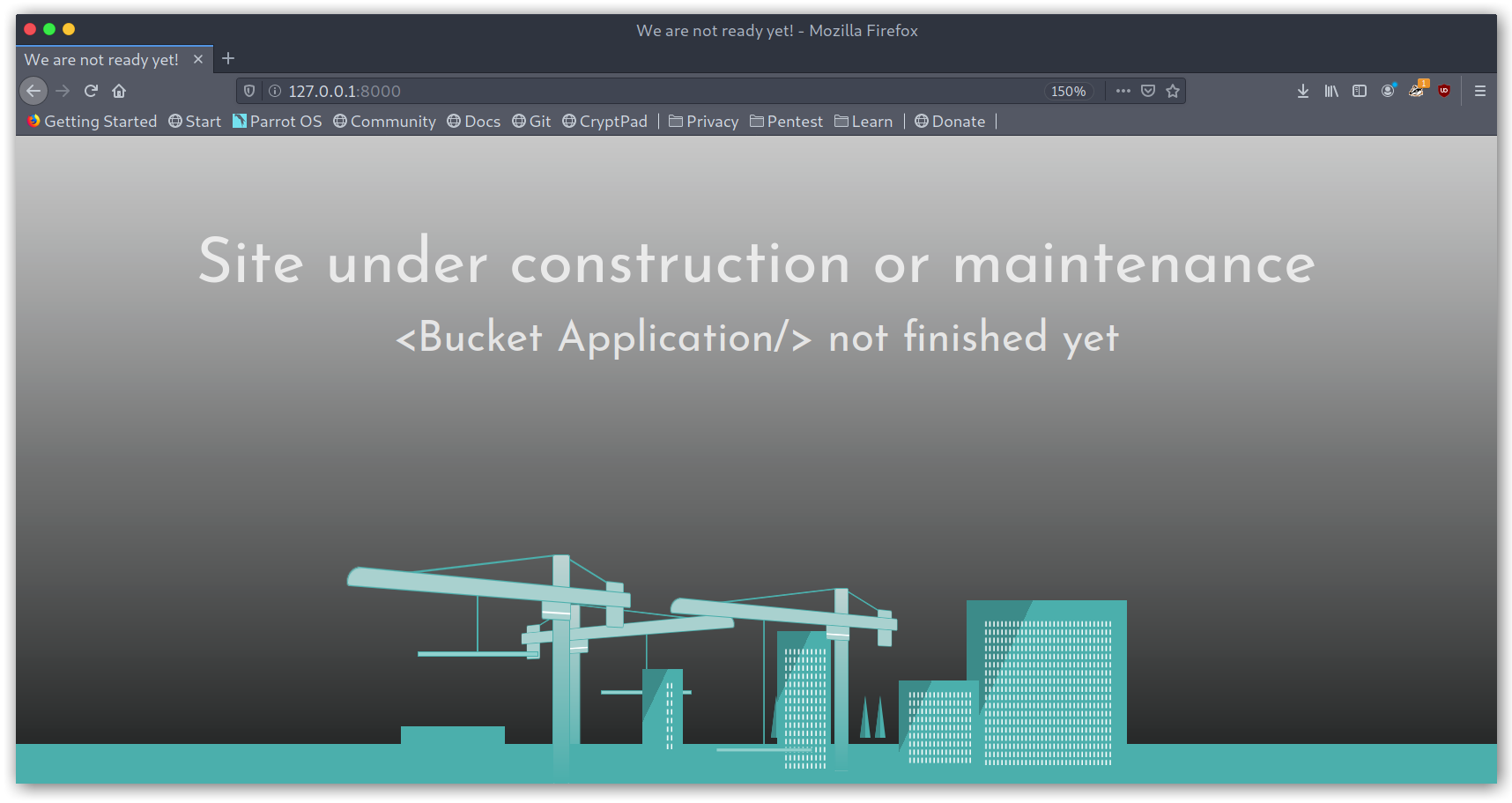 Then I went back to the 500 error and tried to see where it was coming from. Given that the app was trying to get information out of the database I figured the first step should be to check what kind of data it has. To my surprise the alerts table didn’t even exist!

Listing the tables on the local DynamoDB instance

After reflecting on it, this made sense since it was supposed to be an app in development so maybe that part hadn’t been done yet. With all these hints I knew what the way to root was:

This first step wasn’t too complex, it was mainly googling for stuff and finding the correct arguments to pass to the command. Finally I got to:

Creation of the alerts table

2. Adding data to the table

Again, this was based off reading the documentation and googling. The command is simpler than the last one, the only thing to explain is that for each attribute we need to specify the type, that’s why there is an "S" key before the value.

As that was done I tried to run the command and the PDF was generated with the content from the table.

Adding data to the table 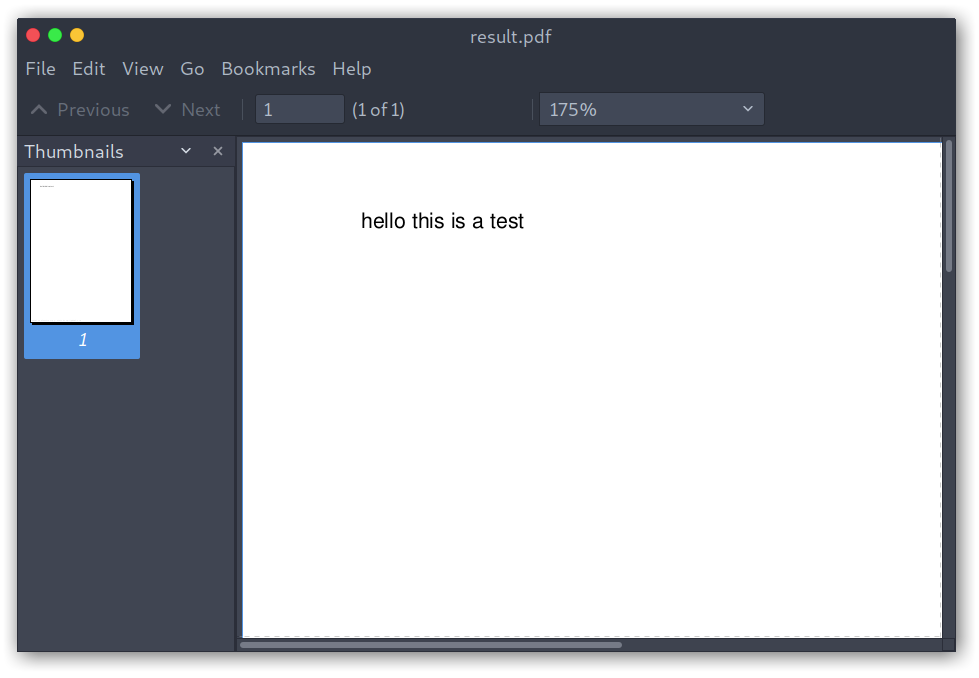 Cool, so now we have the PDF generation working, we just need to find a way to exploit it. Keeping in mind that this was generated with root permissions I thought that we should be able to include local files through some pd4ml special syntax. Following https://pd4ml.com/cookbook/pdf-attachments.htm I got <pd4ml:attachment src="file:/etc/passwd" description="attachment sample"/> and added it to the data attribute:

Note that we need to escape double quotes. I generated the PDF and after running strings the file contents were there!

To get a root shell I included /root/.ssh/id_rsa instead to get the root user private SSH key. Now, I needed to generate the table each time because it was getting deleted so I just combined the two commands in a one-liner:

Then we can just SSH in with the key and get the hash!

As always, someething I like to do when I root a box is to see how things work. On this case there were a lot of scripts in the root directory.

We can see that the local DynamoDB instance works via Docker and that the adserver was being wiped clean every 60 seconds, which was annoying.

Another interesting script was restore.php, called in restore.sh above. This proves my idea that the alerts table wasn’t yet created as $params is only passed to $dynamodb->deleteTable($params) but not to $dynamodb->createTable().

This is everything, I hope you enjoyed the writeup and learned something new. It was definitely a cool box that made me learn a lot about new things, but most importantly taught me to think what the box is used for and where the vulnerabilities could be. If you liked it you can give me respect on Hack The Box through the following link: https://www.hackthebox.eu/home/users/profile/31531. Until next time!