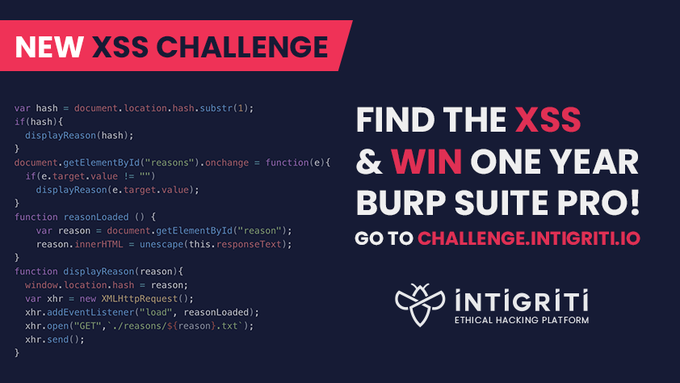 This blog post will go over how I managed to solve the Intigriti Easter challenge, which took definitely way too long. Even though I spent more than 2 days on it, the alert box popping up was very much worth the effort, so gratifying! But enough, let’s dive in!

Main page of the challenge 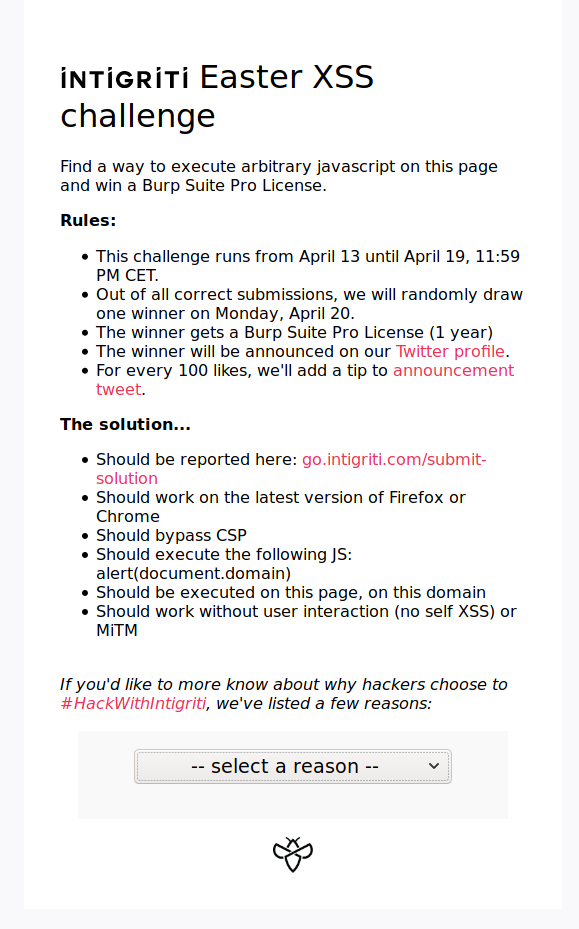 First of all, as always, I took a look at the challenge requirements:

Checking the source code it’s evident from document.location.hash.substr(1) and window.location.hash we need to use the hash part of the URL to deliver our payload. We can see inside the displayReason function there is a GET request to ./reasons/${reason}.txt, which meant that we could control where we sent the XHR. However, using for instance https://challenge.intigriti.io/#aaaa<> as URL resulted in the following response:

Filtering of HTML characters in https://challenge.intigriti.io/#aaaa<>

It looked like the application was filtering the <> characters to prevent the injection. I also tried url encoding them and other characters and nothing, an interesting thing though was the /, when encoded into %2f resulted in the apache default error page which was then rendered! This was a clue that we somehow needed to inject something in a page and then use the reason.innerHTML = unescape(this.responseText); to execute the payload.

Filtering of HTML characters in https://challenge.intigriti.io/#..%2faaaa<> 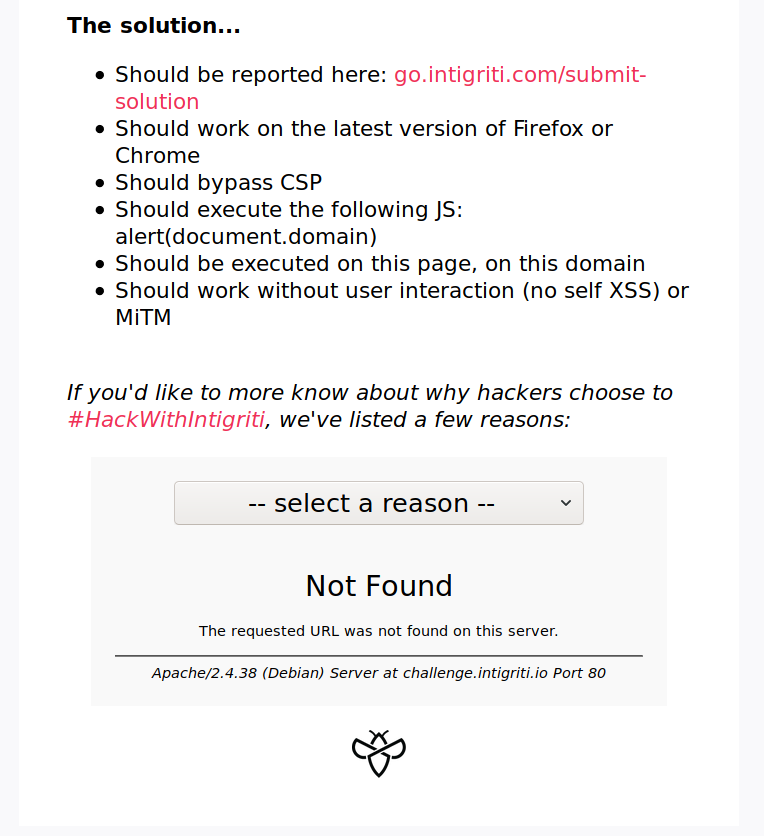 At this point I had a pretty clear idea of what I had to do: get a page where I could reflect double url-encoded HTML characters to then inject into the main page:

I spent a great deal of time looking for it when I realised I had always had it in front of me: I was in an Apache server so server-status could potentially give something interesting, as I knew that some Apache pages had content injections into their HTML pages (for instance, this Hackerone report shows an example: https://hackerone.com/reports/134388).

However, there were some tweaks I had to make to the URL. First of all, we need to go back to the root directory, as in the XHR we make the call to /reasons/${reason}.txt. Secondly, we need to get rid of the extension, which can easily be done by appending ?. 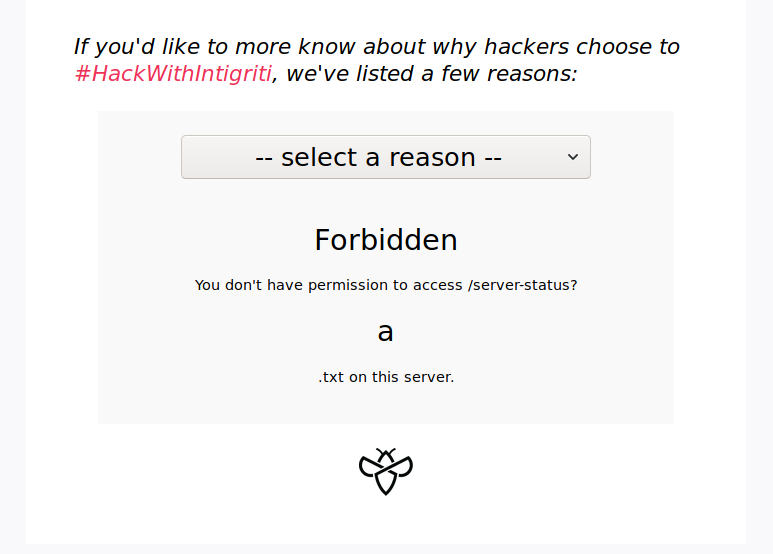 Cool! Now I just change that into a javascript payload and done! I quickly double encoded <img src=x onerror=alert(1)> and clicked refresh but to my frustration I had forgotten something: CSP.

Blocking of inline javascript due to CSP

I checked the header and saw that the page had the CSP policy set to default-src 'self', which meant that the page was allowed to only load resources from https://challenge.intigriti.io.

From here on I was really frustrated, as I didn’t have much experience with CSP bypasses, so I decided to turn to the hints and deduced that we needed to use an iframe. Seemed like a good start. After trying combinations of possible payloads I looked at the documentation of the iframe and found the srcdoc attribute.

At this point I knew what had to be done, just not how to do it. So I kept digging and after many hours it dawned on me: I had had it in front of me all this time! When visiting https://challenge.intigriti.io/aa for example we would get 404 - 'File "aa" was not found in this folder.' as a response. If we look at it closely, that response is valid javascript we can inject into: a subtraction of an integer minus a string! Hence, I could inject something via the filename to have 404 - 'File "'-alert(1)-'" was not found in this folder.' as a response because none of those characters were actually filtered!

Hence, I tried to use <script src=https://challenge.intigriti.io/'-alert(document.domain)-'></script> as the srcdoc value and so the payload (before double encoding it) was: <iframe srcdoc="<script src=https://challenge.intigriti.io/'-alert(document.domain)-'></script>"></iframe>; which bypassed the CSP because the script was loaded from the same domain. Genius challenge!

I put everything back together and got the following URL:

Then I finally submitted it and to my pleasure got the precious alert box! 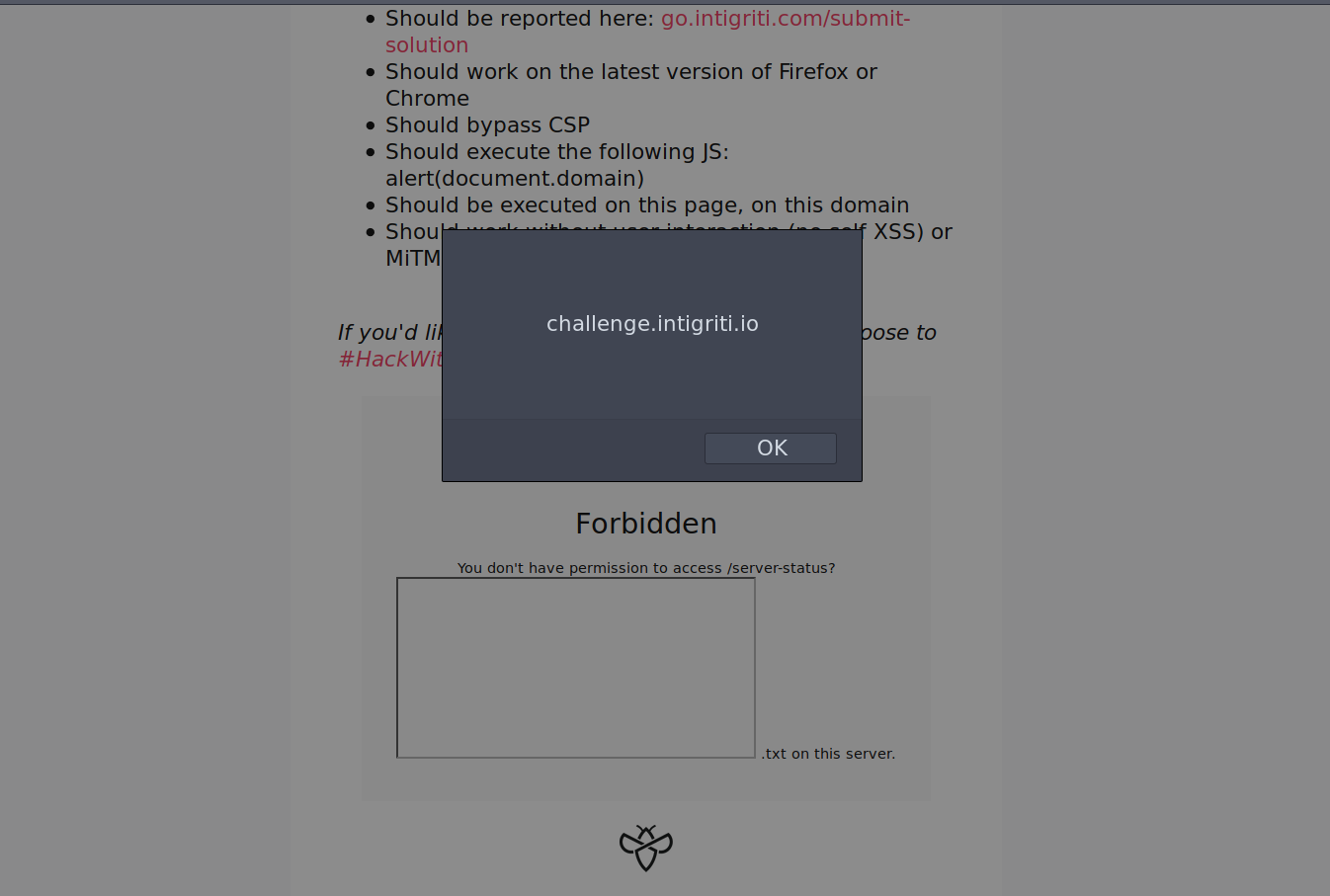 It was a challenging problem but getting the alert box was well worth the many hours I put into, I learnt a ton of things on my way to it. In fact, even if they were not usefult in the end, I learnt a lot from these two resources, which talk about how CSP can be bypassed via iframes, they are worth a read:

Cheers to Intigriti for putting up such amazing challenges. Without a doubt I’m going to save the content injection trick for my bug hunting!

See you next time!

As a bug bounty hunter, one of the vulnerabilities that are learned at the beginning of the road is a subdomain takeover. While the concept of it is simple, just register some domain that hasn’t be...

Note: this is not the classic ‘What is a subdomain takeover?’ post, I’m assuming everyone who reads this already has some knowledge of this kind of issues and don’t explain what a subdomain take...